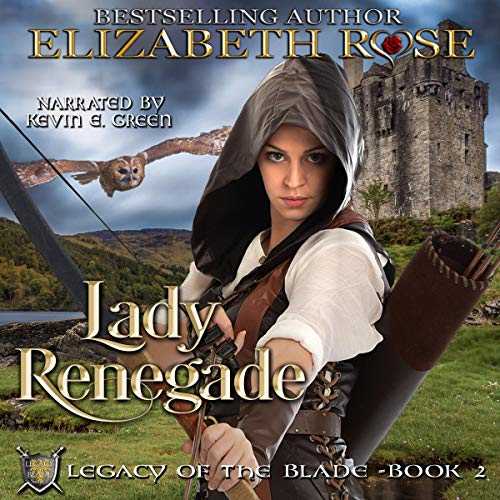 By: Elizabeth Rose
Narrated by: Kevin E. Green
Try for $0.00

Storm MacKeefe is known as the wild, savage warrior called The Highland Storm. However, since he has been disowned by his chieftain father, he is a man who wins his earnings in competitions and through wagers rather than through war.

He is tricked into accepting a wager to find and bring back the leader of The Renegades, a small band of warriors hiding in the Highlands. What he doesn't know is that their leader is Wren, a blind woman, who uses her gift of seeing shadows through the eyes of her animals in order to navigate.

When Storm's plans backfire and he is captured by Wren, he realizes he has met this woman years ago as she traveled with the English, on the night that haunts him still.

Will a Scottish warrior be brought to his knees by a woman who holds a power over him so strong, he forgets she is even blind? Or will her deception make him feel like the blind one instead?

What listeners say about Lady Renegade

Blinded by a hit in her head, Wren is able to become a presence to deal with when she leads warriors to take care of themselves but others want to stop her and Storm must deal with capturing her and deliver her to the person who blinded her.
An awesome story that brings her to her destiny.

What a wonderful engaging story! Elizabeth Rose hooked me in the first chapter and I had to finish it. During Christmas at that. Great narration by Kevin E. Green kept it even more engrossing.

Love is not blind

This is book 2 of the series and kept me engaged. There were parts that I wanted to cry at as it drew me in. This story builds this family’s world more as you hope that they can all reunite. Through tragedy these two stubborn characters find their other half. I loved the build of Ren and the surprise as well as Storm who thought he didn’t know or understand love. I recommend that you read book 1 before reading this as there is many bits and pieces you won’t understand otherwise. I received credit for an honest review.

I loved listening to Wren's story. It is unusual to have a heroine with a disability in a book that is set in the past. The characters and setting were interesting. There was lots of action. The narrator grew on me. I wasn't fond of his female voices in the beginning. He did a great job with the accents and all of the other voices. He made it interesting to listen to.

What a captivating story!

Storm Mac Keefe, a Scottish warrior meets Lady Wren
who at 3yrs. was found wandering the Forest.
This tragedy starts with a family betrayal, murder
kidnapping that takes years to unravel. Storm
grows up without his Mother. These 2 find one
another and begins the journey that leads to
a love story. Elizabeth Rose has brought us
another fantastic story that we just can't
put down. Thank you, Kevin E. Green!

What a romance! With charming hero’s, and rich secondary characters, this story is full of intrigue, adventure & love. This is one of Elizabeth Rose’s best stories. A must have.

Found wandering in the woods at the age of three, Wren doesn't remember who her family is and her remaining family believes she is dead. After a somewhat tragic series of events in her teens and early twenties, she meets Storm MacKeefe (again) and her life begins to fall into place. This was an enjoyable story focused around a strong heroine.

Elizabeth Rose has done it again, with a lively cast of characters... Strong (and hard-headed) Storm, the Devilishly suave Trippet, fortune-telling Zara, young and bright Renaud, the brave women renegades, and Wren, the blind leader of the renegades. I really wanted to like Wren, but she made me so mad with her choices and oftentimes selfish decisions. Storm had a lot to learn, but I think he finally got there in the end! This is part of a series, but it is written well, so can be easily understood as a stand alone. I much preferred Kevin's performance in this reading, as his Scot's burr was more enjoyable, but I still have a hard time with his voicing of women & children.. As always, please use headphones for the bedroom scenes if children are present 😉

Blinded by the search

Lady Renegade or Lady Wren has been searching for her family. Storm MacKeefe is a wild Scotsman looking for her. Little does he know, she is the same woman that has haunted him for 9 years. Wren has been blind since that night. English and Scots are fighting again, and Storm and Lady Renegade are right in the middle of it. Will their fighting come between them. Great narration.

Elizabeth has written another exciting, fun story! She can hold your interest to the end. She has the talent to make me hold my breath at time’s wondering what is around the corner.
Kevin E. Green has a wonderful Scottish accents that makes this one come to life. I loved it!

I absolutely love this book it’s my favourite book of the series lady ren and storm go through a lot. I love that ren becomes a kick ass woman she is strong but does show her soft side. This series is very good I highly recommend it

Storm MacKeefe- after his father disowned him he went out to win money by different bet and other antics.
Wren- has a son by king David, went blind when Lord Bainbridge hit her aside the head. She led a group of women to steal from the English.
I enjoyed reading/listing to this intriguing and unpredictable story set in medieval Scotland and England with complex and many unforgettable characters including , an old gypsy fortune teller (Zara), a cheeky French man, a couple of evil characters that you
love to hate, and bunch of helpful animals. This story is packed with action, danger, excitement, humor, twists, turns, and some surprising discoveries.

Narrated by Kevin E Green who did a fabulous job in telling the story by the vast array of voices that he easily portrayed, He definitely brought the characters and the story to life.

This is the 2nd book of the series Legacy of the Blades. I loved every minute of it. I couldn't stop listening. Kevin Green is a very good narrator he made the story even better with different voices for the each character. Definitely worth a credit. Now on to the next book.

Had to listen to this in one sitting!!

Lady Renegade is the second book in the Legacy of the Blade series by Elizabeth Rose. I've not read the first book in the series so can happily say that this book can be read as a standalone if you so wish.

I had the bonus of listening to this book rather than just reading it. The narration wasn't perfect, but pretty darn close to it. I enjoyed the vast array of voices that he easily portrayed, he definitely brought the characters and the story to life. The story itself was superb and for the first time, thankfully it's a weekend, I had to listen to the whole book in just one sitting. I tried to turn it off to get some sleep, but I couldn't, not until I knew how it would end. So now I am exhausted but want to write my review while the story is fresh in my mind. After that, I think I may just collapse on my bed for the rest of the day lol!

Wren is a blind woman who doesn't let her blindness stop her getting her revenge on the English after she was blinded by one of them during a fight between them and the Scottish 9 years ago. She, herself, is English but her loyalties lay with the Scots.

Storm MacKeefe has been paid to find and bring back the leader of a gang of Renegades who are causing a lot of trouble for the English. Unknown to him, those renegades are all women, and they are led by none other than Wren. He also is none the wiser that there is another reason behind his employer wanting Wren brought to him.

There are so many twists and turns to this story, I don't want to forewarn you about any of the plot other than what I have said. I want you to have the surprises that I did. What I can say is that the love interest is between Wren and Storm but it definitely isn't smooth sailing. Wren is a strong woman and Storm is quite the macho Scot and it's inevitable that there are going to be clashes between them. Both of them have baggage when it comes to their families and/or lack of them. Both of them are wary of love.

Far from just focusing on the romantic aspect of the couple, there is so much more to discover about both of them. There are other fabulous characters in the story too, an old gypsy fortune teller, a cheeky French man, a couple of evil characters that you just want to punch, and there's even a menagerie of fabulous animals including a dog, an owl and a fox! Between them all, they make up a very exciting, emotional, intriguing story which I can't recommend highly enough.

A Renegade wirh a difference

An interesting highland story with a different slant on what a renegade is. A good holiday read.

I have read and listened to a few of this authors books and although the story lines have promise, I find where the story needs more detail it lacks and where it should have less detail it is long winded.