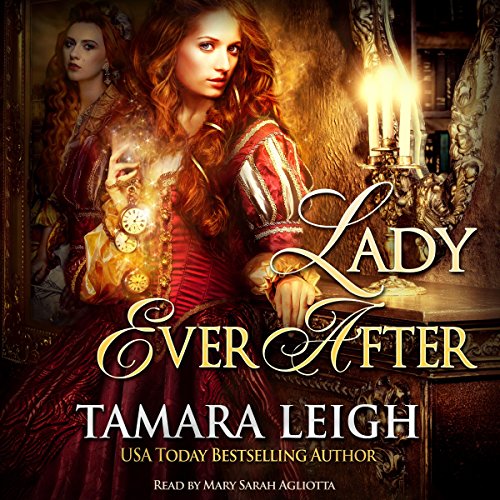 By: Tamara Leigh
Narrated by: Mary Sarah Agliotta
Try for $0.00

From the USA Today best-selling author of Dreamspell comes Lady Ever After, the second medieval time travel romance in the Beyond Time series.

England, 1464. As civil war rages, King Edward IV besieges the northern barons who support the dethroned King Henry VI. Among the last strongholds to fall is Strivling Castle, whose lady gives her life defending her home against the usurpers.

As foretold by her dreams, Lady Catherine Algernon is determined to defend Strivling Castle to the death. But when a besieger saves her life just as her nightmare unfolds, a future is forced on her she never dreamed possible - with a man who believes she is someone else. Who is this enemy who defied fate by averting the mortal blow? And how is she to keep him from laying siege to a heart more guarded than her home?

Successful businessman Collier Morrow has everything he could possibly want, including a priceless, unfinished portrait of the legendary Catherine Algernon. When a lie costs him the woman he loves, he finds himself in the midst of the siege upon Strivling Castle, face-to-face with its defender who is the very image of the love he lost. Given an opportunity to redeem himself, he soon discovers the fiercely rebellious Lady Catherine is not who she appears to be. Should he return to his own time? Or risk the life he knew for another chance at love?

What listeners say about Lady Ever After

After the first book Dreamspell, I thought any sequel would essentially be a rework of the same theme. This was creatively conceived and beautifully delivered. The narrator was again excellent! I wish more authors saw the beauty in providing wonderful literature without debasing language and scenes.

Loved the written version. Captivated by the audio edition. Will happily listen again and again.

So worth your time! This was such an interesting book, it hooked me from the beginning. Love these strories!

Love Tamara books and this is no exception. Even if you don’t care for time travel novels you will enjoy this one. Tamara does not give you whiplash going back and forth between times ever other screen or two. She times it ever so perfectly. Trust me. This one’s worth the read.

Book 1 left something to be desired but book two (which you can read with out book 1) was far far far better written. Then go back and read book 1 to understand how it played a role but again not required to follow the story.
Historical data, fictional storyline, romance and best of a lesson on God and relationship.

OVERALL A VERY GOOD BOOK. LOVED IT. NARRATOR' GREAT AND EASY TO FOLLOW !
GET THIS SERIES. YOU'RE GOING TO LOVE IT !!!!!

one of my favorite authors and narrators!

beautifully written and performed. Tamara and Mary Sarah do it again. loved this book! couldn't wait to get back to reading it

such a great story!

loved every minute of this... sad to see it end. I highly recommend this book... narration was calm, peaceful, accurate & very enjoyable. I usually listen to audible before bed... so her voice most soothing. Characters were interesting & fresh... not your usual time travel saga! I loved it... so will you! ♡

The story was captivating and the characters were very enjoying. I was swept away into this story and the first of the series!! And the narrator voice was perfection for all the characters! highly recommend!

I love a good fantasy! I was very pleased to find out that Ms Leigh tackled a new genre. The book was formidable, it brought tears to my eyes!