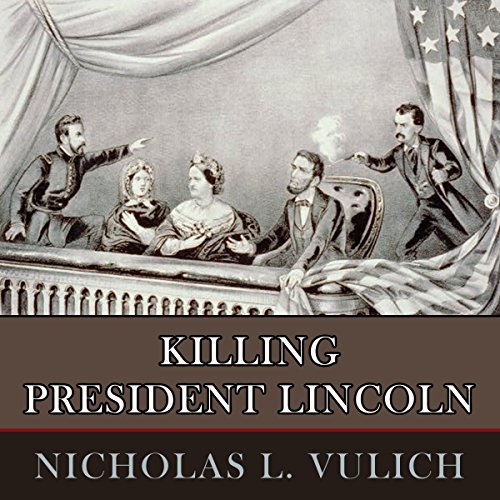 By: Nicholas L. Vulich
Narrated by: Richard Rieman
Try for $0.00

Have you ever wanted to know more about history, but don't have time for the long version?

This book brings you a short account of the Lincoln Assassination. In less than 60 minutes you will meet the key players, learn the pertinent facts of Booth's plot, and discover the fate of the individual conspirators.

Lincoln's bodyguard that night was John Parker, an undistinguished Washington, D.C. policeman. Parker was supposed to be stationed in the little passageway outside of the entrance to the Presidential Box guarding Lincoln. Apparently Parker abandoned his post several times during the performance, once to watch the play from the first gallery, and after the intermission he disappeared altogether with Lincoln's footman and coachman to visit a nearby tavern.

As a result, the Presidential Box was left unattended when Booth arrived.

Booth crept in through the unguarded door. After entering the passageway to the Presidential Box, he grabbed the block of wood Spangler left there for him, and barred the doorway shut. From there he moved down the passageway, coming upon the two doors to the box Lincoln was in.

At 10:20 PM Booth peeked in through the door with his Derringer raised and leveled. He fired a ball into the back of President Lincoln's head. Lincoln slumped forward, motionless.

Inside the box it was clouded with white smoke from the powder and shot. Mary Lincoln let out a screech when she realized what happened. Major Henry A. Rathbone jumped to his feet and began struggling with Booth. Booth lashed out at him with his dagger. He thrust at Rathbone's heart. Moving quickly Rathbone parried the blow with his arm. The dagger dug several inches deep into his arm, and tore into his chest.