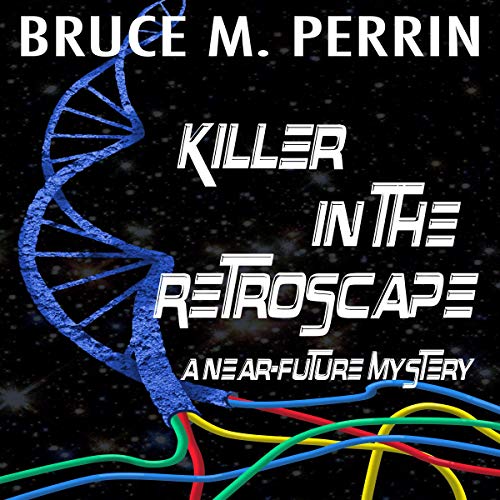 When law enforcement concludes his death was a suicide, Doug and his wife Ali are dumbstruck; they wonder what could explain such a needlessly violent and lonely death in a future where such actions are unimaginable.

Trying to unearth a killer, be it either flesh and blood or the cumulative stress of life, Doug creates a mental landscape of Josh’s past, a retroscape, starting in the mid-2030s.

Among its landmarks are:

In the end, determining guilt in a retroscape littered with suspects tells Doug more about humanity, technology, and himself than he ever would have imagined.

What listeners say about Killer in the Retroscape

As a representative of AudioBookReviewer.com here is a review on Killer in the Retroscape: A Near-Future Mystery written by Bruce M Perrin. This slow burn futuristic mystery is a must listen for Sci fi and or mystery fans alike. The author painted a realistic future based on real world data collected in 2018 forecasting what technology and life would be like 50 years in the future. Each character in this tale was well flushed out and the fact that the protagonist is a retiree was so unique. This future world where robots and artificial intelligence do all the work for humans forming an unknown dependency was a blast to explore. As soon as you think you have this mystery figured out the ending will turn you on your head.

The narrator Denver C. Risley's performance was middle-of-the-road. His voice acting was consistent throughout but lacked the vigor of a more seasoned narrator. From what I can tell this is his first narration job, at least on audible. He has potential and I can see him improving as his career progresses.

Editing, quality, and production fell short with most books I have listened to.  It was clear but had issues with the cuts in between chapters and too much dead air.

Is this our future?

This sci-fI mystery really got me thinking. In the investigation of the untimely death of his friend, Doug gigs in to find the shocking explanation.

Bruce M. Perrin certainly did his research. Building upon the technological advancements that we have undergone, he puts forth a very plausible future scenario. Great story with a fantastic twist at the end.

I enjoyed Denver C. Risley’s performance. I thought he was consistent throughout, and I didn’t encounter any issues that detracted from the story.

Quite A Different, Extremely Interesting Story!

Wow This one really makes a person think. So much is referenced regarding now a day events.
This is a fictional possible future American and the different things brought about by cause and effect that could be possible.

This book timing is amazing! It certainly makes you think of what is going on in our Covid-19 days. Very well done! Kudos to the author and the narrator for bringing this book to life!

What will the future look like? Killer in the Retroscape is a near future sci-fi that lavishly describes a fair idea while presenting an intriguing mystery. An industrial psychologist is unconvinced his old co-worker and friend took his own life when he’s found dead.

Exploring the future in Perrin’s Killer in Retroscape world was a feast for the imagination. Much is simply details coloring in the backdrop, but it is also what lies at the heart of the story. I really liked the main character, Doug, who is doing the investigation along with his intuitive and bright wife who is brilliant in the field of medicine and his virtuent assistant an A.I. that helps him create the retroscape of memories he uses to aid in solving the mystery.

The actual mystery stays in the background many times in the story though it is there and Doug is working through what he knows from the past as well as a few clues he must find from outside sources. There are dragging spots when too much description occurs, but for the most part I was right in the moment and enjoying it all. I had my suspicions about the solution and, happily, I was not wrong- though there was a twist that got me near the end.

Denver Risley was a new-to-me narrator who I thought matched Doug’s reflective and analytical personality well. He had no trouble with the female, AI or automated voices either. A strong, versatile voice in fact. The quality of the production was good.

All in all, Killer in the Retroscape was an engaging sci-fi mystery that was strong on the sci-fi and left me interested in more of the author and narrator’s works.

A great story that pulls you in to an almost plausible reality with a twist so smooth if you clear your to you'll miss it! Denver does a great job keeping each characters voice so recognizable and consistent you don't even need to hear which character is speaking. The world created is so close to how we live today it's not a real stretch to imagine everything in your minds eye.

I enjoyed this book. I love a good mystery and although this is a little different to what I am use to listening to, the blurb sounded interesting enough that I have it ago. Glad I did because I really enjoyed it and once I started I didn't want to stop until the end. With everything going on at the moment it really resonated with me and definitely have you thinking about the story long after it has finished. The story does jump about as the main character looks back on his memories to see if he can find a clue to the murder of his friend, so you need to concentrate and it is not the type of book that you want lots of interruptions during (so lock the door and enjoy). The author has a very good imagination and a great way with words, this meant you never felt left behind when things got technical and I enjoyed the authors vision for the future, especially the way the main character interacted with the robots. The characters were also good and well rounded. So over all a great mystery with a futuristic twist.
Doug has lost contact with his best friend but when his ex wife asks him to check up on Josh because she is unable to get in contact, he had no idea of what he would find. His new wife, a high Tec robot, turned off and his dead body in the garage. The police believe it to be suicide of a reclusive man but Doug thinks otherwise and so sets out to visit the last they both shared to find a clue why his friend might have ended up dead. They survived the zombie pandemic but life for everybody would never be the same. The technology world took off as a result, could that have something to do with the dramatic change in his friend over the last few months of his life? Or could it have been a more human cause?
I liked the narrator and thought he did well with both make and female voices.
I was given this free review copy audiobook at my request and have voluntarily left this review.