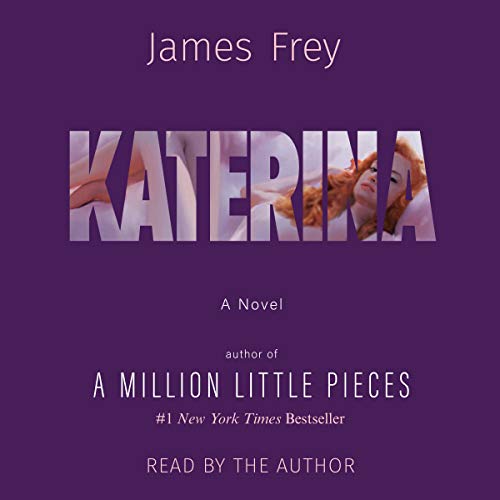 A kiss, a touch. A smile and a beating heart. Love and sex and dreams, art and drugs and the madness of youth. Betrayal and heartbreak, regret and pain, the melancholy of age. Katerina, the explosive new novel by America’s most controversial writer, is a sweeping love story alternating between 1992 Paris and Los Angeles in 2018.

At its center are a young writer and a young model on the verge of fame, both reckless, impulsive, addicted, and deeply in love. Twenty-five years later, the writer is rich, famous, and numb, and he wants to drive his car into a tree, when he receives an anonymous message that draws him back to the life, and possibly the love, he abandoned years prior. Written in the same percussive, propulsive, dazzling, breathtaking style as A Million Little Pieces, Katerina echoes and complements that most controversial of memoirs, and plays with the same issues of fiction and reality that created, nearly destroyed, and then recreated James Frey in the American imagination.

Don't call it a comeback

Yes. This novel is a cliché. One where an aspiring young writer journeys to Paris, languishes as he struggles to write the "great American novel," falls for a beautiful model in the City of Love, and so on the story goes. But I happen to love a good cliché when told as well as James Frey does here. It gave me some serious The Sun Also Rises vibes, just with more phenomenal pacing that gets your heart rate up while listening, with the author’s voice driving. I don’t want to spoil this for anyone, so I’ll make this brief, but I also shed a few tears at the end. It’s that good. My advice? Make this your next listen. You don't have to call it a comeback, but this is the James Frey writing that captivated so many when A Million Little Pieces first came out. —Kyle S., Audible Editor

What listeners say about Katerina

James Frey is a controversial figure in the literary world. He lies in memoirs and tells truth in fiction, blurring the lines between genres and catching hell for it from critics. His writing style is different, and he uses tons of profanity. All of that aside, Katerina is damn good audiobook. Say what you want about the man, but it's not everyone who can write a such a story about themselves, baring it all: the good, the bad, and the ugly.. James Frey isn't the world's best narrator, but he's the best narrator for this book. Much respect.........

A Million Little Pieces, an Oprah book club selection that millions read and loved, became a huge fiasco and embarrassment for James Frey when it was outed that Frey's non-fictional story with his struggle with addiction and recovery was mostly lies and embellishments. Regardless of how his readers felt about his book, one thing remains true: James Frey is a hell of a good writer. He followed up 'A Million Little Pieces' with 'My Friend Leonard,' which was an extension of some of the characters he met in rehab, and I found that book equally appealing.

Katerina is sort of hard to describe. It emphasizes (surely after the hoopla with A Million Little Pieces) that this book is a work of fiction. I believe that Frey wrote this book about himself, and he embellished, as he did with his others. It shows the person he is, his love for literature, and his attitude of not really caring what others think. One line in the book that was really poignant was "I didn't care about the money and the success, it was the climb to the top that I cared about, and I miss that."

A young dreamer with a love of real literature (especially Henry Miller) goes to live in Paris and soaks up culture by simply being places with his notebook, wine, sometimes drugs, and his mind. He discusses his life back in the 90s and his life today loathing his corporate world, and also the love of his life and how they met. His words are crass, yet beautiful. They are obnoxious, yet wise. They are hard, and soft and full of hate and love. They celebrate the beauty of depressed and poetic literature and the raw newness of it's discovery. This book is fluent, yet written in Frey's choppy style. It's narrated by Frey as it is written, with run on sentences, monotony, and a faint lisp. It's educational, sad, happy, beautiful and ugly, and in the end not so different from Faulkner and Miller, and every one of Frey's heroes who have made a great societal and intellectual impact on the free thinking literary minds in our world and worlds past.

If you didn't like Frey's other work, you may find this boring, trite, and pointless. I feel like I caught a piece of the millions he shared, and I feel like this, albeit fiction, is a masterful compromise on his part- a way to say 'screw you' to the masses with discretion. This is a work of fiction, but so much of it is not. And, if you like the book or not, I don't think Frey will care.

Solid 4 stars- next time he gets five if he doesn't throw in the 'fiction' disclosure. Love your mind James- stay sober, my friend.

I've read all of James Frey's books and I love them all. He's a fantastic storyteller and wonderful at developing characters. Katerina is another gem. It was a little less entertaining for me than A million Little Pieces. My Friend Leonard and Bright Shiny Morning...but it's extremely close. Really cool story done in a unique way. I don;t want to give away too much of the plot but it's basically a love story (with some drugs, sex, booze, and other fun stuff thrown in). It't definitely not a sappy love story. There are some real good details thrown in.

Again, I love James Frey. Love his style and his writing. So when I saw he was narrating I was actually pretty excited. But unfortunately I was disappointed. His performance is very monotone. So the one weak spot for me is the narration---but it's not bad enough to keep from listening to this one in my opinion. It's well worth the credit and 7 hours of your time. Especially for Frey fans....but also for anyone else looking for a unique novel.

James Frey should stick to writing and leave the narration to professionals. I couldn't bare to listen to it.

If only I could return this book. I could not even finish it, and the fact that he narrated it made it even worse.

This wasn’t a book

This was an extremely repetitive thought process read as a completely redundant and monotone run on sentence. It was also a lot of nonsense just to have make the opportunity to justify his scandal.

I loved ever bit if it. In the beginning, I wasn't too fond of the narrating but it grew on me. Frey becomes the actual main character. loved it!

I love it. I’m happy he did the voice. I also love Tropic of Cancer, and feel much like he once did, but didn’t get laid as much.
As a write, it speaks to me deeply. I love his fever for words, his passion for life, his quest to be raw.
He is the Henry Miller of our times. He writes with great virilely about sex and being young and wanting to get high.
The love story is so sad and it’s all so well told. The end is crushing and amazing.
I couldn’t want more in a book. Grateful some can tell it so well.

James Frey had me hooked since his first book, A Million Little Pieces.

I love his writing style and his depth. I guess what distinguishes him
from many others is his stories are so raw. I am always deeply moved
by his works.

I worked in a busy cardiac unit as an RN and the first and only time I ever
brought a book to work was My Friend Leonard. I simply couldn't put it down.
( but I admit I waited until lunch to indulge lol)

I love all his books and immediately get them when they come out.
I haven't been disappointed yet.

I can't wait for his next one.

I'm so glad he narrated his book. Even better!