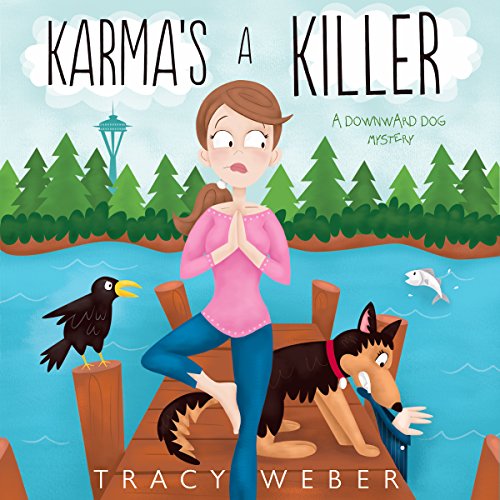 When Seattle yoga teacher Kate Davidson agrees to teach doga (yoga for dogs) at a fundraiser for a local animal shelter, she believes the only damage will be to her reputation. But a few downward-facing dogs are the least of Kate’s problems when an animal rights protest at the event leads to a suspicious fire and a drowning.

The police arrest Dharma, a woman claiming to be Kate’s estranged mother, and charge her with murder. To prove Dharma’s innocence, Kate, her boyfriend, Michael, and her German shepherd sidekick, Bella, dive deeply into the worlds of animal activism and organizational politics. As they investigate the dangerous obsessions that drive these groups, Kate and her sleuthing team discover that when it comes to murder, there’s no place like hOMe.

"Weber's clever assemblage of suspects is eliminated one by one in her entertaining novel." (RT Book Reviews)

"[Weber's] characters are likeable and amusing, the background is interesting, and the story is ultimately satisfying." (Ellery Queen Mystery Magazine)

"A wonderful story for dog lovers, with the other human characters being just as likeable." (Suspense Magazine)

"Crazy, quirky critters and their odd, yet utterly relatable human counterparts, make Karma's a Killer an appealing story. But when you add the keep-you-guessing mystery with both laugh out loud one liners and touching moments of pure poignancy the result is a truly great book!" (Laura Morrigan, national best-selling author of the Call of the Wilde mystery series)

What listeners say about Karma's a Killer

Would you listen to Karma's a Killer again? Why?

Yes but not for awhile it is a good effort at humor for dog lovers and those who would enjoy a light mystery.

The overall funny tone to the story.... it is not difficult to digest for a dog or a human.

Have you listened to any of Anne James’s other performances before? How does this one compare?

Its Yoga time for dogs.

Tracy Weber's books pull me in from the very beginning. Must be a dog thing, as I'm not a yoga person. I found the one liner's to be laugh out loud funny. Some of the characters were so endearing while others were not. I found myself rooting for some of the birds too! I loved how the author wrote some very unexpected twists in the book. Anne James did a great performance with the various characters and their distinguishable voices. I like how this book is both a standalone listen and has characters from the previous books in it. I requested this review copy audiobook and have voluntarily written this review. I will definitely listen to more books by this author and narrator.

I was given this free review copy audiobook at my request and have voluntarily left this review, and found it very enjoyable. A fund raiser for a local animal rescue goes terribly wrong and Kate, the yoga instructor, is right in the middle of it. Kate struggles to deal with new knowledge about her past as she tries to solve a murder. Chaos and humor is the result in this delightful tale that is filled with unique and interesting characters.

Would you listen to Karma's a Killer again? Why?

Yes!! This was the 1st one of the series I listened to. I'm going to listen to the first 2 & re-listen to this one.

I loved them all, especially Kate & Renee. They are so adorable!! I have an image of what they look like. I could see them, the area & the situation so clearly.

Have you listened to any of Anne James’s other performances before? How does this one compare?

No. This was my 1st. I will listen to other narrations by Ms. James. She is great!!! She really knows how to bring the characters to life & add feelings to the story.

Yes. Actually, there were quite a few. The characters are flawed, but redeemed. I love that. I could actually see myself as their friend & part of the community. I really enjoyed this book!!

This was so good!!! Amateur sleuth books are some of the favorites. I love the blundering & how they find the answers. This book was funny, sad, delightful, insightful & interesting all at the same time. Kudos to to Tracy Weber!!! I will be listening to the entire series.

This is a great read. I thoroughly enjoyed this book. I love the fact that dogs are learning yoga. The narrator does a wonderful job bringing the characters to life.

A fun read for a relaxing weekend

Karma's a Killer by Tracy Weber is the third in a series of cozy mysteries that features Kate Davidson, a yoga instructor, and her faithful canine companion, Bella. While this book is the third in the series, it stands alone and can be read independent of the other books in the Downward Dog Mystery series. The story centers around the murder of an animal rights activist, Raven, and the murder suspect, Dharma, who happens to be Kate's estranged mother. As a result of these tumultuous events, Kate finds herself in the midst of an informal investigation and race to find out the truth about her mother.

I know the old saying is you can't judge a book by its cover, but this cover art was just so fun and piqued my interest. Once I started listening, the author wasted no time getting right to the action, thus engaging me as a reader. Weber's writing style is certainly suited for audio reading/listening. You can really see what she is describing. James, the narrator, also did a good job acting out the character's voices, making it easy for the reader to follow the plot. Overall, I found the story to be fast-moving with enough mystery elements and captivating dialogue to keep the reader following along. I also appreciated the strong portrayals of women in this story, specifically that of the protagonist and her best friend, Rene.

I have very few critiques. At the beginning, I found the audio to be a little muffled and not as clear as some other audiobooks I've listened to; however, over time it got better and there was more clarity. I also could have done without Kate's seemingly obsession with weight. I would classify this book as chick lit, and I think the focus on women's physical appearance was a bit problematic.

Recommendation: I really enjoyed this book, and I would recommend it to anyone interested in cozies, mysteries, or just a good book to enjoy over a relaxing weekend.

Thanks to Midnight Ink and Audiobookworm Promotions for an Audible.com copy of Karma's a Killer by Tracy Weber. Regardless of whether I purchase a book, borrow a book, or receive a book in exchange for review, my ultimate goal is to be honest, fair, and constructive. I hope you've found this review helpful.

KARMA’S A KILLER is the third book in the Downward Dog Mystery series. While it mostly stands on its own, it would be better had I read/listened to the previous stories as there are numerous references to those previous incidences.

In addition to the whodunit mystery and animal rights activism, there is a family reunion (Kate’s dead mother isn’t so dead after all) and huge doses of healthy yoga references. I happen to love yoga; it’s good for stretching muscles and relaxing the body and mind. I actually found myself wishing I weren’t driving just so I could do the positions with Kate’s students!

I loved this cozy mystery that kept me entertained and engaged from beginning to end. Bella, the dog, may be my favorite character, but the animals usually are! Bella isn’t the only animal in this wonderful story. There are lots of dogs, cats, goats, a pigeon, and a crow and they all have such fun and quirky personalities.

The mystery is well thought out. I love the characters, even the ones meant to be hated. There is nothing better than a redeemable “bad guy” and there are a few of them in this story. I love that the people are flawed – real. Kate has a temper, Michael is messy, and her very pregnant friend has a fiendish sweet-tooth. They are fun and funny; quite honestly, the kind of people I would want as friends.

This is the first story I have read from Tracy Weber and I must say I like her style. Well done!

Narration: The narrator, Anne James, has a melodic voice and did a fantastic job of maintaining my interest and bringing the characters to life.

Note: while I was given this book as a gifted audiobook copy, my opinions are my own and are given freely.

This is a great book with a wonderful story and well developed characters. The story flowed very well and was very enjoyable. This book will keep you reading long into the night and you will not want to put this book down until you finish. This was such a great read and full of surprises. The narrator did a wonderful job with this book. The narrator did a great job with the different voices of each character in this book. It was very easy to listen to and I didn’t want to stop listening until the end. If you are looking for a great book with well-developed characters then you need to listen to this book. I am looking forward to listening to the next book by this author and narrator. I voluntarily reviewed an advanced reader’s copy of this book. The free book held no determination on my personal review.

Kate finds herself in the middle of another murder investigation. First an animal rights activist group crashes their fundraising event, then the leader of the group is found dead. Kate gets the shock of her life when her long lost mother appears and is actually part of the group. But before Kate gets a chance to really get to know her she's arrested for the murder. Characters form previous books appear in this adventure which makes you feel right at home. The story is fun and has some great quirky characters. Narration is very nice and easy to listen to.
I was given this free review copy audiobook at my request and have voluntarily left this review.

I loved this book. I didn't know it was a series but I intend to read/listen to them all. This book was exciting and funny. Who ever though of doga. The characters was well written. The story draws you in and keeps your attention. A murder happens and surprise Kate finds out that her mother accused of murder The narration is fantastic. She gave the characters their own distinction voice. I would recommend this book to anyone who loves a light mystery book. Love the characters and the dogs. I was given this free review copy audiobook at my request and have voluntarily left this review.