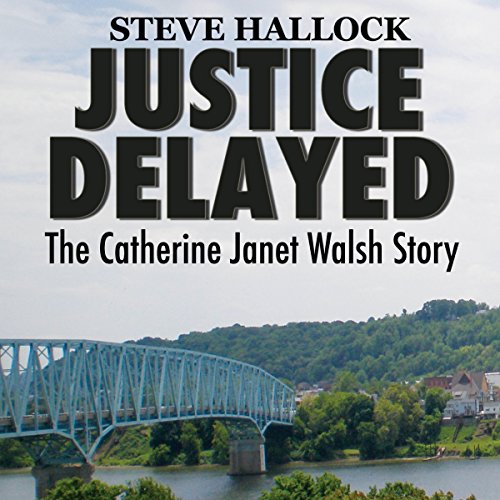 By: Steve Hallock
Narrated by: Kevin Pierce
Try for $0.00

When Ruie Ann Park - a pillar of the Van Buren, Arkansas, community - was found beaten to death and lying in a pool of blood in her home, the police and local residents assumed her son was the murderer. But the years would uncover a more sinister story. Up till that night, the Park family seemed to have it all.

Welcome to the latest box set in the New York Times best-selling series of stories about America's most notorious criminals. For DARKEST WATERS, Wall Street Journal best-selling author Katherine Ramsland is the perfect guide to the famous and not so famous cases that still haunt the states huddled around the Great Lakes. Say hello to Notorious USA!

Evil lurks from the scorched earth of West Texas to the suffocating bayous of Mississippi...where darkness is deadly and screams go unheard. Southern Fried Crime comprises of harrowing crime tales from Texas, Louisiana, and Mississippi, all from the files of the New York Times best-selling Notorious USA series.

By: Ron Franscell, and others

A collection of True Crime cases from M. William Phelps and Gregg Olsen.

By: M. William Phelps, and others

When Ruie Ann Park - a pillar of the Van Buren, Arkansas, community - was found beaten to death and lying in a pool of blood in her home, the police and local residents assumed her son was the murderer. But the years would uncover a more sinister story. Up till that night, the Park family seemed to have it all.

Welcome to the latest box set in the New York Times best-selling series of stories about America's most notorious criminals. For DARKEST WATERS, Wall Street Journal best-selling author Katherine Ramsland is the perfect guide to the famous and not so famous cases that still haunt the states huddled around the Great Lakes. Say hello to Notorious USA!

Evil lurks from the scorched earth of West Texas to the suffocating bayous of Mississippi...where darkness is deadly and screams go unheard. Southern Fried Crime comprises of harrowing crime tales from Texas, Louisiana, and Mississippi, all from the files of the New York Times best-selling Notorious USA series.

By: Ron Franscell, and others

A collection of True Crime cases from M. William Phelps and Gregg Olsen.

By: M. William Phelps, and others 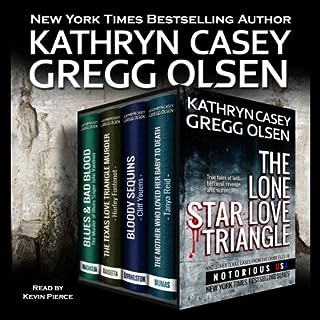 Best-selling authors Gregg Olsen and Kathryn Casey take a new look at some of the Southwest's most heinous crimes, including drag queen Cliff Youens (who went by the name Brandi West on stage), convicted of stabbing his/her girlfriend 39 times; Hurley Fontenot, a junior high school principal accused of killing his rival, the football coach, over the love of a school secretary; and Tanya Reid, the first Munchhausen Syndrome By Proxy mother most Americans ever heard of. 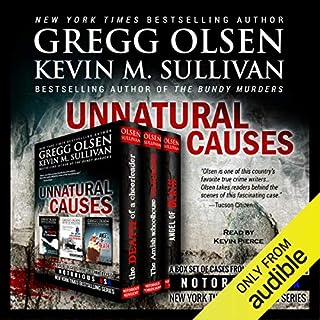 From the dark and bloody ground of Kentucky, to the peaceful Amish communities of Pennsylvania, to the cities and towns crisscrossing Ohio, murder and mayhem has been a part of it all. Within the pages of this latest volume in Notorious USA's New York Times best-selling series you'll discover how the unsuspecting succumbed to the evil that caught them by surprise, and what the authorities had to do to stop the madness. 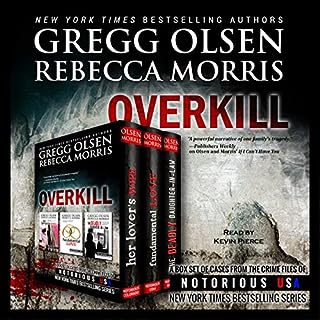 Colorado's edition includes three of the country's most infamous crimes which all occurred in the same area of Colorado: the murder of JonBenet Ramsey, the Columbine school shooting, and the Aurora movie theater massacre. They also report on an Amish serial killer, on a fatal attraction that led to a murder, and on a minister's wife whose illicit passion drove her to murder. 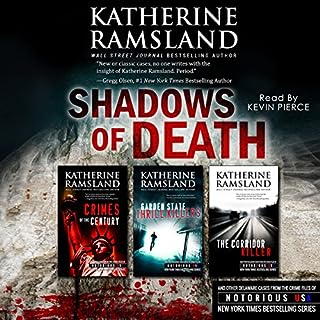 In Shadows of Death, acclaimed author Katherine Ramsland takes listeners on a tour of New Jersey, New York and Delaware. Home of the Jersey Devil, New Jersey has its share of other devils, from predatory nurses to thrill killers and sadists. The Empire State has witnessed many unique and perverse crimes. Quite a few triggered international headlines. The first documented female serial killer in the US came out of the tiny state of Delaware, as did a "signature killer" who attracted FBI profilers. 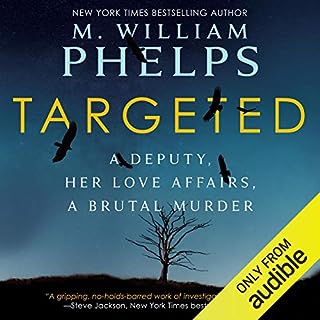 When her missing boyfriend is found murdered, his body encased in cement inside a watering trough and dumped in a cattle field, a local sheriff's deputy is arrested and charged with his murder. But as New York Times best-selling author and investigative journalist M. William Phelps digs in, the truth leads to questions about her guilt. In his first full-length, original true-crime audiobook for WildBlue Press, Phelps delivers a hard-hitting, unique experience, immersing listeners in the life of the first female deputy in Oglethorpe County, Georgia. 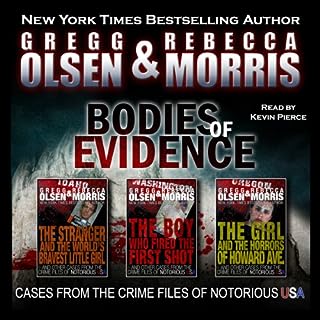 New York Times best-selling author Gregg Olsen ( If Loving You Is Wrong, Starvation Heights) and veteran journalist Rebecca Morris ( Ted and Ann - The Mystery of a Missing Child and Her Neighbor Ted Bundy), authors of the upcoming If I Can’t Have You – Susan Powell, Her Mysterious Disappearance and the Murder of Her Children (St. Martins) take a new look at the Northwest’s most notorious crimes. Many of them made history. 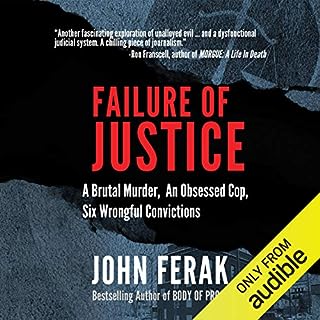 Everyone felt the same way: Small-town Nebraska widow Helen Wilson didn't have an ounce of meanness in her body. Then, on February 5, 1985, one of the coldest nights on record, the unthinkable happened. The 68-year-old resident was murdered inside her second-floor apartment. But why? 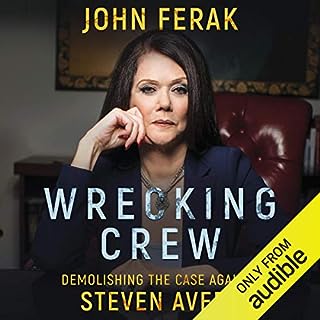 In 2016-17, while working for the USA Today Network’s Wisconsin Investigative Team, author John Ferak wrote dozens of articles examining the murder case again Steven Avery, who had already beat one wrongful conviction only to be charged with the murder of Teresa Halbach in 2005. In Wrecking Crew, Ferak lays out in exacting detail the post-conviction strategy of Kathleen Zellner, the high-profile, high-octane lawyer, to free Avery. 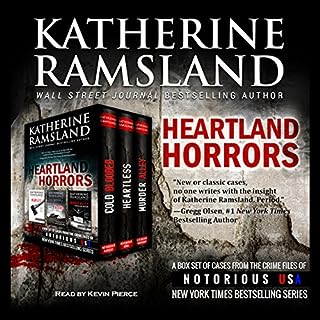 Welcome to Heartland Horrors, the newest box set of the New York Times best-selling series of tales of America’s most notorious criminals and the crimes that shaped the places we call home. In this collection, you’ll have no better guide through the darkest sides of Iowa, Nebraska, and Kansas than Katherine Ramsland, one of America’s most legendary true crime authors and researchers. Dr. Ramsland digs in deep and uncovers things that others before her have simply missed. With each story, she gives listeners a look deep into the heart of darkness. 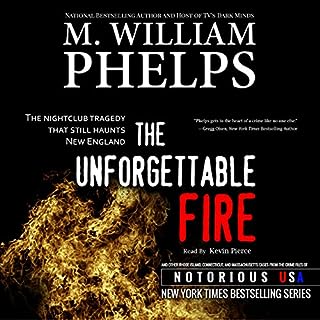 New England is best known for its covered bridges, immaculate town greens, and Revolutionary War history. Yet an evil presence has hidden behind the 17th-century stone walls and clap-boarded homes of CT, Mass., and Rhode Island for centuries. New York Times best-selling author M. William Phelps takes a look at some of the most terrifyingly true stories in New England history. 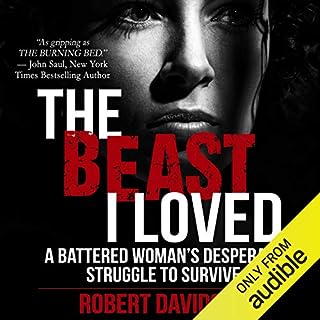 June Briand shot four bullets into her husband's head and was sentenced to 15 years to life. This is the shocking, true story of survival - and the intense bond June shared with her pathologically violent husband, a monster who physically and sexually tortured, degraded, and dominated her so relentlessly she refused to believe he was dead even after she killed him.

The Beast I Loved 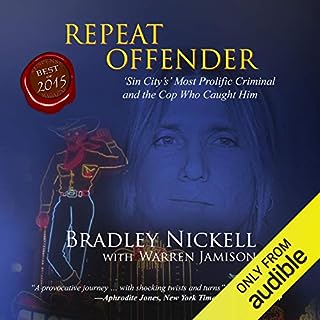 Millions in stolen property, revolting sex crimes, and murder-for-hire were all in the mix for a Las Vegas police detective, as he toiled to take Sin City's most prolific criminal off the streets for good. Detective Bradley Nickell brings you the inside scoop on the investigation, arrest, and conviction of the most prolific repeat offender Las Vegas has ever known.

By: Bradley Nickell, and others

An estranged husband who was a former high school sweetheart.... A suitor spurned after a night of boozing and dancing.... A secret early-morning lover.... These were three of the five viable suspects police were investigating after 23-year-old Catherine Janet Walsh's parents discovered her half-nude body in her bed that Saturday morning of a sultry Labor Day weekend in 1979. But there was not enough evidence to convict any of them.

Thirty-two years later, thanks to the emerging science of DNA forensics, Detective Andrew Gall, who was the initial responding officer to the murder scene, had a prime suspect in this cold case. Sperm left on the stored evidence - a nightgown, a robe tie to bind the young secretary's hands, and a bandana used to strangle her - pointed to one of the five men who had motive and/or opportunity to kill her. But this true saga of liquor- and sex-tinged murder that disrupted a small riverside blue-collar town where crime was rare and everybody was related or friends, was only beginning. Now came the trial - no prosecutorial slam dunk, despite the scientific and forensic evidence - as the story of the murder was told in a courtroom drama involving internationally renowned forensics and DNA experts, conflicting character testimony, questionable alibis, and compromised memories of one long night and early morning of dancing, drinking, partying, and death.

The events of this True Crime book are related carefully, and the reader is guided through this complicated case. In addition, the author provides the background context that make the people interesting, believable and multi-dimensional.

The book is beautifully documented, too, with extensive transcripts from testimony, police interviews and forensic reports. This documentation adds to the interest, and deepens the understanding of what happened over a very long period of time.

However, this book is more than the story of a crime. It presents significant information on the science behind the use of DNA evidence in criminal investigation, and also presents some of the issues surrounding this relatively new forensic tool, including political, ethical and moral issues that are being considered, and the potential effects the use of DNA information could have on criminal investigation and prosecution, both positive and negative.

Although reading some of this material required concentration, which removes this from escape reading, I found this book both interesting and thought provoking, and I was impressed with its meticulous attention to detail.

Kevin Pierce provided his always superb narration. He reads nonfiction in a low key style, but he is never bland, monotone or lacking in expression. He never dramatizes, but doing so would be inappropriate and distracting in this kind of book, and he always finds, and stays in, just the right “key”.

A Bit Too Technical

I feel Janet Walsh's story got somewhat lost in all of the scientific DNA explanations. Thankfully though, DNA allowed the 34 year old cold case to be solved~sadly by the time the perpetrator was convicted, Janet's younger brother was the only survivor of her family.

Audiobook provided for an honest review...

Repetitive but informative about DNA

Only if they had an interest in DNA.

You have to agree with the ending. This book lost my interest early on.

Do you think Justice Delayed: The Catherine Janet Walsh Story needs a follow-up book? Why or why not?

NO! Please one of these was almost one too many.