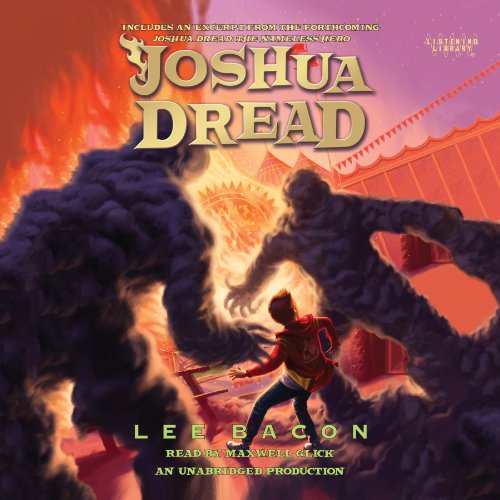 By: Lee Bacon
Narrated by: Maxwell Glick
Try for $0.00

For Joshua Dread, middle school is proving to be, well, awkward. Not only do bullies pick on him, but do you see those supervillains over there trying to flood the world? The ones that everyone, including his best friend, Milton, are rooting for Captain Justice to take down? They're the Dread Duo, and they just happen to be his parents. As if trying to hide his identity wasn't hard enough, Joshua has started leaving a trail of exploding pencils and scorched handprints in his wake, and only Sophie, the new girl in town with a mysterious past, seems unsurprised.

When a violent attack at the Vile Fair makes it clear someone is abducting supervillains, and that his parents may very well be next, Joshua must enlist both Sophie and Milton's help to save them. Well-written, fast-paced, and remarkably funny, Joshua Dread is the first in a series that will appeal far beyond its target audience.

" Joshua Dread is funny, action-packed, and a total page-turner. You'll want to read to the bitter end - unless Joshua's parents destroy the world first. Which is a distinct possibility." (Adam Gidwitz, author of A Tale Dark & Grimm)
"Villainy! Mayhem! Family! From supervillains to killer houseplants, Joshua Dread has it all. I couldn't put it down and I didn't dare, not until I'd devoured every last page!" (C. Alexander London, author of the Accidental Adventure series)

What listeners say about Joshua Dread

Super heroes,villains every thing you want from this book loved it so much

It was good and really fun. It helps you use your imagination. I am 11 years old and love these books Lee Bacon is a awesome writer.