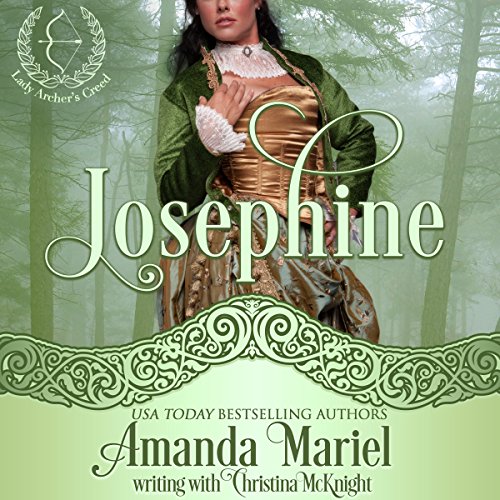 Lady Josephine Watkins never meant to shoot the duke of Constantan. Driven by guilt and determined to see him well, she refuses to leave his side. She could not have guessed the devilish duke would capture her heart.

Devon Mowbray, duke of Constantan, came to Favershame Abbey out of curiosity. He'd only planned to meet the earl known as the beast of Favershame and then be on his way. He never intended on the headstrong beauty sticking him with her arrow and stealing his heart in the process.

Despite the magic burning between them, a dangerous secret leaves Devon no choice but to push Josie away. Unbeknownst to him, she's already unraveled the truth and become more determined than ever to have his heart.

Is their love strong enough to withstand what threatens to keep them apart?

What listeners say about Josephine

Josephine is one of the four Lady Archers who met at Miss Emmeline's School of Education and Decorum for Ladies of Outstanding Quality as a young girl. At a house party for the wedding of her dear friend, Josephine accidentally shoots Devon, the Duke of Constantan. Guilt drives her to nurse him back to health. Devon is happy to be tended by the lovely beauty he had glimpsed the day before, but his own secrets will stop him from pursuing more with Josephine.

This is the first book I've read in this series, and I plan on going back to learn more about the other Archers! This was a quick listen, but very sweet. I loved that Josephine was a strong woman, talented and driven to learn. She may have started out shy, but she definitely went for what she wanted. Devon was a sweetheart. The narration was really well done, and pulled me right into the story. I requested a copy of the audiobook, and I'm voluntarily leaving a review.

This story is absolutely precious. Upon the introduction of the heroine Josephine, I felt like I was one of her friends rooting for her to have a grand love and a happily ever after. Josephine is such a likable character. Oh the hero made me melt. He is powerful, but gentle, kind and sweet. You will fall in love with him.
A good performance by narrator Anne Marie Damman. This is a very well written romantic story with all the right elements to capture your heart. I highly recommend this book.

What a delightful story to listen to! The narrator did a wonderful job!
Lady Josephine shot an arrow meant for a turkey and ended up shooting Duke Devon. She felt so bad she had shot him, so she insisted on doctoring him! The spark was ignited for each of them. He pushed her away because he was afraid that madness was in his blood. His mother was quite mad. A must listen! I loved it!

A very short, quick read for when you only have a few hours of free time. I'm glad for poor little Josie to finally be able to find her HEA! Such likeable characters set amid an unconventional regency era. Easy to recommend for almost any age since its a sweet romance without explicit sex scenes to limit the audience. Its nice to read for the pure romance to calm my nerves sometimes. Also comes in audio book format with a beautiful narration by Anne Marie Damman as well as print and ebook. Enjoy! 😍

Would I listen to it again: yes
Did the story keep me engaged: yes
Was I invested in the characters: yes
What did I like about the story? good pace with entertaining characters
Was there anything that didn't work for me? nope - totally entertained.

Overall comment: light, easy listen. Josephine goes after what she wants and Devon was a sweetie. 😊

A short sweet historical fition romance. Lots of nice twists with what some would consider quirky characters. Now when I find time, I will go back to the beginning of this series.


The narration was well done. The characters were well portrayed.

Josephine (Lady Archer's Creed, Book 4) is the final standalone novel with interconnected characters and wraps up the series ideally. I loved encountering the other lady creed characters again. A cyclonic romance with a secret exposed and a perfect hea. A sweet victorian romance with compelling characters and a entertaining narrative.

Anne Marie Damman naration was fine. However, I would have preferred someone with a british accent rather than an american as this series takes place in England, UK.

Though the book was short it was very nice to listen to the narration was excellent I enjoyed the narrator's voice. The story itself was quite Pleasant and would be a good recommendation for anybody who likes historical romance

This group of ladies Josephine meets when she is sent off to school is fantastic. Best friends now for life. When Josephine is attending a wedding of one of her close friends she meets one of his neighbors and is intrigued by him. Only he leaves without saying goodbye. What choice does a lady have but to follow him. Fun book! The narration is very nice, I did notice a couple of spots it repeats, but it takes nothing away from the story.

The acceptance of Josephine when she joins a new school was amazing with each young lady accepting her just as she is and this seems to last even after they leave and one by one get married.
But, Josephine is still single and one day she is out with her Archer's bow and - well she shot someone.
What happens after that is the making of a rather fascinating romantic story which has a beautiful happy ever after ending.
I loved the main characters, the way her friends support her and the clever, all engrossing story with its very enjoyable narration.
I listened to the audiobook version and my review above is voluntary and unbiased.