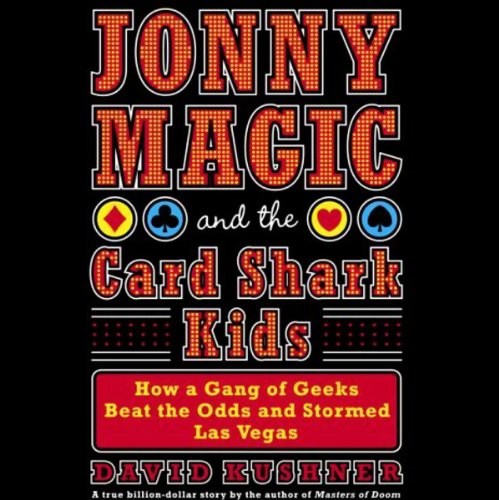 How a Gang of Geeks Beat the Odds and Stormed Las Vegas
By: David Kushner
Narrated by: David Kushner
Length: 7 hrs and 38 mins
Categories: Biographies & Memoirs
4.1 out of 5 stars 4.1 (73 ratings)

If you think a gang of real-life geeks can't take on the world and win big...think again. And whatever you do, don't sit down across a gaming table from Jon Finkel, better known as Jonny Magic. Jonny Magic and the Card Shark Kids is his amazing true story: the jaw-dropping, zero-to-hero chronicle of a fat, friendless boy from New Jersey who found his edge in a game of cards and turned it into a fortune!

The ultimate bully-magnet, Finkel grew up heckled and hazed until destiny came in the form of a trading-card game called Magic: The Gathering. Magic exploded from nerdy obsession to mainstream mania and made the teenage Finkel an ultra-cool world champion.

Once transformed, this young shark stormed poker rooms from the underground clubs of New York City to the high-stakes tables online, until he landed on the largest card-counting blackjack team in the country. Taking Vegas for millions, Finkel's squad of brainy gamers became the biggest players in town. Then they took on the town's biggest game, the World Series of Poker, and walked away with more than $3.5 million!

Thrilling, edgy, and ferociously feel-good, the odyssey of these underdogs-turned-overlords is the stuff of pop-culture legend. Acclaimed author David Kushner masterfully deals out the outrageous details while bringing to life a cast of characters rife with aces, kings, knaves¿and more than a few jokers. If you secretly believe every player has his day, you're right. Here's the proof.

This audio also includes an interview with Jon Finkel, a.k.a. Jonny Magic.

What listeners say about Jonny Magic and the Card Shark Kids

David Kushner evenly writes a short history of a group of guys who turn passion for gaming into a serious vocation. Even if you don't know a thing about poker, you'll enjoy the journey, the disappointments and the wins of this rag-tag gang of gamblers.

Very absorbing tale of a unique character. Jonny is very engaging and many will find something of themselves in him and relate to his story. It gave me some insights into the mind of my own game loving teenage son.

Whether you know anything about the games or not this true story will keep you listening right through to the end nonstop.

Liberal storytelling at it's worst

The book is okay as far as stories like this go. Some of the transitions and resolutions of events could have been better told, but if that is how it happened, then that history is probably the truth. What REALLY ANNOYED me about this book (and why it gets it's 1 star rating) is that Dave Williams was the winner of the $3.5 Million at the WSOP, and John Finkel had NOTHING to do with it.
John and Dave are both Magic: The Gathering players in 2000. That's the similarity and the connection, they didn't play together "for years" and Finkel didn't teach Williams to play Magic. It's like giving Jason Schmidt credit for Barry Bonds hitting 73 Home Runs in 2001, (both players were in the same sport "baseball" and on the same team that year)
I guess I just find it disappointing that this book was so misleading from the outset. I do not recommend it for the same reason I would not recommend only reading 1 side of any history....it's (at best) biased, and at worst, lying.

One of my favorites.