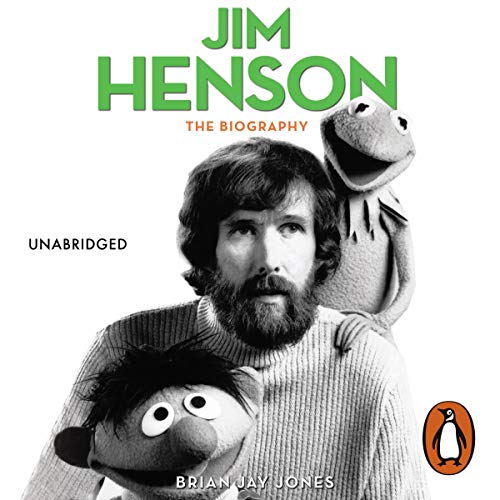 By: Brian Jones
Narrated by: Kirby Heyborne
Try for $0.00

Innovator. Genius. Legend. Jim Henson was a talent like no other. The iconic characters he created - Kermit the Frog, Bert and Ernie, Miss Piggy, Big Bird - made Jim Henson a household name.

But they were just a part of his remarkable story.

Now, in this extraordinary biography, written with the generous cooperation of the Henson family, Jim’s life is given full rein: his vibrant imagination, winning sense of humour, and infectious enthusiasm. For the very first time, the Henson archive has been opened to an independent biographer, giving Brian Jay Jones unprecedented access to private papers. Drawing on this treasure trove of material, as well as exclusive interviews with Henson’s family, friends and closest collaborators, this is quite simply the most comprehensive book ever written about a man who is a hero to millions. Read all about the evolution of the Muppets, Henson’s contributions to Sesame Street and his lengthy campaign to bring The Muppet Show to television, as well as Henson’s non-Muppets projects - the richly imagined worlds of The Dark Crystal and Labyrinth, and fascinating misfires like Henson’s dream of opening an inflatable psychedelic nightclub.

Jim may be gone, but he and his legacy are not forgotten. In Jim Henson, we have the ultimate celebration and examination of an unforgettable, irreplaceable, incomparable man.

What listeners say about Jim Henson

Great audiobook version of the biography of one of the most interesting people in the entertainment industry from the past 100 years. Jim Henson was an innovator who inspired many and most through his creative vision and puppetry.

Huge fan of Jim before reading, well read extremely comprehensive account of his life. If you've got any interest in Jim and his creations its a must.

Such a fascinating and captivating story about the wonderful Jim Henson told in an entertaining way. I found it so inspiring and learnt a lot of things I never knew even though I have been a lifelong fan of Jim and his creations.

A must for any fan of Hensons work

This book is a great listen. I have previously read the book and decided to pick up the audio version for my work travels. It has great historical accuracy and leave nothing unsaid. 5/5 a must read (or listen)

A fantastic, and at times almost uncomfortably candid, window into the life and work of a unique hero of creativity whose many gifts to humanity, keep on giving.

If you could sum up Jim Henson in three words, what would they be?

What was one of the most memorable moments of Jim Henson?

When the Muppets really came to life

What does Kirby Heyborne bring to the story that you wouldn’t experience if you had only read the book?

You felt part of it

Everybody out there just listen to this and smile.

Excellent in every way

This was easy to follow,excellently narrated and gave me a good insight of Jim Henson's life.Just got more of his movies on dvd.I just Loved this!

Reliving my childhood through the eyes of an adult

Having grown up with the muppets, fraggle rock, labyrinth and the dark crystal, I have always had a fond spot for all things Jim Henson orientated. Whilst the first part of the book was a little slow at getting going (detailed family history etc) the whole ezperience was fascinating. Henson's creativity seemed to be boundless and his passion for his art comes across well here without being dull. To hear about all the different projects in detail was intreguing, funny, sad and emotional, which took me back to many happy memories of my own.

The boom is well read by the narrator who adds to the narrative with some very good imoersonations to boot.

Certainly being one of the best non fiction audiobooks I have listened to in a long time, I cannot recommend it highly enough. There was a definate sense of satisfaction after i had finished and I will be listenìng again.

Really great book, well read. Made me see Henson and Muppets in a new light.

Perfect for any Henson fan. Great performance and a deeply informative book that will leave you knowing a little more about the man behind the Muppets.

Insight into the unique and creative mind of Henso

An amazing ride through the life and creative out put of Jim Henson. By the end of it you will more than likely wish there was more minds like Jim who give their talents and optimism unselfishly and effect each of us through their work that still lives on.