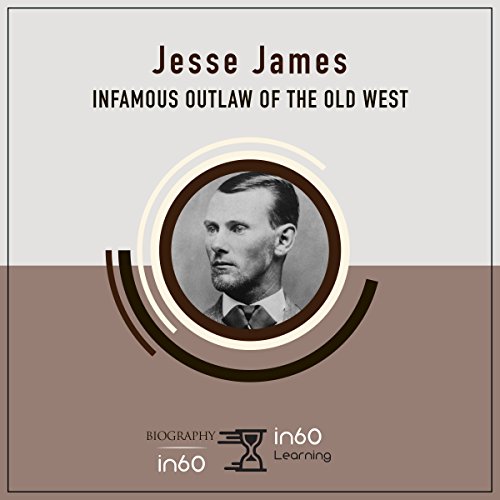 Jesse James grew up in Clay County, Missouri, a place where north and south conflicted over the issue of slavery. Tensions grew in the lead-up to the Civil War, and James’ Southern loyalties meant he had to make a decision. When war broke out, Jesse and his brother Frank joined the Confederate guerrillas known as “bushwhackers” alongside other notorious characters like “Bloody Bill”. By the age of 17, Jesse had escaped death twice and gained a reputation as a ruthless killer. This was just the beginning, though—this short book explains how Jesse went on to live a life of crime that made him one of the most the most infamous outlaws and bank robbers of the Wild West.

What listeners say about Jesse James: Infamous Outlaw of the Old West

Interesting look at the Wild West

In a short span of time The listener is taken to the period when legends were made and Jesse James is certainly amoung the
elite group of notorious criminals of that era.

Its fun to get a peek into that period in the time it takes you to get to work or go shopping.


In 60 Learning has a great future if they keep churning out high quality productions with good performances.

All listeners will benefit from not only this Book but the growing list of Books from In 60 Learning.

I was given this free review copy audiobook at my request and have voluntarily left this review. This review is for the audio copy of Jesse James: Infamous Outlaw of the Old West, by in60Learning and narrated by Larry G. Jones. I really like the in60Learning books. They remind me of the short story history books I read as a kid. This was a very quick listen and it gave me more insight into Jesse James than I had before.

Another hour of history from In60Learning. These short books are a great way to learn just a little bit about an event or a person.

Jesse James has become a Robin Hood-ish character from the Old West, when in fact he was just a common outlaw. This short book touches on the pivotal events in his life and death, giving the listener a glimpse into what might have made him the man he was.

If you are looking for a short history lesson into Jesse James' life, give this one a listen. The narrator does a pretty good job, but his voice was a little robotic at times. I was given an audiobook version of this book by the publisher and chose to review it.

In60Learning did a great job providing listeners with the most important points of Jesse James' biography.

Jesse James and his brother Frank were proud Southerners from Missouri. They joined the Confederate Army during the U.S. Civil War, where they engaged in violent guerrilla warfare against Union soldiers.

After the war, Jesse and Frank and a variety of outlaws robbed banks, stagecoaches, and trains, gaining fame, notoriety and even support, especially in Missouri. The James brothers targeted Northern entities for perceived injustices against Southerners. The James brothers had a major setback in 1876, during an attempted bank robbery in Northfield, Minnesota, where several members of the gang were captured or killed. They continued their crime spree for several more years, while being increasingly pursued by members of the law. In 1882, Jesse James was shot and killed by a new member of the gang, Robert Ford, who killed James to collect a reward.

I didn't care much for the narration on this audiobook.

I, again, am very pleased to review a book by in60Learning. This book tells of the life of Jesse James, all of his life. The main thing I remember learning about Jesse was that he was a notorious bank robber. However, there was much more to his life than that. He didn't start out robbing banks, he beginning was deep seated in the Civil War. He and his brother Frank were part of the Confederate Army and did atrocious things to try to win the war for the South. Hollywood loves to glamorize the James brothers but in reality neither were very nice people. To learn, even in a snapshot, of what all Jesse James did in his life is quite eye opening and should never be romanticized by anyone. in60Learning does a wonderful job, as usual, in giving the main points of Jesse James' life. If you are truly interested in learning about the real Jesse James and not the Hollywood version, then you should check out this book! The narrator did a good job reading the material and did so at a nice pace.

A great bundle of knowledge, collected and balanced perfectly.

The narrator blends in perfectly with the material, and gives a southern atmosphere to the overall listen.

I enjoyed it very much and learned a lot.

I've listened to a few in60Learning titles now, and unfortunately this narrator, Larry G. Jones, seemed. to. read. every. word. as. if. it. were. its. own. sentence, much like William Shatner's vocal rythym of Rodenberry's Star Trek: The Original Series. I'm certain some readers can overlook this narrator's performance, but I could not.

As for the content of this title, it covers the life of Jesse James' notable life events, including his bushwhacking guerrilla in the Civil War; until his sudden and violent death in 1892. I didn't hear any factual errors, but I'll admit to not being an expert on outlaws living in Reconstruction-era America.

**I was provided a promotional copy, at my request, and have voluntarily left a fair and honest review**

Great overview of an interesting figure

in60 Learning is a great way to quickly learn something about a topic which you know very little. 60 minutes is not enough to give you an in depth look, but it's a cheap and quick way to get an overview and determine if you want to pick up that larger tome about the subject. They are well researched, and densely packed for such a small book. And for that alone, in60 learning books will likely always get my tick.

I didn't know much of Jesse James before reading this book, beyond that he was an outlaw gunman. The book goes into good background details, explaining his origins in the US Civil War and giving a good explanation of guerrilla warfare used by James and his ilk. After the war he then goes into crime, due to a few perceived injustices, with his fellow war veterans.

The book openly admits where our knowledge ends and speculation begins, which is always good to see. It doesn't make claims that cannot be known for sure.

The narration by Larry G Jones is good. He sounds somewhat southern cowboy like, which works well with the book text. He is clear, well paced and easy to understand. Jones also says quotes differently, making them easy to seperate from the main text.

I enjoyed this audiobook. It provided a distinct change from the romanticized tales of Jesse James, and provided a god deal of information about how his upbringing and the civil war shaped his life. Good historical summary.

The narration was good, with a smooth and well-paced delivery