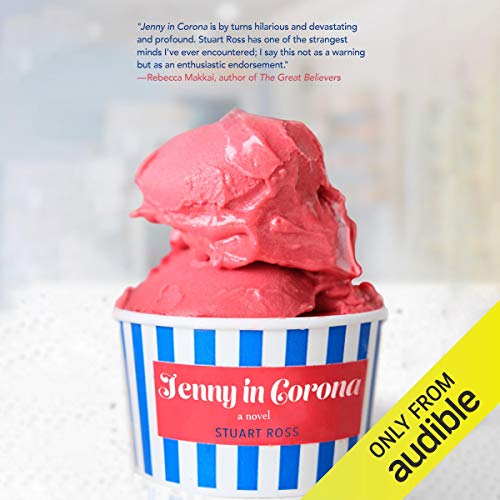 By: Stuart M. Ross
Narrated by: Charlie Thurston
Try for $0.00

Stuart M. Ross’s debut novel, Jenny in Corona, introduces a brilliant new literary voice. Set in Queens and Manhattan in the aughts, the book is narrated by Ty, a half-Jewish, half-Catholic 20-something who works for a business consulting firm on Wall Street. He’s in love with Jenny, a fledgling writer from his Queens neighborhood, but she finds ways to keep her distance. He’s also smitten with his co-worker, Krista Kaplan, but she’s his supervisor and skeptical of Ty because of his relationship with Jenny. His mother has recently died, his father spends most of his time watching movies from the Rocky and Superman franchises, and a senior boss wants Ty to fire his office’s only male African American team member for nebulous reasons.

While the underlying plot elements of this novel are well-charged, the real star of this book is Ty’s voice, which is by turns hilarious, poetically observant, psychologically incisive, and always off-beat. The novel questions our culture from a hundred directions, sometimes with sly allusions or double-jointed ironies, leaving listeners in the exhilarating but uncomfortable position of having to think for ourselves about our collective plight.

"Jenny in Corona is by turns hilarious and devastating and profound. Stuart M. Ross has one of the strangest minds I've ever encountered; I say this not as a warning but as an enthusiastic endorsement." (Rebecca Makkai, author of The Great Believers)

"Stuart Ross is a natural, as very few novelists are: Jenny in Corona comes trippingly off the page, with a lightness of touch and wicked charm to spare. You can't not love his every deluded character - because he loves them so well himself. Alive inside forgotten time or some fugitive place, this is a tender farewell to the wreck of the 20th century." (Miles Klee, author of Ivyland and True False)

"Jenny in Corona is a remarkable New York City novel, a book as funny as it is moving." (David Gutowski, Largehearted Boy)

What listeners say about Jenny in Corona