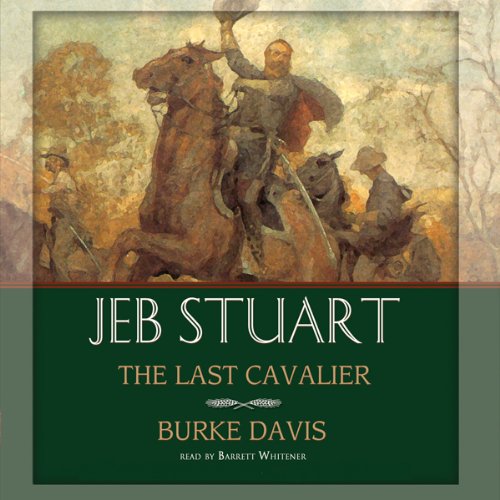 By: Burke Davis
Narrated by: Barrett Whitener
Try for $0.00

Jeb Stuart: The Last Cavalier is a full and definitive biography of the dashing and enigmatic Confederate hero of the Civil War, General J.E.B. Stuart.

This life-sized portrait of Stuart surveys his life from childhood through his training at West Point, his years on the Western frontier, and his decision to stand with Virginia when war arrived. His brilliant Civil War career is covered in detail, from the raid on Chambersburg to his final, fatal clash at Yellow Tavern.

"The rudimentary field communications of the Civil War demanded of the cavalry the utmost in bravery, durability, and vigilance," writes Burke Davis in his introduction to this edition. "Victory or defeat of armies was often in the hands of their cavalrymen."

"The narrative is excellent....This sympathetic and carefully researched work belongs in every Civil War collection." ( Library Journal)
"Barrett Whitener[s] voice generates the narrative and wraps deliciously around each of the players. General Lee speaks with courtly ease and Stuart with boyish energy as the laconic Jackson moves across Virginia." ( AudioFile)

What listeners say about Jeb Stuart

This is one of the more entertaining and interesting books I've listened to on Audible, and I have hundreds. It reads more like a novel than a history book and easily holds your attention throughout. I highly recommend this as a fun and interesting read about a huge Confederate Civil War figure.

Must Read for Civil War Buffs

Brings this unique character to life and presents the conflicting morals and values of the men that waged that war from a refreshing and non-judgemental viewpoint.

This recording must be faulty.

There are dozens of repeats. It is well beyond anything an editor could miss. The narrator and author's great work is tarnished by the contents delivery. Audible owes it to their subscribers to fix this.

I have studied extensively on the Civil War and it's chief players on both sides of the conflict Stewart was a good man and a great soldier and a big loss to the confederacy at that. Epoch c in time.
Daniel Brian Jones author writer public speaker

I am a fan of MG J.E.B. Stuart, I was excited to listen to this biography. I was disappointed in how many times the recording repeated itself, no less than 10 times.

Fine read Jeb was a fine general, he was involved in most civil war battles..

Loved it ,very well done. Story line and narrative was excellent. Think people interested in the Civil War will enjoy this book.

Great read and history of J.E.B Stewart. I've read "Rebel Yell" and "The Last Cavalier" in succession, great follow up and history lesson reading battles from two sides of the Confederate Army. Well written. However, as in many other reviews regarding this book, there are a few spots in the audio repeating itself. Not a big deal, slightly annoying. Overall well worth the credit and then some. I was hoping to get a better perspective on the relationship between J.E.B Stewart and Turner Ashby, the book briefly touched on the subject. Overall great book.

the readers effort to act the story out using so many silly sounding voiced makes for terrible listening. but when he does FEMALE choices it's just too hard to listen.

The story is very generic with very little substance from a strategic perspective or much on the interactions of the senior Confederate leadership (Lee, Jackson, Longstreet) it just sounds like he was wondering the country side doing what ever he wanted to do.

I'll be sending this one back after less then 1/2 the book listened to.

As you listen to the story of Jeb Stuart. You think you are there with him, you can hear the canons, see the armes firing there guns, just great history at it's best.