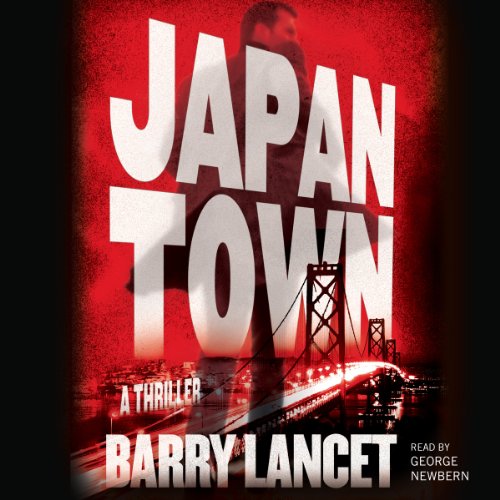 By: Barry Lancet
Narrated by: George Newbern
Try for $0.00

"Best of Debut of the Year" (Suspense Magazine)

Winner of the Barry Award for Best Debut Novel

Optioned for TV by J. J. Abrams and Warner Bros.

In this "sophisticated international thriller" (The New York Times Book Review), an American antiques dealer turned reluctant private eye must use his knowledge of Japanese culture to unravel a major murder in San Francisco - before he and his daughter become targets themselves.

San Francisco antiques dealer Jim Brodie receives a call one night from a friend at the SFPD: An entire family has been senselessly gunned down in the Japantown neighborhood of the bustling city. As an American born and raised in Japan and part-owner of his father's Tokyo private investigation firm, Brodie has advised the local police in the past, but the near-perfect murders in Japantown are like nothing he's ever encountered.

With his array of Asian contacts and fluency in Japanese, Brodie follows leads gathered from a shadow powerbroker, a renegade Japanese detective, and the elusive tycoon at the center of the Japantown murders along a trail that takes him from the crime scene in California to terrorized citizens and informants in Japan. Step by step, he unravels a web of intrigue stretching back centuries and unearths a deadly secret that threatens not only his life but also the lives of his entire circle of family and friends. "Readers will want to see more of the talented Jim Brodie, with his expertise in Japanese culture, history, and martial arts" (Publishers Weekly).

What listeners say about Japantown

Lancet is about to be discovered

I hesitated before buying this book since it is Barry Lancet's first published. This is one of the best first books I've ever read/listened to.

I did a little research and Lancet is an expert on the Japanese culture and on traveling abroad and it really shows in this book. His expertise comes through in this story making it satisfyingly deep and complex and filled with super interesting facts and details that just drive this story. Swept-up is the word I would use. This story and action build up at a speed and level so that I was truly swept up in the story from beginning to end.

The main character, Brodie has great depth. He has characteristics that make you like him and invest in him right away and then more and more unfold as the story goes along. Brodie's background is also developed so that you really believe all the action as that builds as the story goes.

The action is awesome. It's well-paced, easy to follow and picture as it unfolds, and really keeps you on the edge of your seat.

I've never heard the narrator Newbern before, he gets five stars too. He did a really nice job keeping the voices separate and not screwing up the accents and women's voices.

I hope this book and Lancet get discovered.

There were not a lot of surprises in this book, but I did enjoy the story. The author definitely knows Japan and Japanese. Unfortunately, the narrator does not. There were a lot of Japanese locations and phrases used throughout the book, and the constant mispronunciations became a bit annoying. This will only be a sticking point if you happen to be familiar with the sounds of spoken Japanese. Otherwise, I thought the narrator voiced the characters well.

I picked this novel up after I read the first in the series. As much as I liked the second novel I have to admit I liked this on even more. They book has an excellent group of bad guys and the protagonist is so over matched he is in constant danger. This one is more heavy on the action than the second novel, but still with enough detective investigation to make it extremely interesting.

Good Concept - execution could be better.

Everything was wonderful about this story except the near super powers of the Ninjas! Maybe people really are trained to fight like that these days, but it was a little hard to believe.

The insights into Japanese culture and some history are interesting and illuminating, and make the story believable when maybe the ninja stuff goes a little overboard. And the family situation set up for the main character is also believable while still being very unique.

This is a great PI story with extra kicks!

It was a very intriguing and interesting book, the history of the samurai and how they work in the present was a good and compelling idea.

Would you recommend Japantown to your friends? Why or why not?

Was Japantown worth the listening time?

Would you consider the audio edition of Japantown to be better than the print version?

I didn't read the print version. It's unabridged so I assume so.

What does George Newbern bring to the story that you wouldn’t experience if you just read the book?

I hope this becomes a series.

Just couldn't get immersed in this mystery

To me the whole story seemed contrived and unrealistic. I felt as though this was mystery by the numbers. This wasn't my cup of tea but someone else might like it.

Has Japantown turned you off from other books in this genre?

No, I like mysteries but this one just wasn't for me. I did learn things about Japanese culture, which I appreciate.

What aspect of George Newbern’s performance would you have changed?

The narrator has a nice voice but to me came across as flat and uninspired. Competent work though.

What character would you cut from Japantown?

I felt all the characters lacked depth. Rather than cut a character I would like to have seen the main characters developed more fully -- what motivates them at a deep level?

The narrator is terrible!

I often try the sample before I buy, but forgot. Never forget again. This narrator constantly gasps for air, in all the wrong moments and pronunciations of Japanese names and words are just wrong!! Not sure I can get through this book.

I grant a 3.5. I enjoyed the San Francisco and Tokyo setting, having enjoyed both places.

What could improve?
a) condense the supurfalous dialog
b) work on the ending, involve more people - the one man army too much

I'd give the author another shot

This is a great first book by the author. This was a very good storey and kept me in gaged from start to finish with some very good twists and turns. I be leave this is the start to a great series. I look forwards to starting book 2. If you want a easy listen and like some action then this is the book for you.