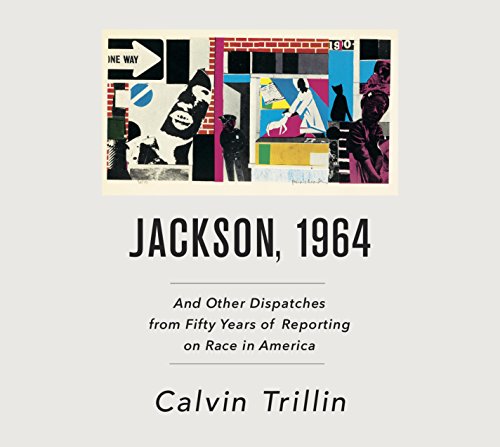 From best-selling author and beloved New Yorker writer Calvin Trillin, a deeply resonant, career-spanning collection of articles on race and racism, from the 1960s to the present.

In the early '60s, Calvin Trillin got his start as a journalist covering the Civil Rights Movement in the South. Over the next five decades of reporting, he often returned to scenes of racial tension. Now, for the first time, the best of Trillin's pieces on race in America have been collected in one volume.

In the title essay of Jackson, 1964, we experience Trillin's riveting coverage of the pathbreaking voter registration drive known as the Mississippi Summer Project - coverage that includes an unforgettable airplane conversation between Martin Luther King, Jr., and a young White man sitting across the aisle. ("I'd like to be loved by everyone", King tells him, "but we can't always wait for love.")

In the years that follow, Trillin rides along with the National Guard units assigned to patrol Black neighborhoods in Wilmington, Delaware; reports on the case of a Black homeowner accused of manslaughter in the death of a White teenager in an overwhelmingly White Long Island suburb; and chronicles the remarkable fortunes of the Zulu Social Aid & Pleasure Club, a Black carnival krewe in New Orleans whose members parade on Mardi Gras in blackface.

He takes on issues that are as relevant today as they were when he wrote about them. Excessive sentencing is examined in a 1970 piece about a Black militant in Houston serving 30 years in prison for giving away one marijuana cigarette. The role of race in the use of deadly force by police is highlighted in a 1975 article about an African American shot by a White policeman in Seattle.

Uniting all these pieces are Trillin's unflinching eye and graceful prose. Jackson, 1964 is an indispensable account of a half-century of race and racism in America, through the lens of a master journalist and writer who was there to bear witness.

Read by Robert Fass, with the introduction read by the author.

“Trillin, a regular contributor to the New Yorker since 1963, collects his insights and musings on race in America in previously published essays from over 50 years of reporting.... What’s shocking is how topical and relatively undated many of these essays seem today.” (Publishers Weekly, starred review)

“That rarity, reportage as art.” (The New York Times)

“If Truman Capote invented the nonfiction novel, as he claimed, and Norman Mailer devised variations on it, Trillin has perfected the nonfiction short story; moreover, his craftsmanship can contend with that of either Capote or Mailer at their best.” (Kirkus Reviews)

"Trillin, a regular contributor to the New Yorker since 1963, collects his insights and musings on race in America in previously published essays from over fifty years of reporting.... What's shocking is how topical and relatively undated many of these essays seem today." (Publishers Weekly)

"The author of some thirty titles, Trillin revisits the last half-century's racial struggles in various regions of the country, and readers are likely to come away thinking, 'so much has not really changed all that much.'... Haunting pieces that show how our window on the past is often a mirror." (Kirkus Reviews)

What listeners say about Jackson, 1964