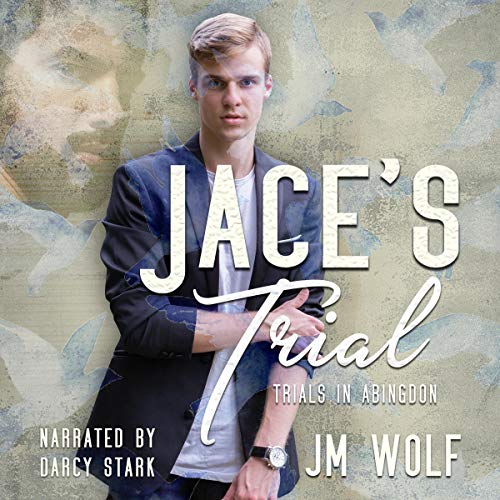 Life is a trial full of obstacles that stand between you and your goals. Do you have the courage to face your own trial?

Jace Garrison was a musical prodigy at Juilliard ready to take the world by storm. Everything he could ever want out of life was unfolding right before his eyes, until everything came crashing down at once. With his muse gone, along with everything he loved, will Jace find the courage to move on?

Former Navy SEAL Gerard Ramhart had always played by his family's rules and traditions. Until he fell in love with Riley Garrison. Unfortunately, before Gerard had the courage to propose to the man he loved, Riley's life was taken away. Gerard was left devastated, with only his memories of Riley and the pain of losing him to keep him going.

One year after Riley's death, Gerard finally makes it to Riley's hometown in Abingdon, Virginia, and meets his son, Jace, for the very first time. Two men grieving over the loss they shared, and during their time of heartache, something blossoms. Can Gerard help Jace find the will to live the life he's meant to have? And can Jace find his muse and accept his feelings for Gerard, despite the fact that Gerard once belonged to his father?

Trigger warning: This book contains content of physical and mental abuse, grieving, and bottled emotions. This is book 1 in the series but can be listened to as a stand-alone story - no cliff-hangers.

What listeners say about Jace's Trial

The story is always full stars, because if I wouldn't like the story as ebook, I wouldn't listen to the audiobook.

The performance from the narrator is also very important for me. I can't listen to a lot, because my English as a non-native-speaker isn't so perfect to follow a whole story over hours, when the narrator speaks too fast or too sloppy. Normally I have to SEE the person, who is talking to me in English. It took me a little bit, to come into the narrator, but at the end, it worked. I only have to take a few breaks between. I'm just not yet finish with the book, but I listen enough to give a review.

3* - it's more then a one-time-listening, but not more then twice a year.
it's like a B

Jace is mourning the loss of his father. He has given up on his music and is just existing. Gerard was in love with Jaces father and has come a year after his death to his memorial where he meets Jace. They are immediately attracted but they have issues to overcome. We are introduced to many folks from Abingdon who we will hopefully learn more about in future books-especially Martins son and Adam. This is a sweet story of overcoming grief and learning to go on.

The narration was good. Story was easy to follow and keep track of characters

Jace’s Trial is not a trial to listen to!

I loved this book when I read it and loved it even more when I listened to it! Darcy Stark’s narration with JM Wolf’s words are a great match! Highly recommend this story!

This book makes me smile!

From the music in this book to the story its self, this book made me happy and I can't wait to listen to Adams Trial!

i loved the book so much. it even had me tearing up at time. Darcy Stark did a wonderful job reading it and the Author did such a wonderful job writing it. cant wait for more.

When I read this book it really took me on an emotional journey, but listening to it just really made it hit home! I laughed, I cried and I cheered them on right from the start. Jace is a beautiful soul whose spirit has been broken by his father's death and past abuse. Gerard is exactly what he needs to help him put his life back together and really soar. Jace and Gerard are sheer perfection together, they really complete each other and are really meant to be. I love the story, I love the characters, and as far as I'm concerned the author is simply brilliant in weaving a perfect story. This is a must read and a must listen!! The narration is spectacular and I really hope that Adam's book will be coming out in audio very soon! I voluntarily reviewed a gifted copy of this audiobook.

I liked the story, it grabbed my attention from the very beginning and I finished the book in 1 day. This is the story of love and loss and grief and new love. Both Jace and Gerard were interesting characters and the chemistry between them was strong from their first encounter. There were few things that did not make sense to me but they were minor and did not distract from the story. Narrator did an amazing job and his performance made this book into perfect listening experience. I don't know if I would have liked this book as much if I read it. I am looking forward to more books in this series.

This is a great story of the meeting of Gerard, who was the late Riley's love, and Riley's family and friends. He was unable to be there for the funeral, so he has come for the one year memorial.

When he arrives, he is welcomed by everyone. He is pleasantly surprised that Riley's family is so welcoming and friendly. However, Riley's sister tells him that she is worried about Jace. And, unfortunately for Gerard, sparks flew the moment he met the young man who is the son of his dead lover.

Jace is a musical prodigy and attended Julliard before dropping out after a short time. A week after his father's passing, he stored away all of his music. His father brought music into his life, but now he can't feel the music anymore. He has yet to grieve his father's death or what happened in college. It takes Gerard's strength and dedication to allow him to reach a point where he can release all of the turmoil he has been avoiding for so long.

This is the first book in this series, but I am already hoping for some characters to get there own stories. Of course, this can be read/listened to as a standalone, as it is not a cliffhanger, and our MCs get their HEA.

I thought the narrator did a great job. His character differentiation is clearly done, his pacing is steady, and his inflections seemed natural.

* I received a free copy of this audiobook at my request and I am leaving my honest review. *

Thid is such an amazing and beautiful story! I loved reading this story but listening to Darcy Stark is just absolutely perfection. He brings Jace and Gerard to life. I just couldn't stop listening. Amazing narration!

An emotional start and wonderful healing!!

An emotional start and wonderful healing!!

A heartbreaking story of a second chance at love in the most unlikely place!

The was my first story by JM Wolf and he has a very compelling and emotionally infused writing style. The musical elements of this story were very well done and a testament to JM's musical passion. The songs featured in this are very raw, real, and powerful. I could feel the emotions bleed off the page and hit home in many instances. I'd say heed the content warnings but if you can, push through as this story is emotionally healing, dynamic and powerful.

Jace and Gerard are both grieving the same person but in different ways. Their unique grief brought them together and while the dynamic is unusual, JM made it seem almost natural. The first part of the book and the descriptions and process of Jace's grief were very real and raw. I found it emotionally hard to listen at times but am so glad I pushed through because the unique love these to character's share is so special and powerful. I love the healing process each character goes through and it is very real, no cutting corners or glossing over the truth of grief. I praise JM's realness and emotions in this story.

I also loved Adam and can't wait to read his story and learn more about him. A powerful and emotional listening with growth, healing, and a second chance at love!

I love the new audiobook cover too!!

Jase is mourning the. death of his father, .............. what a ride this author takes us on, love the dynamics between the two MCs, Darcy Stark definitely owned this his voice swoon. I have read this book, listening to it was a whole new experience. Definitely a must and I will listening to this again, can't give much away because of spoilers but well worth the time to listen to this.