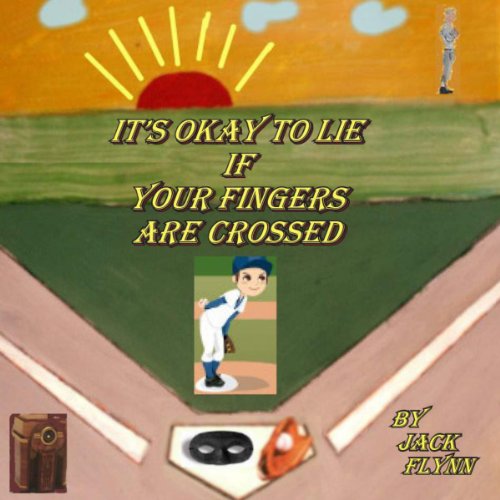 It's Okay to Lie: If Your Fingers Are Crossed

It's Okay to Lie if Your Fingers are Crossed, is based on a ritual kids perpetrated in the forties and fifties, which exempted them from the "liar" label, providing that they crossed their fingers behind them, unbeknownst to the person or persons to whom they were lying.

The hero of the story is eleven year-old Billy Flynn, a schooled and consummate "liar" who lives in a suburb north of Fenway Park. With his ironic sense of humor, his unusual and amusing way of surviving and seeing through the pretensions of the adult world around him, Billy Flynn could very well remind one of an eleven-year-old Holden Caulfield, minus the rich parents and the sympathetic sister. But this boy is a working class kid (third generation Irish-American) who was unlikely to ever see the inside of a prep school.

A reader who appreciates the game of baseball, would especially enjoy this book, because it is baseball as it used to be played by the kids themselves, on an open field without adults hounding their every move. The kids created their own rules, such as 15 fouls and you're out, no one base rule, and when a player hits a fly ball and an outfielder falls into the brook in deep center-field catching it, it is still an out.

This book is not recommended to readers under thirteen, because the language gets raw from time to time and the story deals with sexual issues—not in a prurient sense, but rather in a developmental sense as an eleven-year-old might experience it. The pages are populated by real to life characters and situations, written in a down to earth storytelling style with a humorous and ironic bite to it, and occasionally a surreal feel to it.

As one reader told the author, "Each page contains a precious jewel, waiting to be uncovered."

It's Okay to Lie if Your Fingers are Crossed is recommended for adults, young adults, and especially baby boomer seniors who would find the period (1950) of special interest.

What listeners say about It's Okay to Lie: If Your Fingers Are Crossed

I had already bought and reviewed Jack's paperback version of, It's Okay to Lie: If Your Fingers Are Crossed, and wasn't sure if there would be anything else I could add (5 stars). Wrong! Jack is an obviously very talented and gifted writer but even more so, a story teller. He brought his characters to life and made you feel that you not only personally knew the characters but were there with them. This is a rare combination of talents and I hope that Jack continues sharing his talent.