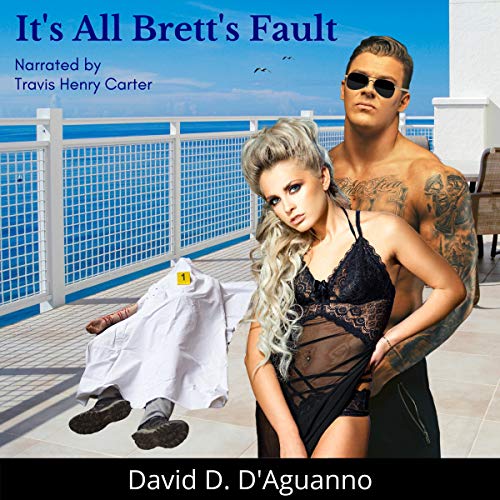 It's All Brett's Fault

Marcus Wade was a man who wasn't easily intimidated - that is, until he had reason to believe someone was trying to kill him.

Upon talking the matter over with his wife Sybil, he decided to hire someone who would not only protect him, but who would also scare off any potential murderers. In other words, he needed a man who was tough, dangerous - and more than a little unscrupulous.

Enter private detective Brett Cornell, who jumps at the chance to push his weight around on the man's behalf, but is even more anxious to get it on with the lovely Sybil Wade, as well as her younger and even more voluptuous sister Nora - for starters!

The fun and games come to an abrupt end, however, when someone really ends up dead, and everyone involved agrees: It's all Brett's fault!

What listeners say about It's All Brett's Fault

In the Trump era we need some fun.

May the Writer of this Series keep churning out the adventures of our favorite dandy randy Private Dick.

As the headlines become more nasty we need the wit and all around fun of the antics of our hero.


He certainly is not in style of the times but that is the point.

The Narrator is so good that he is Brett and deserves the steady income of a Series that hopefully will continue for a long time or at least as long as the Trump era exists.


We need you Brett for more reasons then one.

Satire to break away from daily life

It’s All Brett’s Fault is book 7 in the Brett Cornell Series of Mysteries by very talented author David D. D’Aguanno and is available now in audiobook format, 6 years after it’s initial publication date.

Set in the 80’s, just like all the other novels in this extremely amusing series, It’s All Brett’s Fault follows, once again, private detective and self-proclaimed unscrupulous bastard Brett Cornell who is hired as a bodyguard for a man in fear for his life. Brett thinks that this is his opportunity to make a nice bundle, but when the bodies start to fall, he finds himself in trouble again…

For Audiobooks fans it’s mandatory that a series is brought to life by the same narrator from the first book to the last one and I am really glad to have Travis Henry Carter returning as Brett for this 7th time. He deliver’s Brett’s latest adventure with his trademarked wiseguy accent, while at the same time managing to bring all other characters to the listener’s mind by using different voices and subtle changes in tone and cadence.

It’s All Brett’s Fault is a blast for all those familiar with the characters, but newcomers be warned! Brett Cornell is not your regular Private Investigator. He has no redeeming traits or qualities… Actually, he is a drunk, a cheat, a thief and a liar with his mind only on sex, money and how to get in bed with all the humans of the female persuasion, no matter the costs or the consequences.

Some of you might be offended by the language used in this novel, so I suggest that you listen to the sample before you buy the audiobook. For me is a great satire, just perfect to escape today’s headlines…

If you liked this review, please consider living a Helpful Vote below. You can find more of them here and on theAudiobookBlog.
I post reviews at the author / narrator / publisher’s request. Get in touch with me for more details.
Thank you,
Victor

Really there is nothing that I can add to everything that I already wrote about Brett Cornell Mysteries.
David D. D’Aguanno somehow wrote a perfect series, there is no question about that !!!
And by letting Travis Henry Carter narrate the series a full on masterpiece have been created.
There is absolutely nothing bad that I could write here, only that I can guarantee that it’s impossible not to love the series and that it will always leave you with wanting more !

Absolutely recommend for all !!!

One of my favs!

The usual brilliant Bretticisms and all that, and a great mystery plot. I've been through eight of these so far, and they're all a lot of fun. Brett almost makes a friend in this one, so relatively speaking it's a real tear-jerker. Maybe I'm just crying because now I have to wait for the 9th one to be released. My favorite Adonis this side of the Himalayas. And I don't even know what either of those are--I'll have to check the almanac...

Brett finally has some competition in the unscrupulous bastard category and I love it! Just like in the other Brett books, the private detective uses his humor and unique charm to help solve a mystery. I don't want to give anything away but what I love about these books are that they are really funny but also really good mysteries that makes you think!

Travis Henry Carter is superb as Brett Cornell and I always get a kick out of him! This is one you won't want to miss!

Given the cover and blurb for this book, I had some idea of what to expect. Author David D'Aguanno and narrator Travis Henry Carter deliver ... in spades!

Carter brings the outrageous Brett Cornell to life with an extreme "Jersey shore" accent infused with ego, arrogance and a bit of airheadedness. He nails the character perfectly.

I'm a sucker for snark and wit, so this story totally worked for me. Brett is so authentically chauvinistic and egotistical that you can't help but like him (even if you wouldn't want to claim him as a friend in real life). Despite much of the spotlight being on Brett, there is something of a storyline that keeps the listening experience moving.

Leave your expectations at the bedroom door (they wouldn't fit anyhow because Brett's manhood is THAT big), and just enjoy this over the top PI as he struts his stuff.

This series is too funny! The narration was excellent and kept me entertained. This author does an excellent job with the characters and plot. I look forward to reading more books in this series! I was given this free review copy audiobook at my request and have voluntarily left this review.

3 girls are fighting for Brett's attention in this one, and again he's left on his own in the end. life is not easy for this unscrupulous bastard...

This is nothing like I thought it would be, there is mystery, drama and I laughed so much at times I was in tears. Private detective Brett Cornell--a man who believes he is all that and more--knows how to do his job and does it well. David D. D'Aguanno wrote a tongue-n-cheek novel that will keep you listening to it until the end and Henry Carter did a great job narrating and bringing each character to life. Bravo to you both.

It’s nobody’s fault for loving this

This is my first from the author . This was a fantastic story. It made me laugh , there was mystery and it had you thinking also . The narrator Travis had a clear voice and the character were done perfectly .
This is part 7 of the series.
Hero is Brett Cornell.
Brett is a man with Blod hair and a great body . He wants to retire by 40 but there is one problem Brett is Broke
Brett just found his perfect way o easy street , he needs to provide protection to someone paranoid that someone is out to murder him .. the pay is five thousand dollars for a few weeks
Does Brett find his way to retire with all that money , is someone actually out to murder his client

More than one way to skin a canary.

It's hot outside and Brett is pumping iron. Modest and retiring as always, at 37 he believes he's never looked better, even hotter than the weather. But he's still a long way from his goal of Easy Street by the time he's 40. In fact, he's broke. And still hurting after 'she who cannot be named.'
So when offered a job as protection for a man who claims that someone wants to murder him which pays five thousand dollars for a couple of weeks work, Brett goes along with the pushy Marcus Wade, little knowing that he might just have met another unscrupulous bastard like himself.

The story is, as always, ramblingly related by Brett (and his alter ego, Trains Henry Carter) himself. Not a book for the uptight P.C. crowd. In fact, Brett is not someone yho anyone would ever want to really meet, but experienced th byrough the pages of David D.D'Aguanno's books, he is rampant, if you get my drift. And Travis Carter's narration is superb, becoming the vain, obnoxious moustachioed and muscled monster so seductive to the ladies, whilst at the same time voicing everyone else be they male or female, very distinctively. The combination of author and narrator makes the Brett Cornell stories absolutely unmissable.
Do I recommend it? "Do ducks quack and mooses moo?" Absolutely!

Never have I met a character quite like Brett Cornell, he's arrogant, loud, chauvinistic and in his own words an unscrupulous bastard. Just about every person he meets me manages to piss off in one way or another.

I laughed at all the shenanigans Brett manages to get himself into during this story, from punching Marcus Wade for looking at him wrong while he was working out at a local gym, to calling Nora everything under the sun. This entire character base worked perfectly together in my eyes.

Loved the book and I would highly recommend it to everyone.