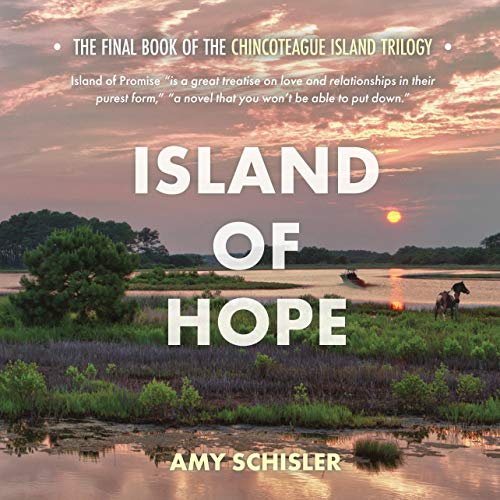 By: Amy Schisler
Narrated by: Abigail Reno
Try for $0.00

Hope is that thing that sees through walls, breaks through barriers, and propels dreams into reality.

Despite numerous struggles and tragedies, the Middleton and Kelly families live humble and faith-filled lives on the Atlantic Ocean resort town of Chincoteague Island, Virginia.

The tight-knit families represent everything Nick Black hopes to have - loving parents, welcoming homes, and stable lives. But a broken heart confirms his belief that he is worthy of everlasting happiness.

Taylor Murray wants nothing more than to be one of the world-famous Chincoteague Island Saltwater Cowboys, but a long-standing tradition stands in her way and pits her against her friends and neighbors.

Brought together by a sudden tragedy, Nick and Taylor must navigate the waters of death, darkness, and despair in order to discover that miracles abound, promises are fleeting, and hope is a necessity for the families on Chincoteague Island.

About the author: Amy Schisler writes inspirational women’s fiction for people of all ages. She has published two children’s books and numerous novels, including the award-winning Picture Me, Whispering Vines, and the Chincoteague Island Trilogy.

A former librarian, Amy enjoys a busy life on the Eastern Shore of Maryland.The recipient of numerous national literary awards, including the Illumination Award, LYRA award, Independent Publisher Book Award, International Digital Award, and The Golden Quill Award, as well as honors from the Catholic Press Association and the Eric Hoffer Book Award, Amy’s writing has been hailed “a verbal masterpiece of art” by author Alexa Jacobs.

Amy’s books are available internationally, wherever books are sold in print, e-book, and audio formats.

What listeners say about Island of Hope

This is the first audio book that I have listened to to the end. I enjoyed this book , felt like I should know the little town now. Very good job by the reader. I don't usually like to be read to since I get more out of book by reading myself. I would listen to more books by this author and reader.