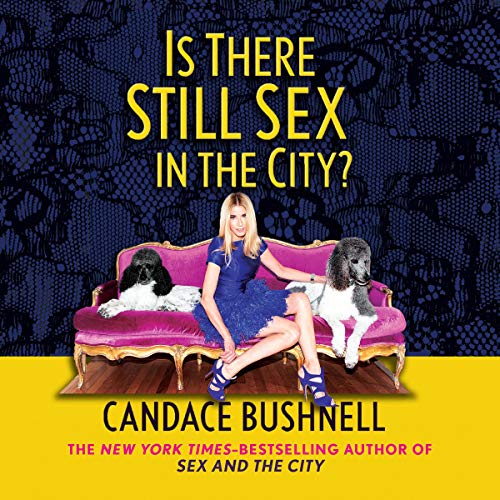 Is There Still Sex in the City?

By: Candace Bushnell
Narrated by: Julia Whelan
Try for $0.00

Set between the Upper East Side of Manhattan and a country enclave known as The Village, Is There Still Sex in the City? gathers Bushnell’s signature short, sharp, satirical commentaries on the love and dating habits of middle-aged men and women as they continue to navigate the ever-modernizing world of relationships. Throughout, Bushnell documents 21st-century dating phenomena, such as the “Unintended Cub Situation” in which a sensible older woman suddenly becomes the love interest of a much younger man, the “Mona Lisa” Treatment - a vaginal restorative surgery often recommended to middle-aged women, and what it’s really like to go on Tinder dates as a 50-something divorcee. Bushnell also updates one of her most celebrated stories from Sex and the City, “The Bicycle Boys”, which is about a breed of New York men who are always trying to bring their bikes up to women’s apartments. Once an anomaly, Bushnell charts their new ubiquity, in addition to where and how to do your own man-stalking via bicycle (and whether or not it’s worth it).

In Is There Still Sex in The City?, Bushnell looks at love and life from all angles - marriage and children, divorce and bereavement, and the very real pressures women face to maintain their youth and have it all. This is a pull-no-punches social commentary and an indispensable companion to one of the most revolutionary dating books of the 20th century.

What listeners say about Is There Still Sex in the City?

This book is reminiscent of season one Sex and the City. Brutally honest about dating over 50. Her best book yet!

This is a frank account of some women’s experience in their fifties. I thought it was an honest and humorous take on a stage of life that isn’t always that funny. She captures the disappointments and hopes of women as they begin to transition from the second act of life to the third act. Sex and the City grows up. Frank and interesting. Ms. Bushnell did a great job of opening up and making herself quite vulnerable to her audience. Her candor is appreciated.

not what I expected but good

I enjoyed but not for everyone. it's a story of women in there 50s, not necessarily about dating

This book surprised me with its wit, compassion and raw honesty about life as a middle aged woman. We need more stories from Bushnell!

I was a little unsure of the book based on the reviews, but decided to give it a try. I’m glad I did. Candace Bushnell’s wit was abound and I really enjoyed the narrator as well. As someone who’s reached middle age it was fun to read things I could relate to. And it mad me not so down on getting older. Great book!

It started a bit slow, but the majority of the book was very good. The ending was great.

Is there’s still Sex in the city it’s a great book to listen to. it’s quick & at times it’s funny.
If you’re a Candice Bushnell fan, you’ll enjoy listening

I had read some mean negative reviews about this book. Instead I really truly enjoyed it. I always enjoyed the TV show sex and the city but have to admit the girls were very spoiled and money oriented. This book instead talks about the financial struggles of starting over in your middle age. It focuses on the friendships the struggles and the journey that these women make together. I liked the humor in the story and it really truly seemed to reflect where I am in my life right now. The reviews mention Kevin and vaginal rejuvenation Excedrin these are told him very biting humor and in no way and Dorset. Instead the focus of the book is on growth and knowing that there is life after you are in your fifties and focusing on yourself and your accomplishments and your friendships and perhaps love.

This book is campy and very Sex in the City!

Life moves on. Some things are good, more are bad. I enjoy revisiting friends even if we are older. Yes, older! Damn it!

A must read for woman in their 50’s looking for love !! It now makes sense!