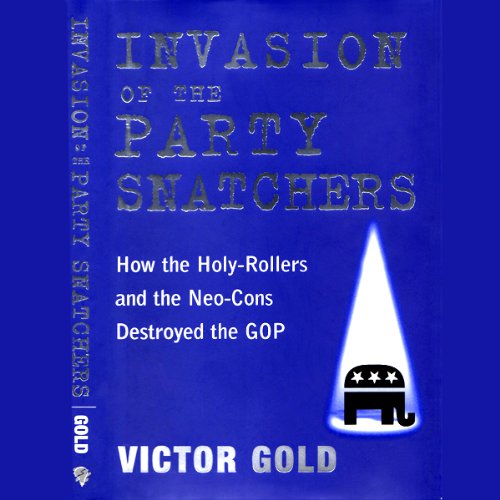 Invasion of the Party Snatchers

By: Victor Gold
Narrated by: Gerald Swafford
Try for $0.00

Victor Gold is dismayed and saddened by what has happened to the GOP he respected and supported. The Republican party he joined in the 60s once believed that religion was a personal matter, that the natural environment should be protected, and that George Washington's warning against "foreign entanglements" should be heeded.

He points to the people he holds responsible for the dissolution of these values with considerable wit and the insight he has gained from his years of service to Barry Goldwater, Richard Nixon, and George H. W. Bush.

"Gold sees a promising future for the Republican Party, but not until they lose some major elections and are able to keep down a slice of humble pie; for those disillusioned with the state of the GOP, this quick, uncompromising polemic provides substantial support, along with a large dose of cold comfort." ( Publishers Weekly)

What listeners say about Invasion of the Party Snatchers

I think all Independent voters will enjoy and relate to this book. A young Republican for Goldwater, who worked for subsequent Republican Presidents, now seems politically homeless. As an Independent myself, I wish the Republican Party would offer a candidate I could honestly consider voting for but all I've been getting lately is either tools or puppets. Alas, I don't think 2012 will change the party.

An understanding only a Republican can have

This book isn't for partisan party-lovers (or haters). Written by a man who clearly knows where he stands, and why he supports (and opposes) the major parties, it gives clear, clean insight into the developments in the Republican Party in the last fifty years. If there was one word to describe this book, it would be 'honest', there's no pretension or spin on behalf of the author; instead he provides a clear understanding of his point of view, and an intelligent analysis of why it's failing.

This book openly criticizes most people in the political spectrum, but keeps the punches above the belt. Listen, understand something you (and the RNC) don't understand.