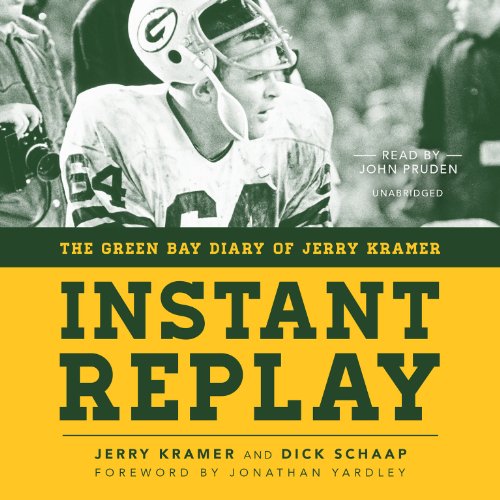 By: Jerry Kramer,Dick Schaap
Narrated by: John Pruden
Try for $0.00

This classic sports book takes listeners inside the 1967 season of the Green Bay Packers, following that storied team from training camp to their dramatic victory in Super Bowl II.

Candid and often amusing, Jerry Kramer describes from a player's perspective a bygone era of sports, filled with blood, grit, and tears. No game better exemplifies this period than the classic "Ice Bowl" conference championship game between the Packers and the Dallas Cowboys, which Kramer, who made the crucial block in the climactic play, describes in thrilling detail. We also get a rare and insightful view of the Packers' legendary leader, coach Vince Lombardi.

As vivid and engaging as it was when it was first published, Instant Replay is an irreplaceable reminder of the glory days of pro football.

What listeners say about Instant Replay

What an amazing book. Combination of Kramer‘s wit and honesty combined with one of the greatest seasons in the history of the NFL make this story one that’s impossible to not love no matter who you root for on Sundays (well unless your Dallas).
The diary format allows an insight to life in the NFL that is impossible in any other way. You get his thoughts and insights, his love for his fellow players, and of course, his love and admiration for his coach, Vince Lombardi.
I cannot recommend this book enough.

Absolutely awesome listen!!!! wow!
you get a real inside feeling of how and what a player goes through

Even the 50th Time was Amazing

I read this book every year after the Super Bowl...it never disappoints! I've read every book I can about Lombardi's Packers and this is the best...in fact, it's the best book about NFL football ever written.
The narrator was excellent, but I wish it was Jerry Kramer's voice telling me his story. Why not? He's still around thankfully still gracing us with football stories in a delightfully engaging manner. was he given the opportunity but not allowed? Anyway, loved listening for the first time while building a cabin...time passed so quickly, just as the 60s Packers continue to slip in the distant past.

As a GBP-for-life fan I thoroughly enjoyed listening to Kramer’s recollection of the last year of the Lombardi legacy. I’m sure a lot of what he describes translates even to present day life in the NFL. Some of the story, however, comes across as quaint rather than incisive. Still, it’s worth a trip down memory lane to re-live a very unique time in Packer history. Voice performance is okay, at times annoying.

A “must read/listen” for Packer fans and football fans alike!! The stories alone of a bygone era of football are worth the read/listen!!

Narrator needs to know how to pronounce Green Bay. Accent is on Bay, not Green. 😉 Other than that - it is a great book. I first read this 45 years ago, and it brought back wonderful memories.

I haven’t read another story like this from a player. It also gives a glimpse into the life of Lombardi. The narration was very good, but could have been better had the narrator been more youthful, like the writer.

best book on the inside world of football

the job Kramer and Schapp do weaving this narrative is amazing. a must for fans