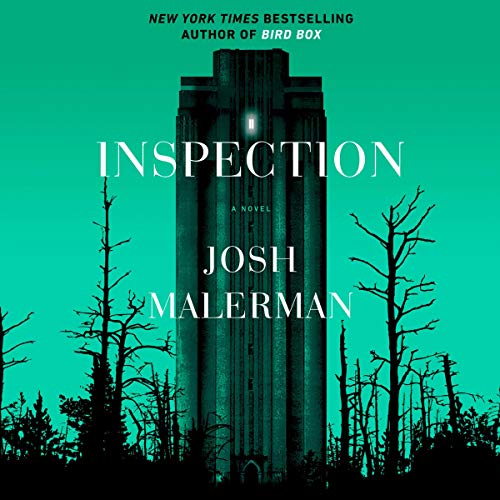 By: Josh Malerman
Narrated by: Michael Crouch,Brittany Pressley
Try for $0.00

Boys are being trained at one school for geniuses, girls at another. Neither knows the other exists - until now. The New York Times best-selling author of Bird Box invites you into a world of secrets and chills in a coming-of-age story like no other.

Nominated for the Bram Stoker Award

"Josh Malerman is a master at unsettling you - and keeping you off-balance until the last page is turned." (Chuck Wendig, New York Times best-selling author of Blackbirds)

J is a student at a school deep in a forest far away from the rest of the world.

J is one of only 26 students, all of whom think of the school’s enigmatic founder as their father. J’s peers are the only family he has ever had. The students are being trained to be prodigies of art, science, and athletics, and their life at the school is all they know - and all they are allowed to know.

But J suspects that there is something out there, beyond the pines, that the founder does not want him to see, and he’s beginning to ask questions. What is the real purpose of this place? Why can the students never leave? And what secrets is their father hiding from them?

Meanwhile, on the other side of the forest, in a school very much like J’s, a girl named K is asking the same questions. J has never seen a girl, and K has never seen a boy. As K and J work to investigate the secrets of their two strange schools, they come to discover something even more mysterious: each other.

“Creepy. . . a novel whose premise is also claustrophobic and unsettling, but more ambitious than that of Bird Box . . . Inspection is rich with dread and builds to a dramatic climax.” (The Washington Post)

“This unlikely cross between 1984 and Lord of the Flies tantalizes.” (Kirkus Reviews)

“Malerman builds a striking world. . . . As he did in Bird Box, Malerman’s crafted an irresistible scenario that’s rich in possibility and thematic fruit. . . . Where [Bird Box] confined us behind a blindfold, Inspection rips it off.” (The A. V. Club)

“Inspection proves that Josh Malerman is a master magician of narrative form. He’s distilled the zeitgeist of our terrible times into this dazzling chameleon of a story, part Grimm’s fairy tale of innocent youth, part dystopian gender politics and authoritarianism run amok, with a satisfying Tarantino-esque ending.” (Alma Katsu, author of The Hunger)

“[Inspection] mashes up gender issues with Frankenstein.... Taking a cue from the godmother of horror, Mary Shelley, Malerman’s latest, Inspection, appreciates that the scary part is not the lurking, growling monster, but instead exploring the real-world ramifications of such a seemingly fantastical proposition.” (The Oakland Press)

“Engaging and suspenseful! Malerman creates a fiendish fairy tale of a world where boy was never meant to meet girl and of the hell unleashed when they finally do.” (J. D. Barker, internationally best-selling author of The Fourth Monkey and Dracul)

What listeners say about Inspection

Written about pre-teens for pre-teens...

Although the premise was intriguing, I knew I'd made a mistake by the third chapter. I felt like I was in the dystopian bargain bin at Barnes and Noble. The plot meanders along with an intense repetition until the ending collapses into a gory, chaotic mess. I had questions at the end but didn't care about the answers.

As beautifully written and unique as Bird Box - if not more

I’d been looking forward to the release of this book for months, and Malerman certainly delivered. Like Bird Box, Inspection’s plot is completely unique. In this modern world of what feels like repetitive superhero movies, unnecessary sequels, and remakes, I’m so thankful for writers like Josh Malerman who are able to craft narratives that are not only beautifully written, but inspire deep introspection through captivating, truly creative characters and situations. While there was one significant possibility that wasn’t addressed (which I won’t mention here, but you will probably ask yourself while listening to the book), this book is nothing short of inspiring. I hope to read and listen to many, many more stories by Josh Malerman.

sudden change in behavior of characters was too unbelievable; felt like I missed key chapters somewhere

Hard to follow and found myself asking what or why too many times. Would not recommend 😞

Will Malerman every get out of Birdbox’s Shadow?

Personally, I went into this book with low expectations. I knew already that Josh Malerman had a mountain to climb in getting out of the shadow that was his epically amazing thriller Birdbox. So when I was disappointed, it was no surprise.

The premise. Amazing.
The setting. Superb.
The characters. Excellent.
The writing. Awesome.

Ultimately, I feel where it fell flat for me is I was more intrigued by the experiment itself! I would have liked a lot more background information on the children’s pasts and the staff. The revolt and the uprising made me angry and I actually found myself rooting for Richard and the Parenthood. All that hard work. All that money. All that time wasted. All the wasted potential of the Alphabet Boys and the Letter Girls. I wanted to see how they would have entered the real world as undistracted adults. How they would have functioned and when they planned on actually introducing the opposite sex to them and revealing the real truth to them. The level of intense violence at the hand of children, as advanced as they might have been, was completely over the top. Is this simply a nurture vs nature and proving that they just raised a group of little psychopaths? An intriguing story for sure, but a potential for so much more!

Being a Wisconsin native myself the nod to Milwaukee made me smile.

This should be a short story.

This book is about 10 hours too long. The first real event happens 6 hours into the book Then the next real event in the story happens 10 hours in the book. the rest of this book is boring inner monologue. If you buy this book just skip to the last 3 hours of the book and save some time.

this book frustrated me to no end

this was not a horror book, nor was it really a thriller/suspense

the narrator was good, that part i had no issues with, it was the story itself. this could have been a better short story, as the fluff needed to make it this long was not worth it.

I like this type of story...kids/people growing up not knowing about the real world. THis was not my favorite but i still liked it. I had to fast forward at times because of blah blah blah and i eventually put the speed on 1.25.

not at all believable. (spoilers)

Why do they need to kill the kids who have seen someone of the opposite sex? why not just let them go? why kill the woman who showed up there? how do they get away with that? how did she even find them. Why do the staff make so much money if they can't leave? What made these scientists put together an experiment where any dissenters need to be killed? Two twelve year olds who have never met the opposite sex before show each other their privates immediately upon meeting and start making out. The two towers are only three miles apart, and the kids are allowed to roam freely. Yet we are to believe the kids wouldn't have stumbled upon the other tower on their own, without that ridiculous scene where getting a glove out of a tree (!! come on!!) gives one girl a glimpse of the boys' tower??? They let ex cons take care of their precious children? Give me a break. I could go on.

There are just so many unbelievable things in this book. I loved bird box and tried hard to love book too. It was very disappointing.

I could barely get through 45 min. Kept waiting for it to get better. Went back to review why I chose it. ?? Maybe a mistake. But a 10 hr mistake. Couldn't do it. Loved birdbox. This was disappointing to say the least.