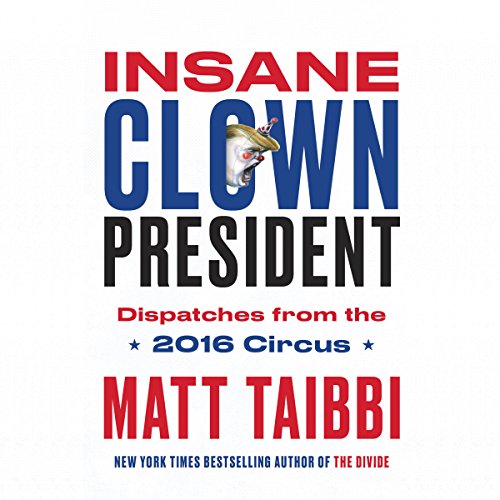 By: Matt Taibbi
Narrated by: Rob Shapiro
Try for $0.00

Dispatches from the 2016 election that provide an eerily prescient take on our democracy's uncertain future, by the country's most perceptive and fearless political journalist.

The 2016 presidential contest as told by Matt Taibbi, from its tragicomic beginnings to its apocalyptic conclusion, is in fact the story of Western civilization's very own train wreck. Years before the clown car of candidates was fully loaded, Taibbi grasped the essential themes of the story: the power of spectacle over substance or even truth; the absence of a shared reality; the nihilistic rebellion of the white working class; the death of the political establishment; and the emergence of a new explicit form of white nationalism that would destroy what was left of the Kingian dream of a successful pluralistic society.

Taibbi captures, with dead-on, real-time analysis, the failures of the right and the left, from the thwarted Bernie Sanders insurgency to the flawed and aimless Hillary Clinton campaign; the rise of the "dangerously bright" alt-right with its wall-loving identity politics and its rapturous view of the racial "holy war" to come; and the giant fail of a flailing, reactive political media that fed a ravenous news cycle not with reporting on political ideology but with undigested propaganda served straight from the campaign bubble. At the center of it all stands Donald J. Trump, leading a historic revolt against his own party, "bloviating and farting his way" through the campaign, "saying outrageous things, acting like Hitler one minute and Andrew Dice Clay the next." For Taibbi, the stunning rise of Trump marks the apotheosis of the new postfactual movement.

Taibbi frames the reporting with original essays that explore the seismic shift in how we perceive our national institutions, the democratic process, and the future of the country. Insane Clown President is not just a postmortem on the collapse and failure of American democracy. It offers the riveting, surreal, unique, and essential experience of seeing the future in hindsight.

Taibbi is the best long form journalist in America. his wit and keen understanding of our corrupted and disgusting political system is seen in this amazing collection of stories from the Trump campaign trail. God help us. Trump is President.

Really 3.5 stars, but rounded up as the audio narration fit very well, with my main issue being Taibbi's no-holds-barred blunt style; at times I would've preferred a bit of tact.

Read "Shattered" first, using this one as a complementary story of how he won after understanding better how she lost. Taibbi's epilogue does go into her loss, as part of an indictment of the Democrats in general, but this book is all about failing to "stop the 'unstoppable'." In a sentence: many voters wanted change, not more of the same establishment insiders (including Cruz) in both the primaries and general election. The book is structured as dispatches from the campaign front along the way, rather than reflective chapters.

Taibbi has no respect for Trump, or any of the Republicans, ever. Biased - check! The thing is that his "hitjob" is backed up in pointing out politicians' hypocrisy. Moreover, his prime target is not the Republicans (or even the Democratic establishment), but the media . . . or what passes for such these days. So, in that respect I recommend the book to all, except partisan Republicans. However, if you think every so often "Man, this guy can be really obnoxious!", it's not you!

I found this book to be relatively interesting and definitely worth the read if you were in a medically induced coma in 2016.
The book explains how president Donald Trump won the presidential election but does not really shed any new light, I was expecting a lot more behind the scenes stories, but nothing. More of an opinion piece. Not withstanding a decent book.

Enjoyed The Prose and Performance

The combination of Matt Taibbi honest analysis of politics and Rob Shapiro's voice was perfect!

We missed the obvious

Mr. Taibbi points out what we all should have noticed from the beginning; there ain't no middle America any longer. And because of that, people are mad as hell. Unfortunately, Donnie won't be able to deliver.

...how we got to this point, both from the Republican and Democrat point of view.

I shudder to think of the hours of bs he had to endure to put this together. Great story (sad!), great writing. Good luck America!

excellent narrative of the hell we are moving into

If it wasn't so sad it would be laughable. Excellent narrative on how we got to where we are now

I thought this was an amazing look at this debacle of an election. It truly was a clown show. Matt Taibbi is a great writer and shows all the angles of why Trump won, the largest parts were the failure of the media and the DNC aka TEAM CLINTON. Trump does understand the unintelligible angry masses and knows how to appeal to them, much as Bernie did to the younger progressive audiences that are a little more well read. All in All many mistakes were made and that is why, we are where we are.

I would have given 5 stars, but this title is awful! As much as I believe it to be true, the Trump supporters and Alt-Right which most can read will not pick this up. Under the Big Top of the 2016 Circus may have been better. Truly a Swell book besides that!

Taibbi has a gift for diagnosing core problems. His writing is both enlightening and funny. He is a very rare and talented individual.