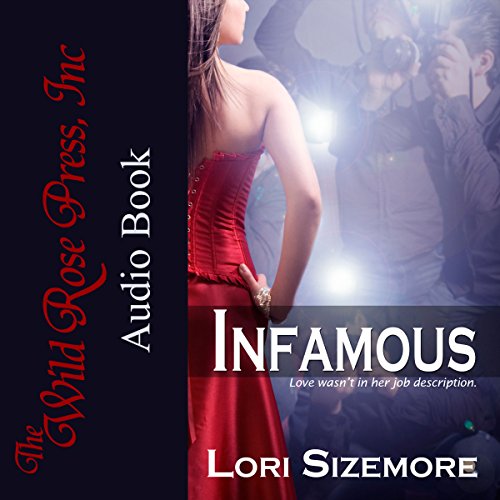 By: Lori Sizemore
Narrated by: Dave James
Try for $0.00

Justine Montgomery, daughter of a divorced beauty queen and TV magnate, is a tabloid disaster after her infamous sex tape. She's so desperate to help save her family's home she turns to her deal-making dad. Can she prove to him she's cut out for a career in television or will she lose it all?

Sawyer has his own past and a successful career is his only goal. Seeing Justine fail would mean the promotion of a lifetime, but things get complicated when he develops feelings for her. Suddenly, the lines between work, life, sex, and love are blurry.

They will have to overcome the bitterness of a rejected ex, the controlling actions of her father, and the half-truths they're telling one another to forge a lasting partnership both on the job and off the clock.

What listeners say about Infamous

This sounded like a book I would love and maybe my expectations were too high but I didn't enjoy this one as much as I was hoping too. There was too much repetition to keep me interested in this one and I struggled to finish.

Great story and characters with an excellent narrator. I received a free review copy of this audiobook at my request and I have voluntarily left this review.

Okay Where is the real story

This book was so trite that I almost didn't finish it. Imagination is a great thing and should be utilized constantly especially when writing a story. Lines can be repeated once or twice but there has to be another way to say the same thing. "I was given this free review copy audiobook at my request, via Audiobook Boom, and have voluntarily left this review."

This was a good read. Justine is dealing with a mother that's in debt, a controlling father, a psychopath ex, a guy who is afraid to admit his feelings for her, and an alcoholic has been actress. The audiobook kept repeating lines all though out the book. It was a little annoying.

This audiobook was provided to me by the author, narrator, or publisher at no cost in exchanged for an unbiased review courtesy of Audiobook Blast.

I really wanted to like this book. Truly, I did.

First of all, there were production problems. Lines were repeated. Once, an entire paragraph was repeated. This is really poor editing production. I realize these are big projects, but more care should have been taken. It happened at least six times – after that, I stopped counting.

The narrator, David James, had an appropriate voice for the book. He was good with the female characters, made an effort at differentiation, and pronounced words correctly.

He really needs to work on his narration skills. Even if he were simply reading the book aloud, there need to be pauses. I’m not talking dramatic pauses. I’m saying I should be able to, for example, tell when the point-of-view changes. Usually, in novels, there is a double space. In James’ narration, there is no discernable double space. He just ploughs on and it was up to me to realize I was in a different character’s head. Also, if two characters were arguing and there were no dialogue tags, (he said, she exclaimed), it was impossible for me to keep up. Without any pause, I couldn’t tell when one character had finished speaking and the next one had begun. I get that the level of excitability should be ratchetted up if there’s an argument, but I couldn’t tell who was saying what. All the enthusiasm in the world doesn’t help.

So now I get to the story. The synopsis makes it seem simple: Justine needs to succeed, Sawyer gets a promotion if she fails. This concept is of no help in the execution. I never truly grasped what was going on. Who was helping who. What sabotage was going on, etc. And to be brutally honest, there were times when I didn’t care.

I did feel empathy for Justine. Dysfunctional, divorced parents, a sex tape, a jealous ex…but I found it hard at times to rally behind her.

I know Sawyer was supposed to have a life-changing moment but he was such an insensitive hound dog that the transformation stretched believability.

Sex without a condom.

Oh, they have a nice discussion after the fact to assure readers it was okay for them to get carried away, but given Sawyer’s history alone (he has sex with someone else earlier in the book) this was highly questionable.

Also, when Justine is drop-dead drunk, Sawyer cops a feel because she ‘won’t remember in the morning’. Yes, the book was written before the #MeToo movement, but it was written in 2016 and is not supposed to be a bodice-ripper from the 1990s. When was it ever okay to grope a drunk woman? What if that was your daughter? Someone does that to my younger sister? Let’s just say, cops would be involved.

Okay (taking a deep breath). There ARE good things about this book. I like that it was a journey of self-discovery for Justine. She went from a tabloid favourite with a sex tape, forced to sell her clothes on the Internet to survive, to a woman who is able to succeed in the (still) male-dominated world of television production. Times are changing, but the world Justine faced was full of men who wanted her to fail.

I liked that the villain was exposed spectacularly, but I did NOT like the level of violence Sawyer consistently used. Protecting a woman who is in physical danger at that moment is one thing. Cold-cocking a jerk? Yeah, not so much. Also, Sawyer calls Justine ‘Princess’ while her father – in the workplace – calls her ‘Baby’.

Again, the constant infantilization of Justine is annoying. Of course, that makes her success all the more sweet, because, aside from Leo, there is not a single man in Justine’s life who believes she can succeed (at least at the beginning).

I did like the character arc for Justine’s mother. Her success rivaled Justine’s transformation in making me happy.

I liked that Sawyer was finally opening up to Justine. His backstory was emotionally engaging, but never was never fully realized.

There were a lot of metaphors – elephants (which I understood), red dahlias (which left me clueless), and a bunch of others. I think they were important, but I just couldn’t follow.

Also, if you know what a ‘clothespin girl’ is, you’re more tuned in to what I assume is popular culture than I am.

And maybe that’s the problem. I just never connected with the book. And I have read thousands of romances across many different subgenres.

That doesn’t mean other readers won’t connect and enjoy it. Those things I nitpicked? Many listeners won’t care. If readers enjoy romantic comedies with lots of twists and turns, this may be the book for them. Hero and heroine who push/pull continuously? Some readers love that.

So if this book sounds interesting, don’t let my review discourage you. I just wanted you to be warned and this is just ONE woman’s opinion.

And maybe you’ll understand and enjoy the Secret Conversion Therapy.