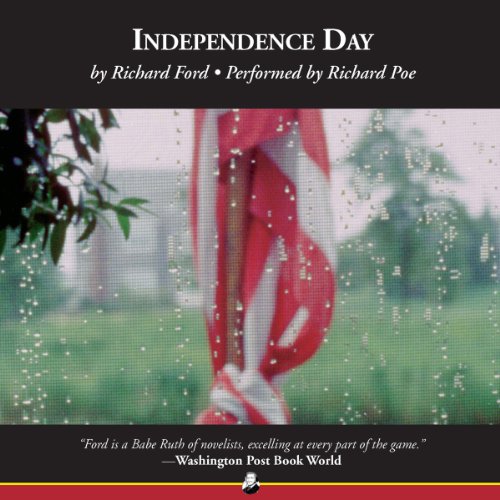 By: Richard Ford
Narrated by: Richard Poe
Try for $0.00

Hailed as a major American novel, Independence Day is a relentlessly thoughtful, heart-wrenching, yet hilarious portrait of an ordinary American man. Wickedly realistic details and dialog entice you to see modern life filtered through the first-person narrator's complex and evolving consciousness. Apparently directionless since his divorce, Frank Bascombe migrates from one non-committal relationship to another. He freely indulges his tendencies to self absorption, over-intellectualization, and neurotic ambivalence. But all of that changes one fateful Fourth of July weekend, when, armed with the Declaration of Independence, he embarks on a mission to save his troubled teenaged son.

What listeners say about Independence Day

Another great book from Richard Ford. Every one in the Frank Bascombe series is excellent. I don't understand how every review is not 4-5 stars. If I'm not mistaken it won the Pulitzer Prize and the PEN-Faulkner Award. Richard Poe's narration is excellent too.

This is the kind of reading voice that makes audiobooks a uniquely pleasurable and enriching art form. A great piece of writing enhanced by an exceptional reader.

oh my god, the most boring book ever. a waste of time, should have returned it.

Read this book if you want to understand how middle-aged, introspective, divorced men find beauty and the will to go on despite the common man's worty and mundane existence. Do not read this book if you're not willing to tolerate the narrative passing through as many hours as the recording is long (or nearly). I loved every minute of it. The voice and language are works of true artistry and the narrator is incredible.

Enjoyable and thought provoking but too long

After reading "Canada" I downloaded this book. This was very different in style. I did enjoy it but found it repetitive and overly long.

A great book. I’ve read it twice and now listened to it twice. Richard Ford is an astoundingly gifted writer and Frank Bascombe is a terrifically depicted character.

An Exemplar on a Surprising Ethnic Type of Novel

I’ve nursed a theory for some time that it should be possible to define a category of ethnic literature around the WASP experience. We’ve done a lot to theorize African-American or Jewish-American literature, and we have given a lot of critical attention to the Fitzgerald-John O’Hara-Updike-Carver school of authors, but I don’t think we’ve thought of them as an ethnic group. They’ve been the “American” school against which other, accented figures get contrasted.

In any case, I start my theorizing with an observation out of Fitzgerald’s short story “Babylon Revisited,” but it could be in any number of places in Fitzgerald: the idea is that much of what concerns him is ‘dissipation,’ the phenomenon of a gifted character making something into nothing. O’Hara certainly picks up on that notion in Appointment in Samarra, and the same notion is at the heart of the Rabbit novels; Rabbit Angstrom starts with something, a social place and the implicit promise of success, but he keeps fumbling it away. Along the way, such authors allow that experience to become entwined with the experience of America itself, to have them embody an idea of American decline, or at least – going back to Gatsby – the decline of a certain kind of middle-class, white and Protestant America. (Quick footnote: I know that Fitzgerald and O’Hara were not WASPs themselves, but they both so aspired to the status that they wrote, literally, the book on how to do it.)

I say all of that because, if I ever decide to prove that point, I can’t think of a better novel to focus on than this one. It’s excellently written, but I feel like uttering an “of course” when I say that. Ford is a master stylist, and – though I don’t hear it as much as I guess I’d expect to – Frank Bascomb is the clear heir to Rabbit. I admire Updike as an understated stylist (and also, in his Bech books, as an over-the-top stylist) and I think Ford can stand right next to him. If writers were law firms where talented senior partners brought in talented junior partners in their same mold, I can see doing business with Updike and Ford, and I intend it as a compliment to both.

Instead, what I take from this novel is less its acute exploration of mid-life self-recrimination and more the degree to which it asserts one man’s experience of life’s challenges as metonymy for a larger national reimagining. Take away the deep literary skill in play – which is, of course, the reason to read the novel in the first place – and this is all about a man who realizes he faces a reckoning as a father and as a numbed soul as ‘independence day” approaches. He takes his son on a road trip to the various sports halls of fame, to places against which all of us fall short, and he insists his son read Emerson along the way. It’s a mini-crisis, or an extension of the greater crisis, that young Paul can’t seem to find any use for Emerson except – right before the accident that resets the parameters of Frank’s life – to tear the pages out of the book. And it’s partial evidence of Frank’s moving past his “existence period” that he can begin to imagine Paul reading Emerson more carefully, that he can imagine Paul coming into his American birthright.

Once you look for such evidence, it’s plentiful and generally unsubtle. Even the epilogue portion of the novel deals with the ebbing of Thomas Jefferson and John Adams’s influence, on Frank’s casual insistence that he not only hasn’t forgotten them but that he thinks of them with a kind of intensity that surprises the neighbor-friend who brings the subject up himself.

All in all, Frank is ineffectively seeking his personal independence against the backdrop of the country’s uncertain stagger in that direction as well. The novel takes place in the months before the Dukakis/George H. Bush election which, though that feels like an achingly innocent political choice, looks to Frank like a choice between a liberal figure who’s mostly surface against a generally selfish and unreflective conservatism. (Again, that makes the book feel downright naïve next to what we see in the current administration.) Frank retains his strength and his ideals, but he has little he can apply that strength to and he has almost no sense of how to pursue those ideals.

I can see a case where someone might say that we’ve heard enough from privileged white men who can’t figure out what to do with the good fortune of their birthright. To that I’d say, first, there should always be room for voices of this excellence. The context of this one has changed enough that, where it might have been a contender for great American novel status 20 years ago, I think it’s probably worth downgrading it to really-good-American novel today. But still, this is a novel as excellent as what Updike was doing, and that’s a rare enough fruit that have to care about it if we’re going to care about literature at all.

I’d say as well, though, and this takes me back to where I began, that Ford isn’t insisting that we see his story as the only American story. Everyone who attempts what my old professor Julia Stern taught me to call auto-American-biography has license to put him or herself forward as representatively American. As readers, we need to see not just the soloist but the entire choir that emerges. If we set this work alongside the other excellent work of its era – alongside the best of Philip Roth or Toni Morrison – we can begin to see it in a light that continues to do it justice. There’s white privilege at the heart of this, and there’s a thoughtful sense of diminishment (or dissipation) that, in the unthinking hands of Trumpdom is appalling. But at bottom, this is a story of someone who wants the greatness that this country promised. If we grant him the standing to represent a larger group around him, if we allow him to stand as “ethnic” in the sense of representing a particular group experience in the coming together of America, then I think his voice has a clearer place.

I loved the ability to capture a common man and bring him through his typical American life in such an articulate and emotional manner. I would never dream of spending pages on seemingly endless monotonous activity with such a riveting style. I had trouble taking breaks from the flow of the narrative and narrator. Superb.

Painfully pointless. The protaganist hates everything. everyone. No one is happy or kind or smart or worthwhile. If you are contemplating suicide, don't read this. I thought this was supposed to be funny. Maybe if you're a masochist!

the author is a master of character development and insights into human nature. highly recommended