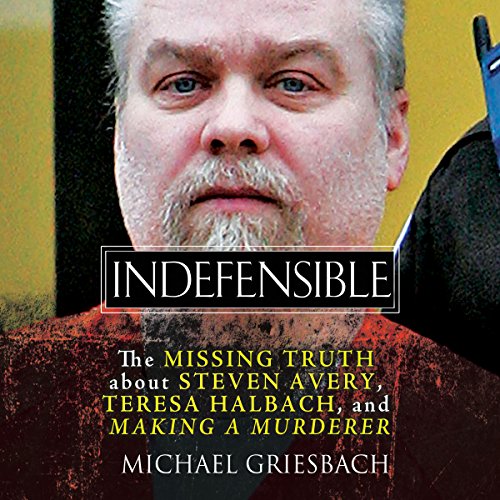 By: Michael Griesbach
Narrated by: James Foster
Try for $0.00

An insider exposes the shocking facts deliberately left out of the hit Netflix series Making a Murderer - and argues persuasively that Steven Avery was rightfully convicted in the 2005 killing of Teresa Halbach.

After serving eighteen years for a crime he didn't commit, Steven Avery was freed - and filed a thirty-six-million-dollar lawsuit against Manitowoc County, Wisconsin. But before the suit could be settled, Avery was arrested again - this time for the brutal murder of Teresa Halbach - and, through the office of a special prosecutor, convicted once more.

When the saga exploded onto the public consciousness with the airing of Making a Murderer, Michael Griesbach, a prosecutor and member of Wisconsin's Innocence Project who had been instrumental in Avery's 2003 exoneration, was targeted on social media, threatened - and plagued by doubt. Now, in this suspenseful, thorough narrative, he recounts his own re-examination of the evidence in light of the whirlwind of controversy stirred up by the blockbuster true-crime series.

Now as Avery's defense counsel files an appeal and prepares to do battle in the courtroom once more, Griesbach fights to set the record straight, determined that evidence should be followed where it leads and justice should be served - for as surely as our legal system should not send an innocent man to prison, neither should it let a guilty man walk free.

What listeners say about Indefensible

A detailed account of this case that is worth your time. Highly recommend this book.

It appears Griesbach provided an analysis of the Avery case that was as unbiased as possible. For viewers of the Netflix documentary, regardless of your current opinion about Avery's guilt or innocence, I think you should listen to this book with an open mind and see where you stand at the end.

I rarely rate books but this needed a rating.

This book is a perfect pairing for those who have watched the Netflix series Making a Murderer and felt the outrage. I know why it stirred up so many feelings of frustration about what appeared to be unjust action taken towards Steven Avery. While watching all I could think was that could be anyone, that could be me, so easily having freedom and your voice stripped away in fear of saying the wrong thing. However I find myself to be someone who needs truth and all sides of the story. Micheal Griesbach satisfied any lingering questions I had after watching the series and is a great author to boot. Perfect choice of narrator also.

Like the others who have posted a review, I found the book very interesting. I freely admit that the documentarians who made "Making a Murderer" could have easily slanted the story into their perspective - hell, Michael Moore has made a career of one-sided "documentaries."

But neither the book nor the documentary answered my questions: Avery had just spent 18 years behind bars for a crime he didn't commit...so when he is freed he immediately kills a woman ensuring his return to a life behind bars?

Dassey said Halbach was tied on Avery's bed, and that Avery stabbed her in the stomach, Dassey cut her throat, yet no trace evidence was found in his bedroom? That only happens in Dexter's world,

If you are so stupid as to commit a crime that would ensure your return to prison, why would you leave the victim's car in your junk yard, especially when you have a car crusher?

The explanation of how the RAV-4 key was found seems too convenient by half. And I've yet to meet a woman who has only one key on her key ring. No house key? No mailbox key? No key to her office? The single key struck me as more likely her spare than her primary.

Dassey's "confession" seemed to be at a minimum borderline unethical. It seemed eerily similar to Peter Reilly, a minor accused of killing his mother in Canaan (CT) years ago.

Had I been on the jury, I do not think I would have found the sheriff's testimony compelling.

I certainly hope, for the sake of Avery and Dassey, that their convictions were correct...but I remain slightly skeptical.

This is the same old propaganda that Manitowoc has been pushing. “We are all dumb, we fell for a bias Docuseries.” Even though most people have researched on their own. His perception of some incidents are inaccurate and not what was displayed in MAM or court documents. The whole book is basically a recap of MAM. You can clearly tell this guy hasn’t passed the bar, just like the other prosecutors in WI. 👎🏻👎🏻👎🏻👎🏻

This book is well written and also well read by the narrator. Definitely adds some insight to what making a murderer left out. It provides some unbiased facts and clears up some I answered questions.

Let me preface this review by stating I'm a civil rights defense attorney, meaning I represent police officers and prosecutors when they are named in civil action lawsuits similar to the one Stephen Avery settled against Manitowac County. Stated otherwise, I am about as pro cop as they come.

That being said, this book is a joke. The author, who is undoubtedly too close to the parties involved in this case to see things objectively, had his mind made up about Avery's guilt long before he sat down to right this book. He then construed the facts and evidence in order to fit his preconceived notion that Avery and Dassey were guilty beyond a reasonable doubt. Because the author failed to discuss the circumstances surrounding Dassey's "meeting" with the special prosecutor and his defense attorney's misconduct, which I consider to be criminal in nature, this book isn't worth the pages it's written on. Don't waste your money.

Grateful for added insight. I loved Making A Murder and was one who "binge watched" it with my wife. After watching the full series when he just watched that Steven went to jail... I knew he did it. It was GREAT entertainment! It was not convincing enough to belief, as you reference in your book, that essentially the whole police force would have to be in on it. One or two bad cops I believe, but people are talkers and their messy and the truth would eventually come like it did with Avery's first conviction. We know what the Sheriff and DA did because you can't hide things forever. Loved the book.

As unbiased as I've heard!

Michael did a fantastic job with objectivity throughout the narrative. Takes you through the evidence for both sides, and even highlights some potential alternate suspects. After the bias of making a murderer, this is very refreshing. We all know there are 3 sides to every story: the prosecution, the defense, and the truth. I believe this helps uncover the truth.

Honestly, this is the info that we need. the documentary really didn't give us all of the facts. it presented a terrifying story of a guy who was wrongly convicted twice of some pretty terrible things... we didn't get all of the facts. just by watching the first season of Making a Murderer on Netflix I was convinced that Steven was innocent, who wouldn't? I know that there's more to the story than just what's in this book, but I also know that this work is an important piece that anyone who's interested in the case needs to absorb. if you're interested in the facts then try this book, it's worth your time and your money.