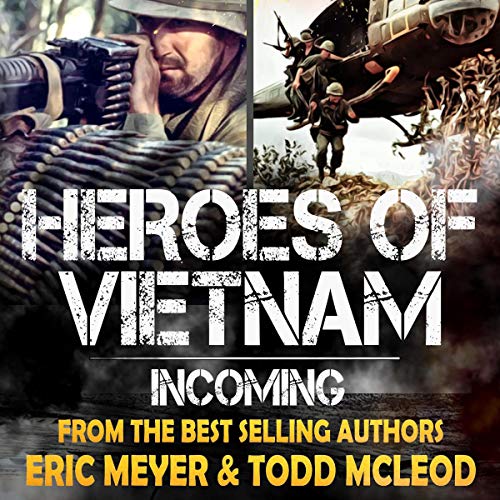 By: Todd McLeod,Eric Meyer
Narrated by: Heath Douglass
Try for $0.00

Joe Walker’s call-up papers arrive on the doormat, and within weeks, he finds himself shipped overseas to South Vietnam.

It is 1965, and America is putting more boots on the ground to fight the communists who have sent their powerful People’s Army of Vietnam, the PAVN, south. Their aim is to defeat the South Vietnamese Army, the ARVN, and impose the iron fist of communist rule on the democratic South.

Walker knows nothing of politics or military strategy and tactics. A single obsession rules his life: to become a major league baseball pitcher. His unit is Air Cavalry, and a Huey lands them at LZ X-Ray. The region is Ia Drang. The North Vietnamese Army has two battalions of crack troops waiting for them, and Joe had yet to receive a single lesson in the use of the M-14.

Under intense fire, surrounded and cut-off, his unit is faced with annihilation.

Incoming, the first book in Heroes of Vietnam series, is a short, fictional war story set during the Vietnam War. The book is a collaboration between Todd McLeod and Eric Meyer, the best-selling author of more than 50 war novels.

What listeners say about Incoming