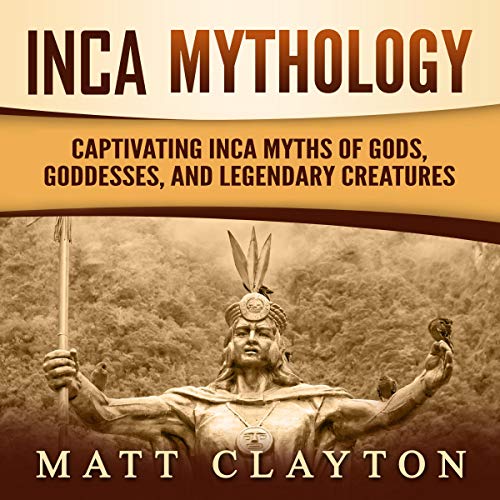 If you're looking for a captivating collection of Inca myths, then pay attention....

The myths of the Inca gods in the first section of the audiobook explain how the world was created and also detail the adventures of various deities as they vie for supremacy or act as tricksters in the worlds of mortals and huacas alike. The second section contains the origin myth of the Inca Empire, which was used to justify Inca political legitimacy. This section also presents other tales involving the mythologized deeds of Inca emperors and their interactions with divine beings.

The final section contains a collection of Andean folktales and a prose narrative version of the 18th-century drama Apu Ollantay, which may have been based on an ancient Inca tale and which tells the story of the forbidden love between Cosi-Collyur, daughter of the Inca Pachacuti, and the brave warrior Ollantay, whose name also graces the Inca fortress of Ollantay-tambo just north of Cuzco.

Inca Mythology: Captivating Inca Myths of Gods, Goddesses, and Legendary Creatures invites you to go on a startling journey and discover:

So, if you want a captivating collection of Inca myths, click the “Buy Now” button!

What listeners say about Inca Mythology

there aren't a lot of books about Peruvian history and mythology. this one was very well read and informative

i love it. A little different from reality but entertaining. Narrator is great story telling.

The Handbook of Inca Mythology contains a short description of ancient Inca and Andean Civilization as well as explains the reason why this culture has almost vanished under the influence of another, Spanish, culture. However, the only carriers of the Inca Mythology: Mythic Narratives, Themes and Concepts to which we refer today are the texts left by the chroniclers and Andean authors of the time of the Spanish invasion.

This book is for a general audience. It is well written with only occasional use of perhaps overly technical words, for example, chthonic for the underworld. It has a very good Index and a list of essential references, at least those that have been published in English.

So Far So Good

An excellent book that challenges many of the basic assumptions about ancient civilizations. It shows that they were highly interested in the skies, which dominated their day-to-day lives.

This book is delightful in knowledge and majorly intense. The following book was written as an introduction to his work. I am always pleased to bring only the highest quality research for the reader's enjoyment and education.

Liked this book, very easy to understand and informative. Would recommend to anyone going to Peru on vacation who have an interest in history.

The captivating history has done very well here too. It is a complete guide to learn about Inca mythology. I'm a fan of this author now.

Lots of information here, so I could see some people having a little trouble making it all the way through the book. Some of the astronomy was a bit over my head, as I am not used to many of the terms used, but the author explained things well enough that I could understand most of it regardless of my inexperience with astronomy.