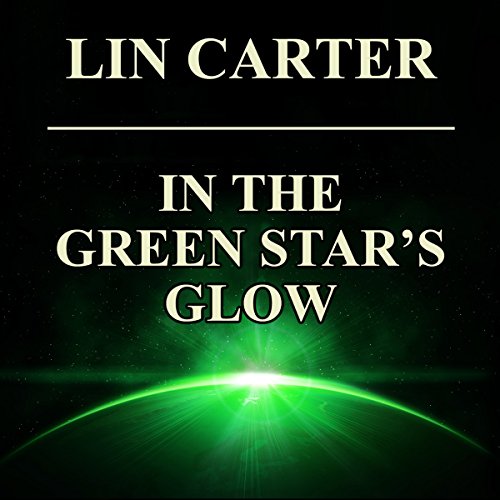 In the Green Star's Glow

The grand climax of Lin Carter's greatest adventure in the tradition of A. Merritt and Edgar Rice Burroughs!

He was Karn, the savage of the sky-high trees. He was protector and defender of the princess Niamh, whose very city was lost in the mapless jungles of the world under the Green Star.

But he was also an Earthman, whose helpless, crippled body lay in suspended animation in a guarded mansion in New England. It was his alien mind that drove Karn through perils that no other would dare.

But dare he must - for though that alien planet was replete with dangers and treachery, with lost castles of forgotten science and armies of mindless monsters, there was a cause to be won and a love to be rescued!

What listeners say about In the Green Star's Glow

Finally, our hero Karn, the crippled Earthman whose soul has been implanted in the body of a boy on a planet under a green star, comes to the end of his grand adventure. He has been through a series of harrowing events while trying to save the princess he has fallen in love with. In this last installment, he gets a short rest and then everything comes to a head. Old enemies resurface, new monsters appear and, perhaps most challenging of all, he’s captured by a band of man-hating teenage girls. Meanwhile, Karn’s allies are dealing with a race of hive-minded warrior ants and — would you believe it? — another evil scientist (actually, he was my favorite part of the book). It can’t possibly be a spoiler to say that everything eventually turns out okay in the end.

In the Green Star’s Glow is a fast read and, if you’ve enjoyed the GREEN STAR books so far, you won’t be disappointed. Basically, it’s more of the same except that this time it ends. As usual, the narrative is overly dramatic, often repetitive (how many times must each female be described as “lithe” and “supple”?) and sometimes just plain laughable. Here’s a particularly dreadful example, when Karn is a slave to a 13-year-old female who, he notices, is looking at him lustily:

I had been at work for about an hour and my naked hide glistened with perspiration which ran in long wet rivulets down my belly and thighs, cutting paths through the bark dust. The daylight gleamed in highlights along the raised ridges of the muscles of my legs and the great thews which swelled upon my back and shoulders. Each time I drew erect and lifted the heavy axe above my head, my powerfully developed pectoral muscles stood forth in sharp relief and the corded muscles of my taut midsection grew rock-ribbed and hard… I did not like the languid glow in her eye, nor the way she moistened her lips with the small pointed tip of her soft pink tongue. I opened my mouth, about to protest…

Not that’s just really bad writing, but I chose to laugh at it and be entertained. At the same time, I found it kind of creepy that Lin Carter, who was over 40 when he wrote this, would think that a 13-year-old girl who has just run away from a gang of men who were abusing her, would be turned on by a sweaty axe-wielding man. Also, I think Carter forgot here that Karn’s body is only about 13 or 14 years old. I’ve never seen “great thews” on a boy that age. And the protesting part? The gentleman doth protest too much, methinks.

What I did like about GREEN STAR was Carter’s lush and beautiful world where the people live in cities built on the limbs of huge trees and fear to explore the forest floor. Our hero never discovers whether the trees and insects are magnified compared to Earth, or whether the people are smaller than humans. Though we see plenty of the Green Star world during the course of the series, it loses a little of its luster after the third book. The fourth book feels like Carter is just milking it, but this last book is a decent, if completely predictable, ending.

If you like these sorts of male-oriented pulpy adventures in the style of Edgar Rice Burroughs, and if you find these novels cheap somewhere (I read the audio versions by Wildside Press which are pretty inexpensive), you may find it worthwhile to read the first three GREEN STAR books at least.