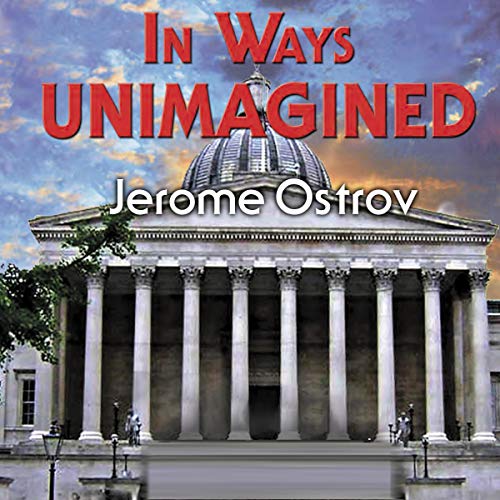 By: Jerome Ostrov
Narrated by: David Sweeney-Bear
Try for $0.00

In Ways Unimagined is the first of two completed novels that comprise Jerome Ostrov’s World War II saga When Country Calls. The story begins in April 1933, shortly after enactment of the Nazi exclusionary laws prohibiting Jews from occupying university positions. Respected anthropologist Anton Sternbloom has determined there is no longer any future for him at the University of Hamburg.

Anton and his wife Hannah decide to leave Germany. Anton and his adolescent son Jonathan set sail for England, where one of Anton’s colleagues wants him to teach. However, they are without Hannah, who has insisted on visiting her ailing mother in Danzig, one last time. As Hannah begins a perilous rail trip to the Polish border and Danzig, she reflects on her tearful separation from her husband and son and dreams of being with them in England.

Anton and Jonathan, too, long to be reunited with Hannah. But no news comes. As they await word from Hannah, father and son set out to reclaim their lives in their newly adopted country. Haltingly, Anton and Jonathan move forward, burdened by both the uncertainty of Hannah’s fate as well as the anti-Semitic prejudices of the day.

Touching on both sides of the Atlantic, the novel follows Anton through the evolving ranks of academia, the rarified precincts of British intelligence, and the code-breaking world of Bletchley Park, as he is propelled to his final duty post in the unforgiving battlefields of 1942 North Africa. Along the way, the listener is introduced to an array of real and fictional characters, whose presence highlights the challenges and perils of a world spiraling out of control.

What listeners say about In Ways Unimagined

I'm still on the verge of tears as I write this review of this well told & meticulously researched book. I found the story compelling, the characters well developed & the narration clear & well paced. I look foward to listening to the continuation in the sequel.