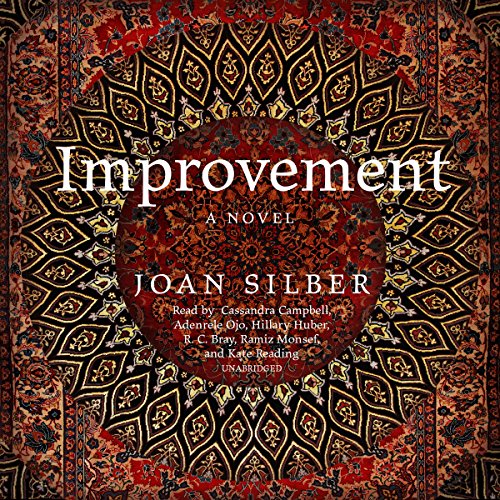 One of our most gifted writers of fiction returns with a bold and piercing novel about a young single mother living in New York, her eccentric aunt, and the decisions they make that have unexpected implications for the world around them.

Reyna knows her relationship with Boyd isn't perfect; yet she sees him through a three-month stint at Riker's Island, their bond growing tighter. Kiki, now settled in the East Village after a youth that took her to Turkey and other far-off places - and loves - around the world, admires her niece's spirit but worries that motherhood to four-year-old Oliver might complicate a difficult situation. Little does she know that Boyd is pulling Reyna into a smuggling scheme across state lines, violating his probation. When Reyna takes a step back, her small act of resistance sets into motion a tapestry of events that affect the lives of loved ones and strangers around them.

A novel that examines conviction, connection, repayment, and the possibility of generosity in the face of loss, Improvement is as intricately woven together as Kiki's beloved Turkish rugs, as colorful as the tattoos decorating Reyna's body, with narrative twists and turns as surprising and unexpected as the lives all around us.

Looks Like a Mess but Conjures a Messianic Goal

One answer to post-post-structuralism was the idea (mostly by way of Delleuze and Guattari) of the rhizome, the sense that there is a structure beyond easy structure, an organic form that blurs the line between a recognizable pattern and mess. That is, the rhizome has a pattern, but it isn’t anything we can replicate. It grows where space and opportunity permit, and it’s only after the fact that we can see it’s all done I support of the mushroom or other fungus above it.

I’m a big admirer of what seems the flavor-of-the-decade in American literary structure. I’m thinking of the model that Colum McCann pioneered with Let the Great World Spin, and that Jennifer Egan took further in A Visit from the Goon Squad. That’s the one where we get a story (or chapter) about one character, move to a story about a character only tangentially connected to the first one, and then on to others. There’s never an indirect connection among all the loose ends, but there are some indirect ones. The result is that we as readers get something like a bird’s eye view of a tangled group of people who don’t realize how they affect one another.

In case no one has yet done so, I propose calling those novels rhizomatic. That is, their structure becomes evident only after the fact. They grow where their stories take them, but they eventually double back. There’s pattern – or maybe just the residue of pattern to them – but it takes completing the novel to get a sense of the power it promises.

This is my second Joan Silber, and I think she is as gifted in this form as McCann or Egan – and that’s saying a lot. As I read Fools, her next most recent book, her innovation within this form is to look at communities across generations. In that book, she asks what became over the decades of the great dreams and passions of a group of “fools,” of the anarchists and Dorothy-Day-befriending young people who envisioned a better world in early 20th Century Bohemian New York.

I think this one is the doing the same thing only more subtly. The closest thing we have to a central character – though not the central narrator – is Kiki, a 1960s free-thinker who spends much of the 1970s living in Turkey as the aftermath of a kind of happy accident in meeting a man she loved on her world travels.

Kiki is far from a caricature, but at one level she embodies a radically hopeful sense that the world gives us the opportunity to be better than we are, that it promises us a chance at – as the title says – improvement.

For most of these narratives, Kiki is late middle-aged, and we see the influence she has on her niece, Reyna, who falls in with a crowd of small-time hustlers. We get a variety of narrators giving us chapters that don’t entirely fit together, but the movement of the book culminates in Reyna thinking she is sacrificing her aunt’s legacy – in the form of a valuable carpet she gave her from Turkey – in order to recompense a woman she may have inadvertently wronged. (SPOILER: Lynette holds her responsible for the death of her brother, Claude, but it’s a consequence of an accident. Reyna might have prevented it, but she’d have run a clear risk herself.)

As it turns out, though, Reyna’s selling the carpet to help someone who won’t even know she’s helped her is exactly Kiki’s legacy. As she says near the end, it wouldn’t be a gift if she’d had any hope for it other than that Reyna use it as she saw fit. Reyna, then, without quite knowing it, is an heir to Kiki’s hope for improving the world. And Lynette, who gets the money without knowing its source, goes on to improve her life and to bolster the memory of her not-as-great-as-she-pretends brother.

There are other stories of “improvement” throughout the book, but they’re never obviously so. Silber seems to suggest that we take a step forward and then we take one back, but as a deeply but subtly Jewish writer she seems above all to demonstrate a sense of “tikkun ha’olam,” a notion that it falls to us to try to make the world better than we found it.

This looks at times like it’s a “mess,” like it’s stories are disconnected and inelegantly concluded, but such a rhizomatic mess ultimately points the way toward the mystical promise – ever-forestalled – of mess-iah. That is, Silber reminds us that we may never improve the world to the point of perfection, but that’s not what we’re called to do. Our job, in this and every generation, is to try to make things at least a little better, to shoot not for perfection but only improvement.

So many words, so little meaning

Well, I finished. Hoping at every chapter that the story would finally come together. Alas... It dawdles into the dawn, more like finding some old diaries rather than a novel. Save your money and watch Short Cuts by Altman instead.

If it was a story I was interested in.

What could Joan Silber have done to make this a more enjoyable book for you?

It had no plot and weak characters.