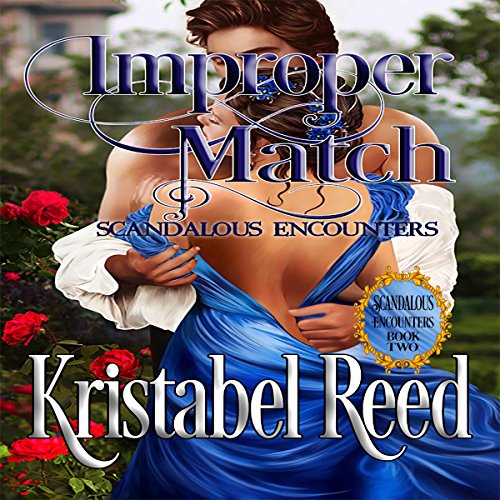 The daughter of a successful merchant, Selina Lyndell, never expects to marry an earl. But that's exactly what is about to happen. Their first meeting is entirely unconventional, but the moment Edmund Pembroke, the Earl of Granville, lays eyes on Selina, he's enchanted.

Selina tries her best to set her fears aside and enjoy their whirlwind courtship. But sometimes, the fates are cruel, and a vicious turn of events shatters all she holds dear.

Edmund isn't letting Selina go without a fight, be that on the streets of London, at the Old Bailey, or against the ton's vicious gossip. Nothing will stop him from clearing the name of the woman he loves.

A good story, but a little slow

Where does Improper Match: Scandalous Encounters rank among all the audiobooks you’ve listened to so far?

It's in the middle. The story was interesting, but very slow. IF the pace was better and the story tight, then it would have increased my rating.

It had the making of a good court room drama as well as romance. I thought the court case came up too quickly, instead of creating tension and having some "surprise" testimony that would have been exciting. It was over in just a few pages, but could have been the best part of the story.
instead, the author focused on the hero's angst that became self-pity after a while. There were so many lines that kept repeating and his inability to locate the heroine dragged out too long.

Have you listened to any of Danielle O'Farrell’s other performances before? How does this one compare?

Yes, I have heard this narrator before and was the reason I bought the book. She is fast becoming one of my favorites. If not for her performance this would have gotten a much lower rating.
I have bought all of the books she has narrated currently on Audible.

I kept thinking that this book should have picked up the pace a little, so was not in the moment enough to really feel anything extreme. I wanted to feel something more, as I liked the first book in this series and am hoping for an Octavia/Marcus book.
The love between the two main characters seemed to come too fast and was based on very little, so it made the last 2/3 of the book seem like filler.

I thought this book was okay and had very good narration. The story is a little slow, but has some good things going for it. It does provide some closure to the Isabella/Jonathan story from book 1 and sets up the next romance in the series. For these reasons I feel you have to read it to move the series along, but it may not be the best from this author.