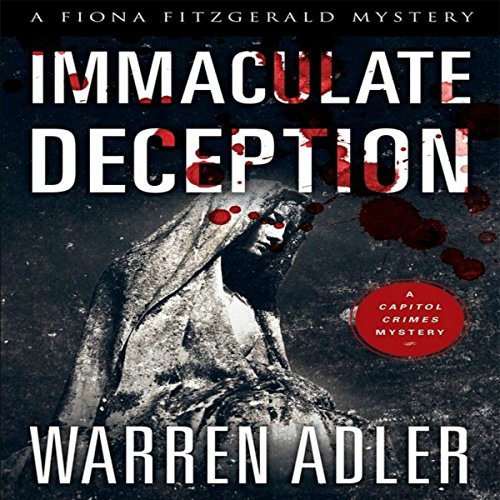 By: Warren Adler
Narrated by: Stevie Puckett
Try for $0.00

When an outspoken senator is found dead, there isn't enough evidence to point to the senator's death as a suicide, as everyone thinks. There is something just too perfect about the life of Frances "Frankie" McGuire - mother, Irish Catholic congresswoman from Boston, and powerful pro-life senator.

Sergeant Fiona Fitzgerald, daughter of a Senator, takes nothing at face value, especially when politics are involved. Everyone in Washington has a secret, and the senator's personal world turns out to be much more complicated than anyone ever knew. A pregnancy, an estranged husband, a mistress, and the fragility of life - both wanted and unwanted - collide, leaving Fiona to sort out the consequences of the messy case. Fiona faces the issues of abortion and women's rights just as she is contemplating her own pregnancy, with or without a steady man in her life.

What listeners say about Immaculate Deception

Held my attention throughout. Loved the twist at the end!

I received a free copy of this audio book in exchange for an honest review.

This was an alright book. It wasn't as good as previous books in the series, but characterization was good and Fiona was interesting. The case was good, and deals with suicide and abortion. It deals with it in a natural manner, making it easy to understand both sides of the argument concerning these issues.