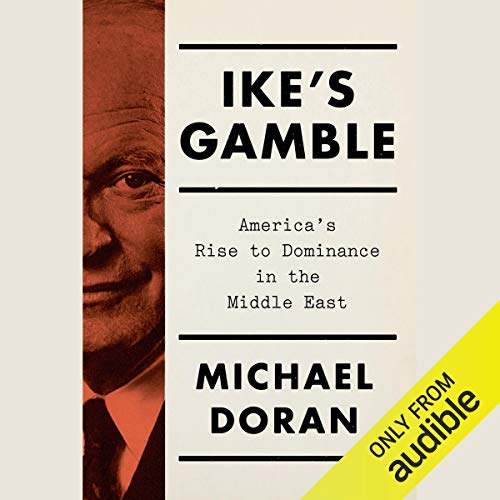 By: Michael Doran
Narrated by: Casey Jones
Try for $0.00

This major retelling of the Suez Crisis of 1956 - one of the most important events in the history of US policy in the Middle East - shows how President Eisenhower came to realize that Israel, not Egypt, is America's strongest regional ally.

In 1956 President Nasser of Egypt moved to take possession of the Suez Canal, thereby bringing the Middle East to the brink of war. The British and the French, who operated the canal, joined with Israel in a plan to retake it by force. Despite the special relationship between England and America, Dwight Eisenhower intervened to stop the invasion.

In Ike's Gamble, Michael Doran shows how Nasser played the US, invoking America's opposition to European colonialism to drive a wedge between Eisenhower and two British Prime Ministers, Winston Churchill and Anthony Eden. Meanwhile, in his quest to make himself the strongman of the Arab world, Nasser was making weapons deals with the USSR and destabilizing other Arab countries that the US had been courting. The Suez Crisis was his crowning triumph. In time, Eisenhower would conclude that Nasser had duped him, that the Arab countries were too fractious to anchor America's interests in the Middle East, and that the US should turn instead to Israel.

Affording deep insight into Eisenhower and his foreign policy, this fascinating and provocative history provides a rich new understanding of how the US became the power broker in the Middle East.

What listeners say about Ike's Gamble

Doran attempts to make this history relevant to today. He opens with “A new administration has come to power convinced that its predecessor has made a hash of Middle East Policy: the new team’s big idea: a bold diplomatic overture to the region’s leading Muslin State.”

The book covers the period from 1951 to 1961 and is about Dwight Eisenhower and Gamal Abdel Nasser of Egypt. Eisenhower tried wooing Nasser the first four years of his presidency. Nasser then grabbed the Canal in 1956 and aligned himself with the USSR. Doran states that in 1965 Eisenhower stated “I never should have pressured Israel to evacuate The Sinai.”

The book is well written and meticulously researched. The author states this research included newly released information from Russia. The author relied heavily on meeting reports, journals, diaries and memoirs of the key people involved. Doran admits he is providing a revisionist history in order to make his key point. Doran provides a background history then present Ike’s course of action and then analyzes the results. His in-depth analysis makes for interesting reading. The book covers a complex situation but is highly readable. Doran was the Middle East Advisor to the White House under the Bush Administration.

Casey Jones does a good job narrating the book. Jones is an award-winning audiobook narrator.

Eisenhower's evolution on the Middle East

captivating account takes listeners through the details of the 1956 Suez Crisis and along the way challenges the received wisdom about the events and their meanings.. this is not only a challenge to historians, but also to policymakers whose view of history shapes current events.

What interesting details on the background of all that led to the Suez crisis. Not sure I agree with all the author's conclusions, but what great history! A page turner in audio version

American Policy towards the Middle East in the 50s

“Ike’s Gamble” serves as a good introduction in to early United States efforts to engage politically in the Middle East during the 1950s, specifically during and after the Suez Canal Crisis. Michael Doran does a good job of engaging the thinking of President Eisenhower and his staff in their efforts to navigate the tricky business of working with allies, such as Britain and France, whose colonial spirit was still alive and sputtering its final breaths of life in the lead up to Suez, about which the U.S. had zero sympathies. Simultaneously, Eisenhower was trying to convince Egypt’s Nasser that he should engage in a policy leaning more toward the United States, and away from the Soviet Union. These efforts ultimately had the opposite effect that Eisenhower expected, with Nasser seemingly leaning to the U.S. and taking as much aid as it could from this country, while at the same time, and in reality, drawing ever closer to the USSR. There are lessons here for U.S. policy in the Middle East, and how we should never be entirely complacent that our “allies” in the region are playing the hands in the manner in which we think they have been dealt.

A veiw of the little know post war history

If you could sum up Ike's Gamble in three words, what would they be?

It make the start of the Cold War mush more understandable.

Nasser. Not well know to this baby boomer.

Have you listened to any of Casey Jones’s other performances before? How does this one compare?

Jones narrative are my favorites for clarity.

No. But I might listen to it again due to much information that apply to current events.

This is one of several book helping understand the current problem between the West and the Middle Eastern mind.