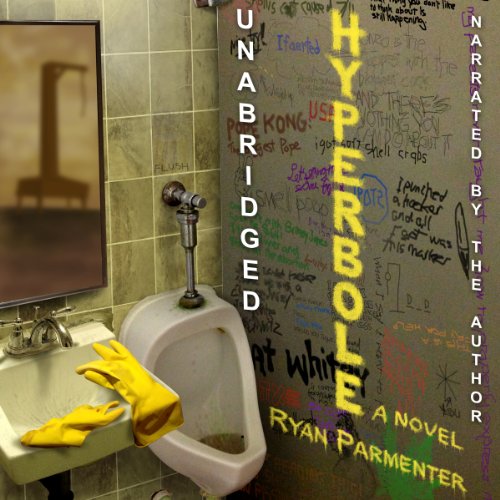 The most violent comedy since The Bible.

DC gets destroyed. Harland gets wasted. America gets the leader it deserves.

This pitch-black satire follows a disillusioned pothead and his friends navigating an American minefield of domestic terrorists, power-grabbing opportunists, and meaningless dead-end jobs. Philosophical, irreverent, and sometimes oddly hopeful, Hyperbole explores what might become of the laymen when America's head gets chopped off.

Fans of transgressive fiction and dark humor should grab this audiobook with both hands and not eat or sleep until it's consumed.

Hyperbole is the debut novel by author Ryan Parmenter, who has performed in and around Detroit, Michigan as a comic improviser, a teahouse musician with JRS, and as leader of the defunct progressive band Eyestrings.

What listeners say about Hyperbole: A Novel

This is an odd book, in the best sense of the word.

I'll admit that initially I found the style and narration needed a bit of time to tune into, but that only took a chapter or so.

Nearly every paragraph made me laugh, had me wanting to memorise something to quote at someone later, or had me silently agreeing "me too, me too". And this was managed without sounding irritatingly arch or too clever for it's own good: not easy to pull off.

Parmenter narrates, and did a great job. His native accent is distinctive but he manages to give each character an instantly recognisable voice without hamming it up.

Although there's certainly a degree of misery in this book, I thought the summary made it sound far bleaker than it actually was. Can't decide if that makes it a failure from some angles or not.

In the end, I cared about just about every character, laughed immoderately far more times than I expected to, and was left with a strong feeling of nostalgia for a place and way of life of which I have no experience. Very satisfying.

My one reservation is that it feels like a book that has so much original material that it may be a one-off. I'd be happy to be proved wrong.