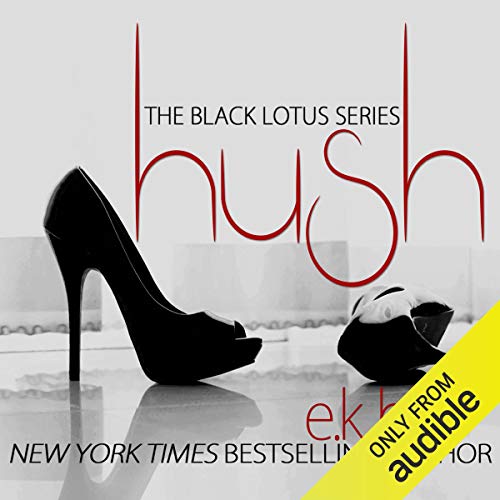 This is the final book in the highly acclaimed Black Lotus series, a dark psychosexual thriller like no other.

I've come to learn there is no escaping your past. It doesn't matter what you do, it will follow like a phantom - haunting you, reminding you.

Due to the dark and explicit nature of this book, it is recommended for mature audiences only, as some scenes may be particularly disturbing.

What listeners say about Hush

What did you love best about Hush?

I have enjoyed all three books in The Black Lotus Series. I really enjoyed having a different kind of love story. The love between H and h was not pretty at all. There were a lot of emotions between Declan and Elizabeth that you don't have in your "typical romance" story.
On a rating scale from 0-10, I would rate The Black Lotus Series as follows:
Book 1: Bang - 9
Book 2: Echo - 7
Book 3: Hush - 5

If you’ve listened to books by E. K. Blair before, how does this one compare?

Book 1: Bang - Excellent and kept me intrigued from start to finish.
Book 2: Echo - Didn't keep me up all night listening like Book 1 - but it was a great book.
Book 3: Hush - Felt like a bad acid trip in the end.
Great writing, but overall it was EXTREMELY disappointing.
After waiting over a year for the conclusion to Declan and Elizabeth's affair, I have to say, I am pissed off with what we got. The conclusion of Hush ultimately ruined the entire series for me.
My immediate thoughts after finishing Book 3 were:
"WTF?! That can NOT be the end!" (I even opened my audible app to check because I honestly thought I missed something that should have come next.)
"All of this time waiting for the ending of this series, and I get THIS?! What a waste of time!"

These characters had everything thrown at them to prevent them from being together but they still found a way to make it happen. Elizabeth was a horrible person for the things that she did to her husband. Everything she did was "revenge" for him doing the right thing when he was a child. As shitty of a person as she was, I still found myself rooting for her and wanting her to get some happiness and peace with Declan.
The Black Lotus Series was a rollercoaster of emotions for me and I couldn't wait for the big finish...unfortunately I did not get it. The ending of this series was a huge let down from E.K. Blair. Don't get me wrong, the writing is excellent. I am just pissed off with how she decided to end their story. I thought that for sure the ending was a dream Elizabeth was having, or a mental breakdown or something due to the "trauma" she received in the end. Unfortunately, it was not.
The ending of this book ruined the entire series for me.
While I was waiting for Book 3 to be released, I recommended this series MULTIPLE times. Now that I have finished the entire series, I wont be recommending it again. I feel like my time and devotion to this series and the characters in it was wasted because of the ending to it all.
E.K. Blair, I absolutely love your writing. You have a talent that is so unique in the way you are able to suck in your readers and hold their interest throughout the book. I am sorry to say that I absolutely despise the ending to this series.
You made me fall in love with Black Lotus despite/because of all of the dirty/angry/ugly/wrong/sad/abusive/vengeful....
Everything about Elizabeth should have made me hate her, but you were able to make her loveable through ALL of that. After everything she went through growing up and all of the shit she did to others, I was still rooting for her and holding out for her ultimate happiness. Instead, you gave me an ending that made me feel like I was on an acid trip and left me feeling empty.

What does Elena Wolfe bring to the story that you wouldn’t experience if you just read the book?

Elena Wolfe brings the characters to life in The Black Lotus Series. She does an excellent job in each book.

An angry love/hate affair between two catalysts, wrapped in a pretty package concealing the inevitable explosion within.

Maybe, E.K. Blair will redeem this series by releasing Ringing: Book 4. It could be the real conclusion to this story and it will basically tell us that the ending of Book 3 was a hallucination that Elizabeth had due being shot in the head and being in a coma. After being in a medically induced coma for months to allow her brain to heal.

Bang is in my top 3 favorite books of all time! I had never read a book that emotionally captivating! Then I waiting months for Echo to come out, and even though it wasn't was good, and there was some overly forced (unneeded) drama; the characters intense passion still drove the book! Then the long wait for Hush . . . . overall it was a good book, and you still feel the passion between the main characters, just not as strong as before as the book goes on. Then the book ends, and you think she gets her happily ever after finally. . . . but NO!!!
I'm sorry but to see them both die in the last sentence in of the book after a marriage proposal is ridiculous! But the epilogue is SO far fetched I actually threw the book!! Their happily ever after is living life as giant fuzzy fucking caterpillars. . . what the actual fuck?? Caterpillars!!! I want my time and money back!!! CATERPILLARS!!!
Will never waist my time in another EK Blair series again!!!

SERIOUSLY I'm so mad. Wasted time the ending is the worst ever!!! I hope the writer makes an alternate ending... Whistle blower everyone DIES and they all turn into caterpillars ......

Still sitting her an hour later trying to figure out WHY she ended it the way she did. Disappointment.

The ending was as dumb as a box of dicks. Liked the first book and I think the author would have been fine stopping there. Although, I did have to finish all three books, so I guess that says something. I could have done without all the dream/caterpillar bs too. 😯

I was so into this series but I feel cheated. I have never felt so let down and here I am 24 hours after listening to the ending am I am still sitting here going WTF did that really just happen? I feel robbed...I have had books have bad endings but I have NEVER had a book hit me where I wanted to go back and not do the series as I am so frustrated with it. Stop reading now if you don't want spoilers but caterpillars????? I'm into HEAs but caterpillers aren't HEAs, that's a bad acid trip! I know they were in the storyline before but it's a horrible ending.

The narrators were good, the other books in the series were great and I was hooked throughout it. Other than the ending I was hooked.

And wish it hadn't ended the way it did, but overall it was a great series of books. I'm so glad that Declan and Elizabeth were able to be together and find such true love through their trials and tribulations. The narration was wonderful.

I didn't really get the point of the story line. All main characters died and turned into caterpillars.

Ending leaves a lot to be desired. Great thriller, mystery and sex as well as love story.

If you could sum up Hush in three words, what would they be?

The ending was not expected. Although, a HEA a disappointment

Which character – as performed by Elena Wolfe – was your favorite?

This book shocked me. So unexpected

Loved how this tied in with previous books ie the continuation of Carnegie , very subtle and narrators were excellent.