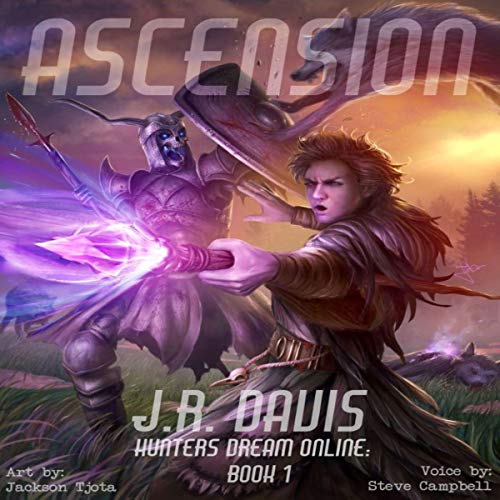 With his chance to join the world's first VR MMORPG, Robin takes the class of necromancer in a world of constant conflict facing off against gods, monsters, and other players. Will he be able to stay the tide of destruction and save the village he swore to protect, or will Ignis and his guild prevail and lay waste to the land?

Join Robin, his undead companion Charon, and his friends as they take on the world and other players! Dungeons, player versus player tournaments, large scale battles, and a deer-leasing agent named Chester. This is Hunters Dream.

I was given a free copy of this book in exchange for a review, my review is unbiased

This book was lots of fun, most of it had to do with the character dynamics. The dialogue and puns were amusing and there was a lot of camaraderie and action adventure.

The world of hunters dream so far is pretty generic, and the classes we have seen are as well. There is a bit of logged off real world stuff going on but it so far has had no relevance to the story, and I don't think that it's going to.

The narration is solid, characterization spot on, pacing is good

Overall the book is great but it's not deep, it won't turn out to be a masterpiece or super creative but it has great personality

First off I love the necromancer class. 2nd I am for any story that trashes player killers. That being said the story has great quests, awesome NPC’s, good plot lines, nice skill development, love the back story for his undead companion. Our Mc and his band of companions must join a guild and defend the villages of various NPC’s from some rude as hell guild and their nasty ways. The battles range from individual all the way up to full guild battles. Truly well written and narrated. I was voluntarily provided this free review copy audiobook by the author, narrator or publisher

I Can’t wait for more! Narration was wonderful. I loved the story and game world

My first book from J.R Davis

This was my first book from J.R Davis and my only complaint is that it was too short. I looking forward to next book.

Really good story, this is a great example of lit rpg done right. Steve Campbell did a great job, he really shines when he has a good cast of characters.

I listened to this three times, at least!

To get the legal stuff out of the way, this Audible book was provided free in exchange for an honest review.

Hunter's Dream Online: Ascension (Book 1), written by J.R. Davis, is a well-rounded LitRPG novel for anyone who's spent time in MMORPGs like World of Warcraft, Everquest, The Elder Scrolls Online, etc.

I'm not going to lie, I really REALLY liked this audiobook. In fact, I've listened to it three times so far! For those of you who have never read a LitRPG, Hunter's Dream Online: Ascension is a great introduction to the genre. Suffice to say, I have J. R. Davis on my watchlist for when the next part of this series comes out on Audible. I enjoyed the storytelling, the joke-making, and the narration so much that I've listened again and again to this book. 5 stars!

If you would like to see my FULL REVIEW, please visit https://duelog.me/ascension-review

This was hands down one of the best written LitRPG stories I’ve listened to in awhile! All the characters are awesome, and thanks to the flawless performance by Steve Campbell, they are all easy to fall in love with....or hate to the fullest extent lol such an amazing story, I can’t wait for the next one!

This was an entertaining start in a series. The author does a good job of setting up the virtual world and it's relationship with the real world, creates some interesting characters, and then creates a realistic virtual world with some cool quests and reasonable interactions. It's not super heavy on the rpg aspects so you could probably enjoy it just fine if you were looking for a more traditional fantasy as well, though it might be a little short on world building in that case since you'd be looking for more explanation in the start than "this is a fantasy rpg". Regardless it's fast paced and pretty good. The part I'm not huge on is the character of the antagonist (which might be a good thing in this case, but he turned me off a bit). It's cool to see the concept of griefing and bothering other players in a world carried over to this format as it's something people who play games like these deal with frequently. I'm definitely up for another journey into this video game world, especially as I feel given the foundation built in this story the author will be able to expand and make it even stronger.

Slow and Steady Wins the race

The book entirety was awesome a bit of the slow grind at first, but the main character is very down to earth and funny a lot of side commentary which I like personally especially if the character is funny. How also bringing the characters together and making them all down to earth is big in this book. Hopefully we wont wait too long for the next.

On the edge of greatness

I actually finished listening a number of days ago but have been debating my review. This is one of those books that really makes me wish audible allowed half stars because I would have given the story a 3.5. Now honestly I would have loved to have give this one 5 stars across the boards, but one thing stopped that. Let me first say that J.R. Davis did a great job. It's a fun story and he clearly has a great grasp of the gaming mechanics that are essential for a LitRPG book to be satisfying. The weapons, the various skills, the leveling...all of that is here, and done quite well. I also have to say for the most part I really liked the characters. So what's my problem? Well it comes down to one thing...tension...there didn't seem to be anything at stake for our hero. There are certain tropes you come to expect from LitRPGs. Not all of them have people trapped in virtual world, but there is always some very real loss that can come from what happens in the virtual world. That didn't seem to be the case here. If he were to die in the game he wouldn't die for real, his character wouldn't be erased...nothing. As we saw with some of the characters, if you die in the game you just respawn back in town. So where is the risk? The tension? What you end up with is a story about a guy playing a video game. An enjoyable story, but still it never really felt like anything was ever on the line for our hero. Towards the very end there seems to be hints that things are more than they seem and maybe we'll learn more in book 2, but as for this book the tension and payoff just wasn't there. I did enjoy the book quite a bit and would definitely like to see what comes next. I just want there to be real repercussions for our hero should he fail. Steve Campbell does a fantastic job with the narration and I'll definitely have to check out more of this work in the future. I was given a free review copy of this audiobook at my request and have voluntarily left this review.

Good story would recommend as a nice listen
like the use of a necromancer as main character.
characters is story are funny can see big thing in this series.

an average LITrpg, and that's not bad

everything about this story have been seen before in the genre with the possible exception of the MC necromancer not being able to summon a literal army.
but that is not bad, it has all the good parts without spreading itself too thin.
so while average, it's still highly enjoyable and entertaining.

Steve does a good job of keeping you interested and invested in the story by bringing life to the emotions of every character making them relatable and worth cheering for.

The author creates an interesting world and class system, I particularly enjoy the fight scenes and the mc (unlike many other litrpgs) has a brain! This story starts off slow but it does pick up... It could contain a few more jokes but that's just me being cynical... On a side note the narrator does an amazing job, he really makes you feel like you are in the book! I will be continuing on with this series

I thoroughly enjoyed this book, it's nicely paced and full of everything you'ed expect from a Litrpg tale. It's not heavy on states nor is it lacking.
The world building is imaginative and well written.
The main character is very likeable and fast becomes a faveroit, the rest of the characters are equally likeable.
The characters progression is also nicely paced.
The narration is superb, really bringing each character into thier own, and giving each a unique quality.
A deffinate 5⭐⭐⭐⭐⭐ looking forward to the next instalment.

good story, even if your not a fan of computer games, you will enjoy this listen, A really fun book and great narration

Some good story premise in this audio as we see our usually LitRPG scenario. Not amazing, but a good listen however almost until the end what kept me interested was the group banter and their interactions with a certain merchant. The final battles and ending did make this an add to listen/read list due to the ending so credit due to how this was planned out.
I requested this audio and have decided to leave my thoughts on this.

Though it possesses moments of quick humour to make you chuckle, it remains unceasingly average from start to finish. nothing wrong with it, but in my opinion it lacks a real drive in the story.
We are given nothing of the main character except he is a gamer, we are provided card-board cutout villains and allies but we are given little more than that.
Though the narrator's accents were by no means good, they were acceptable and his voice was far less nasal than others I've heard.

overall I enjoyed the book, but I didn't feel like any of the characters were real people and therefore was not invested in their struggles. They were merely stereotypical archetypes of warrior, thief etc.

I was given a free copy of the book for an honest review.