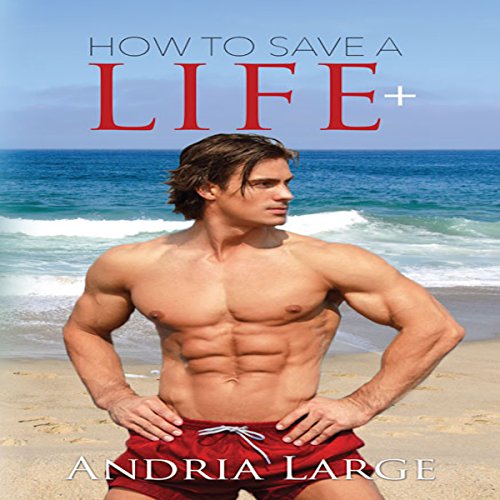 How to Save a Life

By: Andria Large
Narrated by: Paul Bright
Try for $0.00

How do you save someone's life?

There's the obvious way of physically saving them from a tragic end.

Then there's the more subtle way of saving someone who doesn't know they need to be saved. Someone who is drowning emotionally and has no idea that they are slowly dying.

Ezra Whitmore is one of those people. After tragically losing his wife, he's still going through the motions, but not really living. All he has now is his son, Spencer, and his career as a dentist. The life he thought he was going to have has been torn apart. The things he had once enjoyed no longer feel the same without the person he had shared everything with.

That is, until Ferris Jenkins crashes into his life. Not only does the lifeguard save his son from literally drowning in the ocean, but he also slowly starts to bring Ezra back to life.

As soon as Ferris lays eyes on Ezra, he can't get the gorgeous dentist out of his head. He knows nothing will ever happen between them because...well, Ezra is straight and he's gay. You can imagine Ferris' surprise when Ezra gets drunk one night, kisses him, and admits that he's always been attracted to guys. This gives Ferris hope that maybe, just maybe, he can land the man of his dreams.

Warning: You know the drill! For mature audiences only. Contains some graphic m/m sex scenes. Please remember that this is a work of fiction and comes from my own imagination.

What listeners say about How to Save a Life

I love this book, have read it many times. I was so excited when I saw there was an audio of it. I'm so disappointed. DNF narrated book. I'm sorry Mr. Paul but your Ferris.... you made him sound like a 12 year old. The inflection6 were over the top and made him sound like he was constantly asking a question. I had to stop because it annoyed me to no end. The book is a must read. I highly recommend this one and the next, which is How To Save Love which is Spencer and Jesse's story. I'm still on the fence about audio books just for this reason, the over the top narration. I know it's hard to do, I can't read out loud because I always yawn...weird huh. So I have mad respect for narrators. This particular book.... not good...Maybe if redone I'll try again.

Wow what a bad narrator

The book was okay but the narrator made it bad. Like how did he get into this line of work bad *shaking my head*

Decent idea for a story

The narrator doesn't know how to narrate a book. Worst I've ever heard.

Could you see How to Save a Life being made into a movie or a TV series? Who should the stars be?

One can tell it's written by a female.

I have a different opinion than those who read the book first, I thought the audiobook was great. This author and narrator was new to me and I thought it was well done. I think those who read the book first had a different voice in their head and this wasn’t it, but if you go into it with no preconceived notions it’s a light and fun listen. Cute story.

I thoroughly enjoyed this story and the narrator had a great way of conveying emotions.

The narrator sounded like Owen Wilson when he did Ferris' voice - too cute. This was a sweet story.

This book tugged at my heartstrings all the way through! Be aware that the narrator is a little odd - he is very emotionally expressive but a lot of his cadence and intonation is unusual - he makes a lot of things sound like a question when they aren’t. However, his expression mostly makes up for that - it’s just a little distracting. The story is compelling and the character development is satisfying.

How to Save a Life

Audio- OMG... Paul Bright sounds a lot like Owen Wilson.. LOL.. That is all I could think of during this narration. Paul did a great job with this book and I would totally listen to another book he narrates any time!! And I really kind of hope he is the narrator for book two as well..

This book is Sweet. Not a whole lot of angst going on, just a little family drama. But I really did like this book. Cute couple and really Cute kid/teen. Just a good storyline all around. *no spoilers* But oh man there's one part at the end that just pulls at your heart when you hear/read it, your on the edge of your seat for a minute there. But overall nicely done.

I can't pick a favorite character because they all had their moments that they were my favorite. It was when they all became brave enough to just be them selves and stand up to their family.

Paul is good narrator. He did really well just wasn't my favorite when it came to the girl voices.

The most moving part was when they were in the hospital that part made me tear up. Also at the super market I just wanted to pound my fist in the air for the victory.

This book is amazing. It gripped me from the beginning and I didn't want it to end.

An asome story. And the narrator is super asome. He really brings the story to life and you cry and laugh with them. I really love It!!! Starting Spencer's story now!