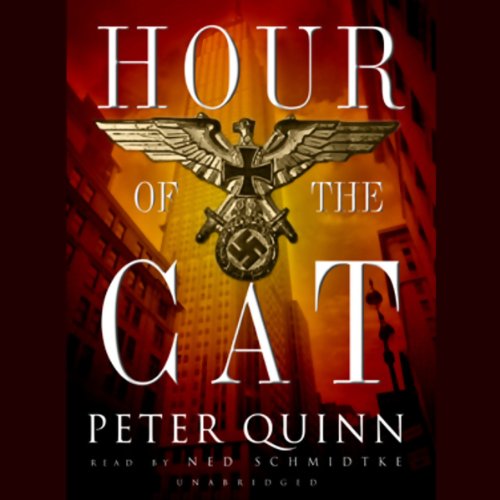 Hour of the Cat

By: Peter Quinn
Narrated by: Stefan Rudnicki,Carrington Macduffie
Try for $0.00

On the eve of World War II, a murder in New York City draws two vastly different men, an American detective and a German intelligence officer, into the gathering storm.

One of hundreds of simple homicides each year, indistinguishable from any other in 1938, was the death of a spinster nurse killed in her apartment. A suspect is caught and convicted. Private Investigator Fintan Dunne is lured into the case and coerced by conscience into unraveling the setup that has put an innocent man on death row. Following the trail leads him into a murder conspiracy of a scope that defies imagination.

Meanwhile, in Germany, with no limits to Hitler's mania, Admiral Wilhelm Canaris, head of military intelligence, knows that the "hour of the cat" looms when every German must make a choice.

"Quinn's novel is as much a rebuke of the systematized violence of war as it is straight-up spy thriller." (Publishers Weekly)

What listeners say about Hour of the Cat

Strip away everything not involving Fintan Dunne and you are left with a 1930s detective story in the fashion of Dashiell Hammett. When you add in the other story lines that crop up from time to time the result is an audio book that starts slowly and is a little difficult to follow. The other story lines involve eugenics, the pseudoscience that the Nazis used to justify genetic cleansing and the holocaust. The book improves as the several story lines come together and the ending is satisfying.

Against my typically better judgement, I went ahead and selected Hour of the Cat even though there was only one review done to date. How nice to be do pleasantly surprised! The characters were interesting and the multiple plots well crafted. Narration was very good also. (My only narration complaint was I just didn't like the sound of the voice he assigned the detective - shoulda been more like Bogart than Damon Runyon. :=) I really enjoy the 1930s film noire style and also WW II Nazi thrillers - this one combines them both very well! Well done!!!

The book was interesting. I actually liked the side stories better than the main story. O a whole it was ok.