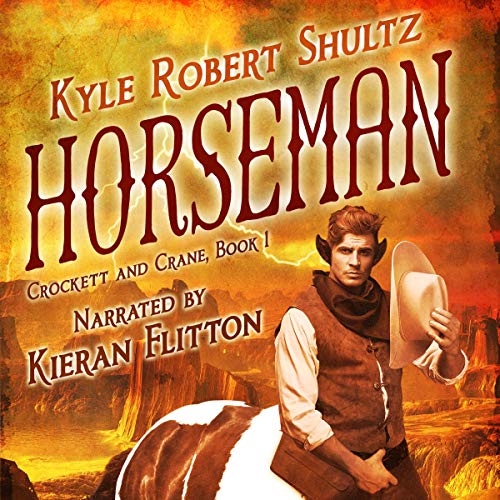 Horseman: A Tale of the Neverican Frontier

By: Kyle Robert Shultz
Narrated by: Kieran Flitton
Try for $0.00

Todd Crane is on the run from the law.

But even the magic ring that lets Todd turn into a centaur isn’t enough to help him escape from Marshal Amy Crockett, who’s got a bone to pick with him. Something about selling not-entirely-legal magic potions. No big deal, right?

Hang on. It gets worse.

There’s a downright terrifying monster roaming across the West...even worse than the usual monsters one finds out there. A creature that could leave the United States of Neverica in ruins.

The Headless Horseman is back.

Todd and Amy are the only ones who might be able to save the day. Fortunately, they’ve got help...in the form of a guitar-playing dragon shifter and a book-loving gorgon.

Yes, this is the western you’ve been looking for. Enjoy.

What listeners say about Horseman: A Tale of the Neverican Frontier

It started out a bit slow

The story started out a bit slow, it took me a little bit to get sucked in... but I’m glad I kept going. It was really enjoyable, and in my opinion, Julio carried the comedy. He was by far my favorite.
I am starting to notice how all of theses stories are tied into each other..making cliff hangars make more since...and leaving me feeling a bit mind blown and excited to start the next one!

Kyle Robert Shultz is an amazing author and I think this was one of my favorite books by him. I did love the Beaumonte and Beasley books I've read so far, but I feel like this book had a much richer world to play with. That, and I love horses and dragons. And both featured strongly in this novel. (Tolkien would be proud) There were a lot of twists and turns. Things I didn't see coming. But still, the book flowed smoothly from one scene to another with believable motivations and perfect pacing. More than that, Shultz managed to beautifully juggle a cast of four characters and fill out each with wonderfully engaging personalities. This book is perhaps a bit darker and heavier than some of his others. Not only with the actual plot, but with some of the themes and interactions with the characters. This is probably why I liked it more though. And Kyle didn't take these things head-on but colored them with his characteristic humor and witty one-liners.
Overall, this is a great book and I can't wait to continue on.

It should be no secret that I am delighted with everything Kyle Robert Shultz writes. His work is humorous and thought provoking. So when it came out that he was having audiobooks made it was a no brainier that I should check them out.

Horseman takes place in an alternate American West, one that has magic potions, mythical creatures and hilarious characters. the title works on multiple levels as the main character Todd crane is both a centaur and a relation of Icabod Crane of Sleepy Hallow fame.

Kieran Flitton is a wonderful choice for this book. not only does he have a mastery of voices, his accents are perfect, and his comedic timing is spot on. His performance of Todd's fist person POV is a joy to listen to. Kieran gives his performance a western flair without over whelming the speech with twang.

I highly recommend this book anyone who loves fantasy, westerns of just wants a good laugh.

Nice fantasy, better than most

A good book that serves well as a time-spender for sports or driving. Nothing special but nothing irritating either. Heartily recommend if you can get it at a discount.

This book never fails to be amazing. I laughed and teared up, sometimes multiple times within the same chapter. The characters are all so unique and well-developed, even for a shorter story, and the creativity fills me with joy.

Great for fans of fantasy, time travel, Westerns, and comedy.

The voice is pretty good. Not what I imagined, but I love how the narrator reads it with a western accent! I love the fact that you get the whole wild west feeling in this book! And once again the way that he changes the story is amazing! I like how he doesn’t stick too close or to far away, just right. I felt like Julio was trying to be like Crispin and didn’t like that too much, but it was still really good!

Fantasy Western. I suppose I should have guessed that people have done it, but I hadn't...and it works! Horseman is set in a world where myths and folklore aren't just stories, but very much real. Without giving too much away, you'll see versions of characters like Rip Van Winkle, as well as descendants of Davy Crockett and Ichabod Crane, plus monsters and other surprises along the way.

I honestly wasn't sure what I was going to get when I picked up this book. What I ended up with was many laugh-out-loud moments, heart-racing action scenes, and characters I desperately want to learn more about. Book two, here I come!