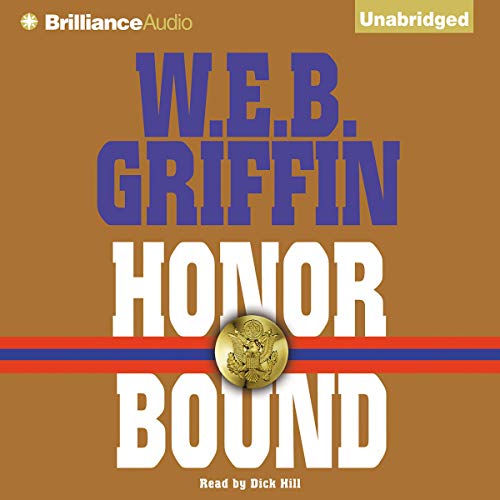 It's 1942. A Marine aviator, an Army paratrooper and demolitions expert, and a non-com radio man are on an impossible mission for the OSS - sabotaging the resupply of German ships and submarines by any means necessary!

First Lieutenant Cletus Frade is fresh from Guadalcanal. He teams up with Second Lieutenant Anthony Pelosi and Sergeant David Ettinger for the most critical OSS operation of the war.

Under the direction of the mysterious Colonel Loman, they venture into a simmering stew of German and Allied agents, collaborators, and government security thugs, of men and women hiding their pasts and plotting their futures - all in supposedly neutral city of Buenos Aires.

"Griffin's reconstruction of upper-class Argentine society in the 1940s provides an exotic and credible setting for a tautly written story whose twists and turns will keep readers guessing until the last page." ( Publishers Weekly)

What listeners say about Honor Bound

The book started slowly but as you listen you begin to like the main characters, father, son, and the other characters linked to them. I'm not normally a fan of military based novels but will puchase other books in the series by this author. I would have given this book 4.5 to 5 stars with the exception that it ended a bit abruptly. I would have liked a bit more follow up on the relationships the author developed throughout the novel but still well worth listening to.

I read the series years ago, now I want to revisit them all in audio format. About the only complaint that I had was that someone should have told Dick Hill that the name Jorge is pronounced "Hor-Hey" and not "Hor-Gay". That was just annoying.
Other than that I enjoyed it.

It was a good listen. I enjoyed it. However, for a book set in Argentina, the narrator had poor Spanish pronunciation.

86 year old William Edward Butterworth III has been authoring or coauthoring military thrillers under his own name and various pseudonyms for 57 years. During that period he has released over 160 novels about one-third of which are available in audiobook format. Butterworth's best known pseudonym is W.E.B. Griffin. Honor Bound is one of many military thrillers released under the Griffin pseudonym; some are coauthored with his son William Edward Butterworth IV. The best of the books are written by Griffin alone.

Honor Bound is an excellent military thriller with outstanding narration by Dick Hill. I highly recommend all of the W.E.B. Griffin novels written without a coauthor. Most of the novels are narrated by either Dick Hill, Scott Brick, or Eric G. Dove who are three of the very best.

When will I learn? I read the first book of Semper Fi, thought it was pretty good and when several more of Griffin's book went on sale, I bought three. This is the second I bought and it is awful. Nothing happens in this book. I stuck it out for eleven chapters, but lost patience.

Dick Hill is my favorite narrator and he did a good job, although I will agree with others I did not like the echo effect. If you have listened to any of McCaffery's Dragon books, then you know what I an talking about.

You need more books to listen to by W.E.B. Griffin.

Typical WEB Griffin story. Fun to listen but predictable. That said this narration was the best of the 10 or so I've listened to.

A great 1st book for a No doubt great series

I enjoyed both the characters this and the setting of this work. I also consider the story quite believable.

I've procrastinated in reading this book for several years...not wanting to begin a 21+ hour book leading to a 130 hour series. But, here goes... We get to know most of the characters pretty well. Three OSSers attempt to disable a German submarine tender in neutral Argentine waters. But, that's only abou 1/10 of the book. The rest is a soap opera. It's also notable that the technology is of the WWII period. Fun read.

Too much foreign accent to hear it or understand e

good story line and concept. narration should be in English. hard to listen to heavy accents backing up a lot