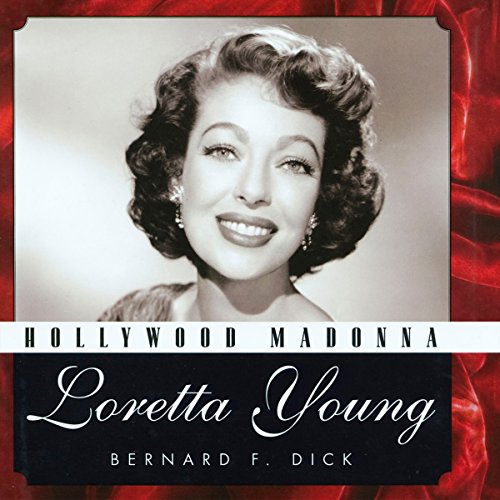 Loretta Young (1913-2000) was an Academy Award-winning actress known for devout Catholicism and her performances in The Farmer's Daughter, The Bishop's Wife, and Come to the Stable, and for her long-running and tremendously popular television series. But that was not the whole story.

Hollywood Madonna explores the full saga of Loretta Young's professional and personal life. She made her film debut at age four, became a star at fifteen, and many awards and accolades later, made her final television movie at age seventy-six. This biography withholds none of the details of her affair with Clark Gable and the daughter that powerful love produced. Bernard F. Dick places Young's affair in the proper context of the time and the choices available to women in 1935, especially a noted Catholic like Young, whose career would have been in ruins if the public knew of her tryst. With the birth of a daughter, who would have been branded a love child, Loretta Young reached the crossroads of disclosure and deception, choosing the latter path. That choice resulted in an illustrious career for her and a tortured childhood for her daughter.

Would you try another book from Bernard F. Dick and/or Cira Larkin?

Dick does a thorough examination of the life and times of Lorretta Young, so much so however, that the overabundance of details made it a little dry. Larkin's voice was smooth and appropriate for chronicling such a glamorous Hollywood starlet and her tone and treatment of the text made the wealth of facts much more palatable. I would listen to another one of her narrations, but probably not one of Dick's works.

Would you recommend Hollywood Madonna: Loretta Young (Hollywood Legends) to your friends? Why or why not?

Probably not, unless they had a real interest in Loretta Young specifically or wanted to learn more about the lifestyle of starlets from that era.

No one part of the book stood out for me.

Did Hollywood Madonna: Loretta Young (Hollywood Legends) inspire you to do anything?

Listen to it until the end.

This book, however, does a fairly good, though I don't believe, comprehensive, job of putting Loretta Young's very long and successful career into perspective. He goes off track about other actors and their films, more than the focus on Loretta. You don't get much on the personal either. So its okay, but if your looking for alot information you won't find it here.

a little too long. not enough Loretta,

less about her movies

kept going back and forth. in time .. you lost where you were

Disappointing: in need of a good editor

Would you try another book from Bernard F. Dick and/or Cira Larkin?

Hollywood biographies come in many flavors, but this one seems to defy categorization. It tries to take an academic approach when analyzing the films of Loretta Young (concentrating more on direction and lighting than seems warranted), but slips into romantic, decorous prose when describing Young's religious faith, her romances and "romantic fantasies" and the ways in which the author think his subject's life is paralleled in her film work. Romantic haze seems to affect the author too, as he asserts that Loretta Young's first sexual encounter was with Clark Gable in 1935, despite her having been married, and in at least one publicly acknowledged relationship prior to meeting Gable at 22. Could this be true? Possibly, but the author provides no evidence; not even a quote or source for his statement. There are odd tangents, too, such as taking the opportunity to allege a co-star's homosexuality in a way that has no connection to Loretta Young. In fact, the author's tendency to engage in long tangents about the history of a particular director or co-star makes the book hard to follow in some places. The tangents but one source of imbalance in the book. Between her early childhood and her retirement from film in the 1960s, Loretta Young's story is moved along almost exclusively by descriptions of the films she made. She is alleged to be a good businesswoman, but we learn next to nothing of her abilities in that area. I would also have expected a bit more about her personal life; relationships with her children and husband, etc.

Would you be willing to try another one of Cira Larkin’s performances?

The performance was engaging, but I was appalled by the number of words and names mispronounced. The mistakes were repeated.

If you could play editor, what scene or scenes would you have cut from Hollywood Madonna: Loretta Young (Hollywood Legends)?

This book was in need of a good editor. Though the story is told chronologically, some incidents are inserted in odd places. Small anecdotes are repeated verbatim, or retold with slight alterations. The balance between life story and film review compendium is problematic. The author can't seem to decide whether he is an academic or a fawning fan of a movie star. The voice is garbled, and the book is sometimes simply over-written or repetitious.