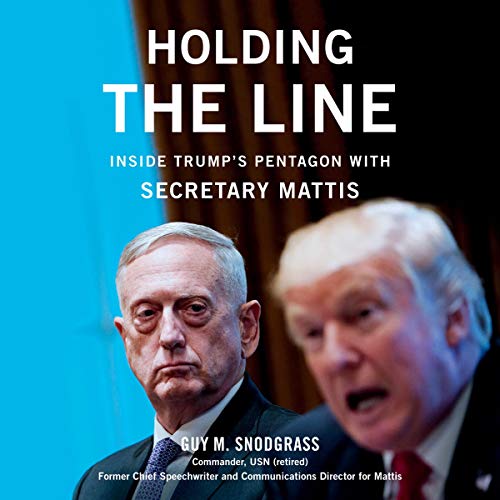 "This is the memoir America wishes Jim Mattis had written." (The Washington Post)

An insider's sometimes shocking account of how Defense Secretary James Mattis led the US military through global challenges while serving as a crucial check on the Trump Administration.

For nearly two years as Trump's Secretary of Defense, General James Mattis maintained a complicated relationship with the president. A lifelong Marine widely considered to be one of America's greatest generals, Mattis was committed to keeping America safe. Yet he served a President whose actions were frequently unpredictable and impulsive with far-reaching consequences.

Often described as the administration's "adult in the room," Mattis has said very little about his difficult role, and since his resignation has kept his views of the President and his policies private. Now, Mattis' former chief speechwriter and communications director, Guy M. Snodgrass, brings listeners behind that curtain. Drawing on his 17 months working with Mattis, Snodgrass reveals how one of the nation's greatest generals walked a political tightrope while leading the world's most powerful military.

Snodgrass gives us a fly-on-the-wall view as Mattis....

As the first book written by an insider with firsthand knowledge of key decisions and moments in history, Holding the Line is a must-listen for those who care about the presidency and America's national security. It's filled with never-before-told stories that will both alarm and reassure, a testament to the quiet and steady efforts of General Mattis and the dedicated men and women he led at the Department of Defense.

"For all of you who've been waiting for a tell-all account of Jim Mattis' 710 days as President Trump's first Pentagon chief, that book has now been written." (NPR)

"[A] fly-on-the-wall view of how the retired general operated at the Pentagon amid myriad crises, from issues with North Korea and Iran to trying to get on the same page with a chaotic White House." (Task & Purpose)

"Snodgrass’s account of the wild briefing provides a taste of his on-the-record, eyewitness candor about the two years Mattis spent trying to keep things from spinning out of control - a candor readers will not find in the former defense secretary’s own circumspect memoir.... Snodgrass...has stepped forward to fill some of the vacuum created by Mattis’s silence.... Snodgrass saw more than enough for his memoir to take its place in the growing annals of government dysfunction." (NYT)

"[A] must-read (if not a cautionary tale) for any professionals - military or otherwise - who desire access to the biggest levers of power." (Military.com)

What listeners say about Holding the Line

A jarring fanboy telling of his time with Mattis

I've read Mattis book "Call Sign CHAOS" and found it to be a very thoughtful book about international issues. I like Mattis. I thought this book may provide more insight into the man and his tenure as SecDef. Instead, this is a story akin to a primary school student telling his class of the awesome summer he had and the time he met his hero. The lavish praise of Mattis is a bit much while purposely contrasted by a loathing of Trump.

I decided to end my listen after the author reads the mind of a secret service agent and tells us the purpose of the agent's actions. The agent simply asked if the author needed to be in an unsecure room observing the President. However, the author tells us that the agent was really trying to remove people that could witness Trump talking and embarrassing himself. When the author is speaking in an omniscient style, I'm clearly listening to a work of fiction.

This writing brings an inside perspective that is rarely provided. I have to admit that this book was not only enlightening but revealing. I've read Maddis's recent book about his career. Having the author's perspective brings clarity to questions one may have after Maddis's book. the question still looms - who stifled the author's career?

Very disappointing, overly politicized and self-serving. It's one thing to be critical of our political leadership, it's another to be disrespectful. Don't waste your time.

When I purchased this book I was expecting to read an insiders account of strategic level decisions. What I found was a lower level staff guy who was bitter about his experience and felt he was somehow treated unfairly by senior members of the SECDEF staff. Sharing his story seemed selfish and self-serving. How an O5 in the military and then a GS15 as a civilian thinks he’s entitled to direct access to the SECDEF without screening from a General Officer and/or an SES is absurd and whiny. Secretary Mattis was correct in saying it isn’t worth reading.

An insider with firsthand knowledge of key decisions and moments in history, Very fair and thoughtful.

Narrator has marbles in his mouth.

I’m going to have to order this book on Kindle, because I just can’t listen to it for another minute. I typically listen at 1.25x speed, but even at 1.0, this narrator is rushed and garbled.

to understand the challenges of military leadership and the lessons we get to watch a maverick of chaos manage the most tumultuous administration we have seen in years. It is sad that there is a 25% gap in the administrative support needed but hope for the system to grow and stabilize. history and personality meet.

Interesting book. Finished this in 3 days. Gives people an idea what it's like to work in the Trump administration.

Yet another sellout looking to profit....

Do not spend your money on this book. There are no Trump administration revelations or anything new about Secretary Mattis. This is simply a story written by a low-level Pentagon staffer that was a speech writer. The author is hardly the patriot he wants the listener to believe. Sorry your military career fell apart but writing a sell-out book about the most regarded general of the millennium was not the answer.

Did not expect this to be an autobiography of Guy Snodgrass. It’s marketed as an inside scoop of the defense department under Mattis, yet content wise that’s only about a quarter of it. Speaking for myself, I’m not interested in a memoir of a staff officer.