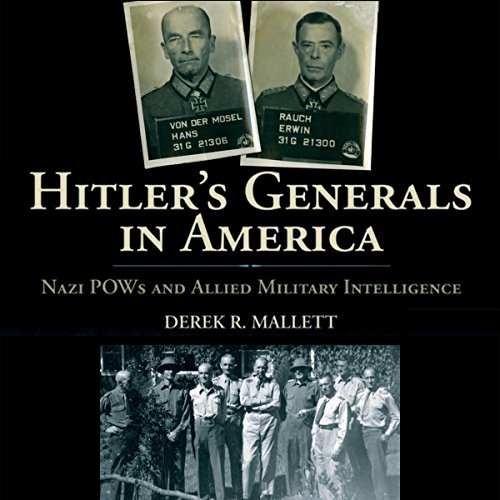 In Hitler's Generals in America, Derek R. Mallett examines the evolution of the relationship between American officials and the Wehrmacht general officers they held as prisoners of war in the United States between 1943 and 1946. During the early years of the war, British officers spied on the German officers in their custody, housing them in elegant estates separate from enlisted soldiers, providing them with servants and cooks, and sometimes becoming their confidants in order to obtain intelligence. The Americans, on the other hand, lacked the class awareness shared by British and German officers. They ignored their German general officer prisoners, refusing them any special treatment.

By the end of the war, however, the United States had begun to envision itself as a world power rather than one of several allies providing aid during wartime. Mallett demonstrates how a growing admiration for the German officers' prowess and military traditions, coupled with postwar anxiety about Soviet intentions, drove Washington to collaborate with many Wehrmacht general officers. Drawing on newly available sources, this intriguing book vividly demonstrates how Americans undertook the complex process of reconceptualizing Germans?even Nazi generals?as allies against what they perceived as their new enemy, the Soviet Union.

"A thrilling new treatment of the 'captive mind.'" (Günter Bischof, Marshall Plan Professor of History and Director of CenterAustria at the University of New Orleans)

"Stunning in its breadth and clarity." (Robert C. Doyle, author of The Enemy in Our Hands: America's Treatment of Prisoners of War from the Revolution to the War on Terror)