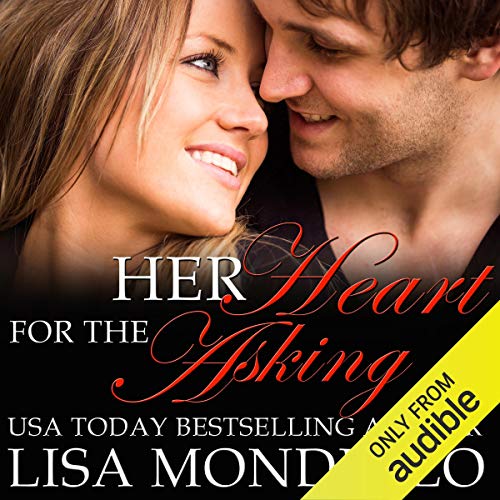 Her Heart for the Asking

Mandy Morgan swore she'd never step foot in Texas again after Beau Gentry left her for life on the rodeo circuit eight years before. But now her uncle's heart is failing and she has to convince him that surgery will save his life. She never dreamed the first thing she'd see when she stepped off the plane would be her biggest nightmare...the one man she'd never stopped loving.

Beau Gentry had the fever for two things: the rodeo and Mandy Morgan. But for Beau, loving Mandy was complicated by his father's vendetta against her uncle. This led him to make the hardest decision of his life and he can still see the bitterness and hurt on Mandy's face. All these years it has killed him to think Mandy had forgotten him and moved as far away as possible from him. But now they're back in Texas, and he's going to do all he can to win back her love.

"What are you doing here?" Mandy Morgan asked, dropping her too-heavy overnight case on the sun-roasted tarmac. After a grueling forty-eight hour work stint and a five-hour flight from Philadelphia, she stood wilting under the brutal Texas sun, facing her biggest nightmare.

She groaned inwardly, drinking Beau in with her eyes as if she hadn't had a drop of water in months. Eight years was more like it. If she were eight years smarter, she would be moving her aching feet as fast as she could in the opposite direction. But all she could do was stare at eyes so bright they rivaled the blazing sun. At lips so kissable she'd spent the better part of her adult life trying to wipe the memory clean from her mind.

What listeners say about Her Heart for the Asking

Eight years, eight years, eight years. Those two words were said 35 times, according to my iPad, in this 182 page story. I guess Ms. Mondello thought her readers were just too dense to remember that Beau and Mandy were apart that long so she felt the need to repeat it again and again.

And Mandy is still mad at him for leaving her when she was 16? Really? She’s mean and hateful at every turn, until 75% of the story, and she’s still acts like she 16. You’d think in eight years she would have a more grown up attitude.

This was a G-rated book. No sex and no swearing, no OMG moments, no nothing. Just a simple love story. I’m probably done with Ms. Mondello.

As to the narrator: Love, love, love Eric G. Dove. He does a fantastic job when he reads BUT not even Eric could help this book that much.

For teenagers. A waste of time for an adult.

I wish I had known this was a young adult romance before I bought it. I got it through a sale promotion for romances and it was not worth the sale price. It strikes me as something I might have written in high school.

The characters are one dimensional. What character development there is is very protracted and does not adequately explain the characters' motives or actions. Mandy over dramatizes the wrong done to her and her 8 years of grieving is not believable -- even for the most immature drama queen.

This book may appeal to a very dramatic teenager -- but it was a waste of time for an adult.