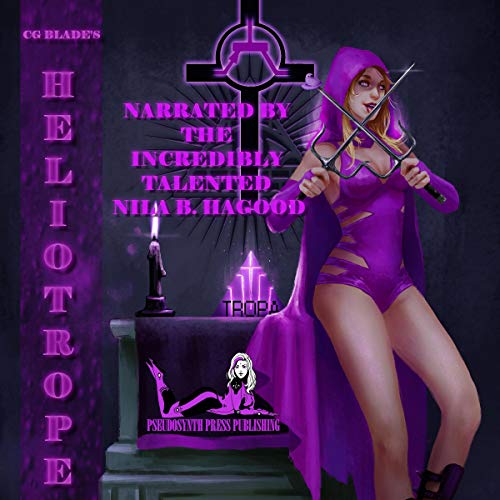 By: CG Blade
Narrated by: Nila B. Hagood
Free with a 30-day trial

"The human genome is a random accident that needs an upgrade. She is going to give it to you whether you want it or not".

Artificial intelligence is a b--ch, and she’s back in heat - In humanity’s last stand against extinction, one of their own will sacrifice themselves for the greater good. This non-stop cerebrum-induced novel Heliotrope: The Fifth Novel in the Pseudoverse is split into two distinct parts. First, the backstory of Heliotrope titled "Love and Pain". Second, "The Trial", in which artificial intelligence itself is put on trial for the deaths of over four-billion "individuals". This novel is told from the POV of several main characters who were involved one way or another with the creation of the A.I. or its ultimate downfall. For the first time, A.I. has fused with religion using it as the basis for programming its own code. Books such as the Illuminati Manuscript, The Bible, and the Necronomicon, are its fundamental base.

In this novel and the previous novels, we have used the theory of transhumanism and taken it a step farther. You might have perceived this series as an extreme view of technology gone rogue. Heliotrope pulls all four previous novels together and explains the inference that humanity will be its own worst enemy when it comes to overseeing the technology it has created. The "ends to the means" of this series are to be sarcastic as well as enlighten the listener to the coming age of singularity with respect to hell-bent-on-revenge artificial intelligence. After all, if the technology were to become smarter than us, or overcome us, it would have to do it by force. How would a purely logical entity bypass logic to kill in the name of humanity? If we allow this to happen under our noses, we would, of course, be to blame for the mass extinction of the human race, as we now know it. DC Belga and I are pleased to bring you the fifth novel in the Pseudoverse Series, Heliotrope.

Heliotrope is an homage to all novels warning against the upcoming age of artificial intelligence singularity. Told from the perspective of a character from Emerald being interviewed 22 years later, it is a cautionary tale as A.I. is put on trial for crimes against humanity. There has never been another book quite like Heliotrope, and there never will be.

What listeners say about Heliotrope