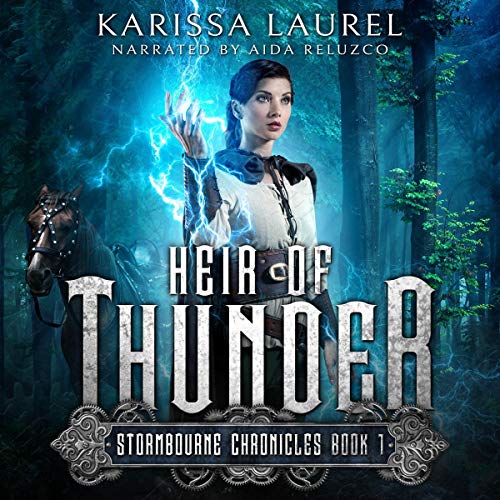 By: Karissa Laurel
Narrated by: Aida Reluzco
Try for $0.00

The Lord of Thunder has passed, leaving daughter Evelyn Stormbourne to overcome her kingdom’s greatest enemies, but first she must embrace her dominion over the sky.

The Lord of Thunder’s sudden death leaves his daughter, Evelyn Stormbourne, unprepared to rule Inselgrau in his place. Weeks before Evie’s ascension to the throne, revolutionaries attack and destroy her home. She conceals her identity and escapes under the protection of her father’s young horse master, Gideon Faust. Together they flee Inselgrau and set sail for the Continent, but they’re separated when a brutal storm washes Evie overboard.

In her efforts to reunite with her protector and reach allies on the Continent, Evie befriends a band of nomads who roam the world in airships fueled by lightning. She also confronts a cabal of dark Magicians plotting to use her powers to create a new divine being, and she clashes with an ancient family who insists her birthright belongs to them.

If she’s to prevail and defeat her enemies, Evie must claim her heritage, embrace her dominion over the sky, and define what it means to be Heir of Thunder.

What listeners say about Heir of Thunder

Incredible narration and a compelling and gripping story

This fast paced story grabs you from the beginning and takes you on a whirlwind journey complete with elemental magic, intrigue, love, and friendship.

Reluzco’s narration brings it all to life with her smooth and sonorous voice including passages in foreign languages and accents including Spanish, French, Irish, and German. My only critique is the “steampunk” content doesn’t play prominently or at all for the first half or 2/3 of the book. Curious to hear how the story unfolds in the next book in the series.

This book starts pretty quickly which I loved. Often first books in a series take the first few-several chapters to lay the groundwork for the series, but this one kind of throws you in and explains as you go. There's plenty of action to keep the story going but not too much to make it feel unbelievable. The basis of the story is a royal princess (spoiled and sheltered) is on the run from revolutionaries that wish to get rid of her after her father's {Lord of Thunder's} death with a bodyguard that was the royal Horse Master. She has to grow up fast and learns a lot of hard lessons along the way. It's well written and the narration is fantastic. The only thing that bothered me a bit was that this brand new fantasy world was mixed in a strange way with ours that at times didn't quite add up, but honestly, it didn't bother me that much... I still was completely sucked in and am really looking forward to the next book.

This is a relatively clean book, no language, no sex, there is mention of what being sold into slavery for women looks like and there is some fighting and violence both nothing I would be overly concerned about for my kids. I would place it as a middle school age read, YA to an adult level. If you like fantasy and mythology then this is a great one to start.

I raced through this audiobook, swept away by the captivating narrator! Can't wait for more!

What a rollercoaster of a book!!!

I was given this free review copy audiobook at my request and have voluntarily left this review. This book is so interesting, entertaining and annoying all at the same time. It opens new avenues of thought and keeps your mind wondering what will happen next. Looking forward to seeing what will happen to Evelyn next.

Loved all of the accents! Very much looking forward to listening to the next one!

Generally quite good but...

The premise of the story sounded great: an heir to the throne made to run for her life, protected only by a young servant whose motifs are unnervingly unknown to her, then separated from him, falling from one peril into another... Should have made for a great, gripping story - but... whereas some parts of the tale do keep you clinging to your listening device some other seem too rushed and too shallow to keep your interest as intensely...

Generally it is a story full of adventures, with the main character of Evelyn discovering her skills, abilities and powers as we go along, overcoming the perils that come her way - and it's one of the good points of the book. Evelyn does grow up, does learn how to stand for herself and for others, learns that trust should be earned, not given, if she is to survive what comes her way. The secondary characters - at least most of them - are diversified, colourful, unique and represent different classes and professions (such as you may expect to find in a fantasy novel). The pace of the story is mostly good though there are a few places where the tension slacks, where what should be a highly emotional scene feels flat somehow...

There's one thing though that I can't understand or forgive, the thing that strongly jarred for me when listening. If we are supposed to believe the book is set in an obviously new fantasy world, with places and nations having really strange names, then why is it so obviosuly Britain, Spain, France and Germany that the action takes place in? The characters speak with Spanish, French and German accents, the countries on the Continent and Evelyn's home island are geographic equivalents of the aforementioned countries, even the nomads Evie lands with at one point are just European Gypsies, the only difference being their travelling by air not by land... Why not make the story alternate Europe instead of coming up with names we can't pronounce or write down? It would have been much more plausible and believable...

So generally I'd say it's one of those books that I don't regret reading/listening to, as there are quite a few good moments in it but it's not one of these I can't wait to jump to the next one in the series, either. You'll have to grab it and see for yourselves if you like it enough to continue with the series.

As for the narration, it's generally very good. The pace is all right, voices mostly well done, and there's quite a bit of good acting in the dialogues, too.

Great story of a young princess coming of age and learning about herself. I thoroughly enjoyed it!
Aida Reluzco as the narrator did a fantastic job and I can’t wait to hear her narrate the rest of the series.

YA fantasy with airships!

This first installment of the Stormbourne Chronicles is a tidy, well written YA fantasy, with steampunk seasoning that, along with the incredible food described throughout, leaves you a bit hungry for more.

Our main character, Evie Stormbourne, goes through a LOT of pretty traumatic experiences and grows from spoiled, staggeringly sheltered and ignorant, to a capable young adult forced to make hard choices to save herself and people she cares for. And unlike the character arc of an unrelated character with a similar name from a different series, the changes in this Stormbourne make sense!

The action in the book starts rather quickly, and stays pretty consistent throughout, without being exhausting.

The narration by Aida Reluzco was very well done.

I'm hopeful that the next book, Quest of Thunder, is released soon in audio!