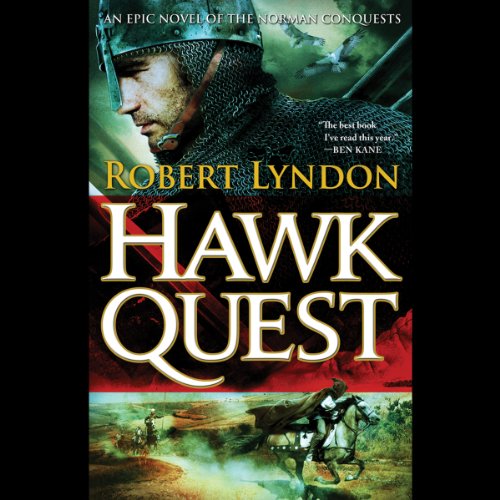 The year is 1072. The Normans have captured England. The Turks have captured a Norman knight. And in order to free him, a soldier named Vallon must capture four rare hawks.

On a heart-stopping journey to the far ends of the earth, braving Arctic seas, Viking warlords, and the blood-drenched battlefields, Vallon and his comrades must track down their quarry one by one in a relentless race against time.

The scale is huge. The journey is incredible. The history is real. This is Hawk Quest.

What a fantastic heartstopping adventure!

What did you love best about Hawk Quest?

Robert Lyndon reaches out and grabs theinterest of his reader within the first few minutes of the book. He weaves his character's in such a way that you cannot help but become personally involved in their lives. You find yourself loving andhating them and rooting for them all at the same time. This is a masterful work, and the best 28 hours of reading I have done in a long time.

What was one of the most memorable moments of Hawk Quest?

One of the main character's has an extraordinary connection with his dog, and Their love and respect for one another draws you into the relationship with them. They find themselves in hairraising situations and you find that your heart is pumping at an alarming rate as you live the adventure with them. I won't give anything away, but the most devastating scenes involves these two endearing character's. Robert Lyndon is a masterful storyteller, and you come away from each of the heartstopping predicaments the character's find themselves in feeling as though you were right there with them as one of their team.

Fleet Cooper brings the author's character's to life in such a way that you begin to feel as if you are standing right there along side them as they make life altering decisions in the blink of an eye. He mastered the accents of men and women from all corners of the earth set in the year 1072. He effortlessly moves between anywhere up to five to seven different dialects of the various characters all dialoging with one another without missing a beat. What a memorable performance Fleet Cooper has given to Robert Lyndon's masterpiece of adventure. I particularly enjoyed the character of theFrench captain, who's chivalrous heart made for an endearing and unforgettable character.

If you could rename Hawk Quest, what would you call it?

The book is very well named. I wouldn't change a thing.

If you enjoy an intelligently written adventure that captures the very essence of life in the 11th century, then Hawkquest will steal your heart. The author's attention to detail and brilliant descriptions of the landscape and life in the untamed lands of the time period, creates such an intricate balance of friendship, honor and redemption that you cannot help but root for and come to love these unlikely traveling companions.

Would you listen to Hawk Quest again? Why?

Yes, it is one of the best books I have listened to in the past year or so. A good storyline, believable and interesting characters set in an exciting era, and; they're on a good quest,

Vividly depicts how life may have been in the era.

Nothing. A very good narrator.

I love historical fiction, the longer the better, but it must be good and believable. This is such a listen; a whole 28 hour long - brilliant and captivating.
If you like Bernard Cronwell, Jack Ludlow, Rob Low and Philippa Gregory, I think you will enjoy this.

but you really must give it a chance. It takes a good couple of hours and there were a few parts at the beginning that I had to listen to twice, but once in, you're in. A great epic.

It is a great book, complex, many in depth characters. Only knock on it is because of its length, there are parts where the story does drag a bit.

What was one of the most memorable moments of Hawk Quest?

Who was the most memorable character of Hawk Quest and why?

He young and super smart, expert with animals, husbandry and supposedly he was raised by wolves

Love the whole 29 hours of it, lots of characters and travels, faves will be lost and least faves linger.
One of the best!!!

Something Different in Historical Fiction

If you’re big on historical fiction, you may have read Louis L’Amour’s The Walking Drum, which is still one of my favorite historical fiction adventures. This book is modeled in a very similar fashion. A quest, a journey part merchant, part warrior tale, part scholar in the Middle Ages. The book isn’t perfect, but it’s well worth the credit. In exchange you get a story filled with adventure that tears across the globe from Iceland to the Middle East.

Couldn't Put This One Down

The Lord of the Rings, although that work is really in a class by itself! . This work is a quest, it takes the reader from Britain, to Greenland, France, Italy and ends in Constantinople, and it has strong and unlikely central characters.

Have you listened to any of Fleet Cooper’s other performances before? How does this one compare?

No, and I found the narrator to be excellent.

Who was the most memorable character of Hawk Quest and why?

Vallon - he has a deeply hidden past, and is unpredictable.

Loved it! Exceptional story and narration!!

Where does Hawk Quest rank among all the audiobooks you’ve listened to so far?

After listening to over 50 books within the past year this one is definitely one of my favorites.

This incredible epic journey reminded me of The Last Hero. Both have amazing narrations in addition to a great story that is filled with drama, excitement, sadness, adventure and more.

Wayland (sp?) captures your heart with his sweet and honest spirit. Raul (sp?) the German is funny and endearing.

I was so into each character through Fleet's impeccable performance. There were so many different characters yet he never faltered or missed a beat between voice changes. There were so many tense moments and unexpected twists. I caught myself laughing and in the same breath I was overjoyed or tearful of the outcome.

I really hope there will be more books by this author with Fleet Cooper as narrator. It's rare to have that perfect combination with audiobooks- some great stories are ruined by narration. Well worth the credit and time!

Fallon. I could picture a number of actors playing him.

Sex scene, of coarse. I could picture the entire book.